When introduced to Gabe Eggerling, a young actor on the brink of his teen years, it’s very easy to tell that he’s one-of-a-kind. His demeanor over the phone is professional, yet very sweet and nice. From the moment he greets the person on the other line, there’s an instant feeling of comfortable excitement that takes over the conversation.

Teenplicity had to opportunity to experience this firsthand in June, when discussing his Amazon series “The Kicks”, based off of the series of books by soccer superstar Alex Morgan.

Gabe explains the concept of the show, “‘The Kicks’ is a family show about a family that moves from the East Coast to the West Coast, and they’re just trying to adapt and fit into the new lifestyle.” His pride in the show is the reason he continues on. “It focuses more on the main character Devin [Sixx Orange], who is my sister in the show. And it’s about her making friends through soccer as well as the rest of the family trying to fit in with everything going crazy all around them. It’s a pretty cool, light-hearted show.”

“Bailey is very laidback,” Gabe describes with a laugh. “Everyone in the family is having problems doing this, and Dad’s having problems with work and Mom’s trying to make friends and his sister’s trying to do soccer stuff. Bailey’s just sitting there, relaxing, and doing schoolwork and videogames.” He calls that Bailey in a nutshell.

“Similarities definitely outweigh the differences!” he exclaims as Teenplicity asks Gabe to compare himself with his character. His laugh is easy as he says, “I feel like I’m basically Bailey.” Both himself and his character love photography, amongst other things. “We’re both very tech-savvy and we like social media. We both like video games and we’re both really smart with school.” There’s a slight pause before Gabe admits that he can’t really think of a difference, except that his character is more laidback than he is.

Even through the phone, it’s easy to tell that the level of excitement in the conversation has risen when Gabe begins to describe what he’s most excited for fans to see in “The Kicks”.

“One, I’m just excited for people who want to watch the show to finally get to see the show,” he begins, his voice just laced with bubbling excitement. The pilot for the series was actually released on Amazon last June and the anticipation for the show has been building since. “I’ve seen a lot of people really excited to see the show so I think they’re going to love the show.”

Almost impossible to imagine prior but the excitement that pours from Gabe’s voice is through the roof as he reveals the third reason he can’t wait for fans to see the show.

“Three, the soccer is AMAZING! All the soccer shots-” Gabe cuts himself off, nearly flustered with excitement as he tries to express the great action that was caught on camera, “-it’s amazing to see! That’s what I’m excited for [fans] to see.”

The entertainment industry is nothing new to this young star. In fact, his talents are seen in more ways than one.

With a large experience of voiceover for his age, Teenplicity couldn’t help but find out what the major difference between voiceover and live-action acting is like. 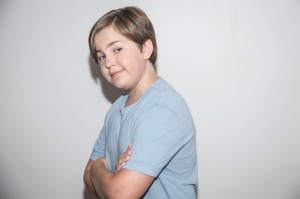 And though switching between the two mindsets is easy for Gabe now, that wasn’t always the case.

“I used to,” he says about having difficulties switching. “I’d go in and do a voiceover audition or record a voiceover job and then I’d go to a theatrical audition where I have to be serious and natural, like a drama show. And so I’d really have to get into the mindset that I’m not recording happy and jumpy and I can’t pitch my voice up – I just have to be natural. It used to be kind of a big factor but now it’s not that hard to do it.”

A favorite question of Teenplicity’s to ask stars of Amazon and Netflix original series’ happens to be their preference on binge-watching a series verses waiting week by week. The topic of binge-watching brings the excitement out from Gabe once more.

“I love the idea of binge-watching!!” he exclaims. It’s easy to assume that he’s a binge-watcher himself, which he does admit later. “It’s just a great concept for places like Amazon to release a series at a time.” He reveals that he watches a lot of shows that have already aired or are an original series to a platform like Amazon Video.

“My top three [shows to binge] are ‘Gilmore Girls’ – that’s my number one show,” he starts, getting slightly off-track to express his adoration for the show. “‘Gilmore Girls’ is amazing!” he enthuses, to which Teenplicity has to agree 110%. “And then I like ‘The Flash’ and ‘Arrow’. Those two are really good too,” Gabe says of the CW series’. “I just love the idea of being able to watch shows, and watching four episodes of a show whenever I really want.”

(For those fans who were wondering, Gabe is as excited as the rest of the ‘Gilmore Girls’ fans for the four-part special coming to Netflix. He cannot wait!)

Philanthropy is a large part of Gabe’s life and when the conversation shifts to this, there’s a new, unique passion to Gabe’s voice.

“I think my favorite part of being a philanthropist is how it makes me feel,” he expresses as he speaks with all of his heart put into it. “When you go and help someone, you feel great. I don’t even know how to explain how you feel – but you just feel kind of warm because you get to make a kid smile or someone happy and I think that’s just great.”

Gabe reveals that his voiceover work actually led him to his philanthropy work. He says that he’s an avid reader, and that he started to read at a really young age. “I realized that doing my voiceover, I could use those voices and then read a book to kids that would want to hear a story like that. So then I joined an organization called SAG BookPALS. They send actors that are in SAG to different schools that are in Southern California and they read to kids at elementary schools.” It was around the age of seven that Gabe joined, being one of the youngest readers for four years. It is with BookPALS that Gabe cites at the start of his philanthropy.

“I’ve learned that you have to ask for help a lot,” he says of what his philanthropy work has taught him. “I’ve had to ask for a lot of help from different people. Like I’ve asked Jim Carrey if I could read his book when I gave my TED Talk and that helped a lot. And I asked BookPALS to let me in, even though I was too young, and they let me in.” Gabe believes, “I think that asking for help is really needed if you want to succeed. You can’t be afraid to ask for help – you have to be brave. That’s one thing I’ve learned about myself.”

The way Gabe speaks of his work is like a person who has been doing it for decades. His passion for it does not waver in the slightest, and, still not yet a teen, his wisdom is already far beyond his years. It’s because of this that Gabe is asked what he hopes his fans gain from seeing him as a philanthropist.

“I want them to understand that kindness really matters,” he says in an instant. “I mean, if you just smile at someone across the street and they’re having a bad day, they’ll smile back. It [might be] a little weird but it’ll kind of help them get through their bad day. And being nice to people – you don’t have to honk your horn on the freeway because it just makes everyone stressed and if you’re just nice, then nobody’s stressing and everyone’s happy.”

“So I feel like kindness really matters and I want to inspire people to start becoming philanthropists all around the world,” Gabe says, the hope and excitement clear in the passion in his voice. “As well as start being kind and giving back. That’s what I hope my fans will see from my philanthropy.”

All of Gabe’s work as a philanthropist thus far has already made quite the impression on some. Famous photography John Russo insisted on featuring Gabe in his charity book “100 Making A Difference”, which features people like First Lady Michelle Obama and talk about their positive impact on the world.

“It’s crazy,” Gabe says with a laugh that expresses his disbelief and joy. “It feels so cool to be in a book with Michelle Obama and Dwayne ‘The Rock’ Johnson.” Another laugh is released as he continues, “I mean, seriously, I don’t even understand how I got in the book but I just think it’s awesome. I did a job with John Russo a long time ago and so he was taking pictures of me and he said, ‘Hey, why don’t you be in this book?’. [It was] because he as learning about my story. I said, ‘Okay, well, that’d be cool.’ And so I think it’s now two years later and the book is going to be out in September and,” Gabe can’t help but let out another disbelieving laugh as he concludes with, “I just think it’s crazy!”

While Gabe sits in excitement for the book to be released, he can finally chat with fans all about “The Kicks” which is available today on Amazon. The show is finally here and he can’t help but thank his fans for their support with his career and philanthropy.

“It makes me feel so good,” he says of the support of his fans, the flustered excitement returning to his voice.

With one last question, Teenplicity asks him what special message he has for his fans.

“The Kicks” is available to binge-watch on Amazon Video now!

To keep up with all of Gabe Eggerling’s projects and philanthropy work, be sure to follow him on Twitter!

**Above photo credit to Bobby Quillard