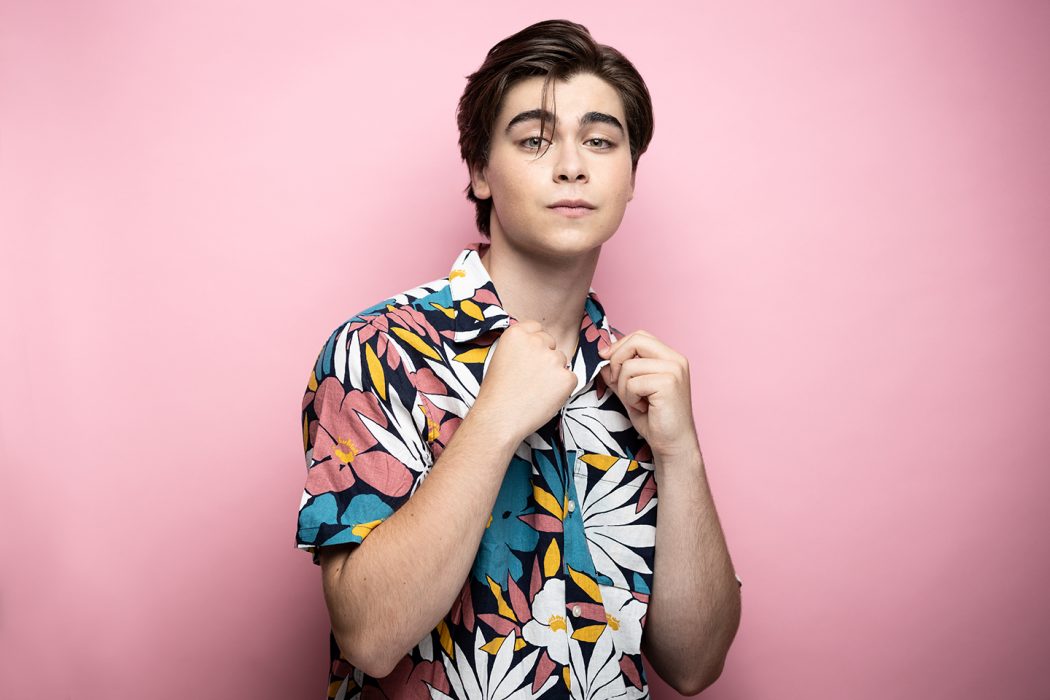 When Josh Zaharia was cast for a recurring guest role in the third season of the Apple TV+ series Ghostwriter, he got to showcase more than just his acting skills.

A reimagining of the 1992 Sesame Workshops series of the same name, Ghostwriter explores the developing friendship between a group of kids as an entity they dub ‘Ghostwriter’ brings fictional characters to life to solve the exciting mystery around its unfinished business.

Josh guest stars as Leo from Pablo Cartaya’s book ¡Leo! El Magnífico. Describing his character, he says, “[Leo is] a worldwide famous magician from the book by Pablo Cartaya. He’s suddenly teleported into the real world to help solve a mystery.”

He continues. “Leo goes through an exciting and powerful journey this season. When we first meet Leo, we see the facade he’s putting on and only think of him as an egotistical showman who only thinks about himself.” There is more to the magician, according to Josh. “Over the course of the show, we start to figure out how he got to the position that he is in his life. We learn about his sacrifices to get to where he is and how he may regret his past actions.”

The young actor shares that he worked closely with their director, Luke Matheny, and the author of ¡Leo! El Magnífico, Pablo Cartaya, to bring the best interpretation of Leo to life. “I wasn’t very familiar with Pablo’s work up until then,” he says. “During the audition process, I wasn’t aware I was auditioning for Ghostwriter. We were using a code name during the whole audition process.” He explains that he was given a character description for his initial audition which was expanded as the process continued. “Once in the callbacks, we went more in-depth with Leo’s past.”

The actor adds, “I got to meet Pablo in the final callback and I’m so thankful that he and the rest of the team working on the show trusted me with playing this incredible character.”

He explains that once he booked the role, magic lessons from production began immediately, as did his work with Luke and Pablo, “to learn more about Leo and what makes him tick.”

There were two things, though, that helped him with getting to understand Leo. Firstly, he already had a basic knowledge of magic. “I’m a big fan of magic, so playing a magician in the show was so much fun and exciting for me as an actor.” He shares, “A requirement before the audition was that for the role, they needed someone who already knew some magic. I had already been practicing magic for some time before and once I booked the role, I got magic lessons both before and during filming.”

Secondly, he speaks Spanish. Born in Canada to Peruvian immigrants, the young actor takes pride in his roots. “I love Peru! My whole family lives there, and I usually go to Peru yearly,” he says. “I would have to say that besides seeing my family, my favorite part about Peru is the food.”

His Spanish-speaking fluency (one of three languages he speaks, the others being English and French) is on full display in the show, something which excited him. “I was so happy when I learned I would use my Spanish in Ghostwriter. Leo speaks plenty of Spanish throughout the show, and I got to show more of my Spanish speaking skills.”

“There are so many characters!” Josh gushes. “I’ve always been a massive superhero fan, so I might have to go with a character from Marvel or DC! I would love to bring a Young Avenger to life or maybe even the Teen Titans.” He mentions later that being a part of the Marvel Cinematic Universe or DC Extended Universe as one of their superheroes would be his dream role.

Continuing, he says, “I’m also a fan of literature so I would love to be a part of adventure book franchises like Percy Jackson, Land of Stories, Scythe, etc..”

However, if a role as a superhero is in his future, Josh already has the foundation for that.

Earlier this year, he portrayed Young Butcher, the younger counterpart of Karl Urban’s character in Amazon’s hit show, The Boys. Going from more family-friendly shows like Ghostwriter to something more mature like The Boys is easy for Josh.

“Even though both shows are for very different audiences, when it comes down to filming, there is the same amount of professionalism and care put into the show,” he explains. “Both shows were great to work on. Everyone on set was so welcoming for both productions, and it was such a positive environment. For both projects, we touch upon very sensitive topics.”

Josh goes on, sharing further, “For The Boys, we deal with Butcher’s father’s abuse towards him and his brother, sadly leading to his brother’s suicide. For Ghostwriter, we talk about racism and the refugee experience. Both shows spark meaningful conversations, and the whole crew for both productions took these topics very seriously when filming. I feel very humbled to be a part of two projects that are so different and incredible in their own way for vastly different audiences.”

The variety of sets and shows that he works on offers plenty of opportunities to learn. A performer since he was young, Josh has always been fascinated with storytelling. The use of action figures and Lego pieces to perform shows in front of his parents has transitioned to writing scripts and short novels. “My acting career has helped me so much in developing my skills in crafting my own stories,” he says.

“When I get a script for any production, I’m always glued to the page, reading the whole script in one sitting. I love reading the scripts – so much so that after I’m done reading it, I reread them! With each page, I analyze the arc the character is going through in that scene. Every description, dialogue, and even the slightest word is looked into in depth. With each new production, I feel like I’m learning something new and growing as an actor, storyteller, and person.”

It echoes the passion at his core, and why he loves acting so much. “Since I’ve been young, I’ve always loved entertaining people. Telling stories that can make people feel different emotions. When someone comes up to me and says, ‘We loved your work and could relate to your character and their struggles,’ or ‘This is my favorite movie,’ it’s just the best feeling in the world to know that something I did has positively impacted someone.” Josh says. “If there is any way that my projects can make the world a better place and bring a positive message, that’s the real magic.”

While he’s not sure what the future may hold for him over the next couple of years, Josh has plenty in mind for what he wants to do.

“There are so many things I want to accomplish in the next 5 to 10 years. I want to continue acting and doing what I love. I would also like to work behind the camera, directing and writing my own scripts and stories.”

The actor is leaving the door open to consider any opportunities that come his way. Given his passion for singing, TEENPLICITY then asks if that includes performing in a musical.

“I would love to be a part of a musical, and that’s definitely on my bucket list for projects I want to do in the future,” Josh shares.

TEENPLICITY: What is your favorite Halloween candy?

Josh: Don’t know if it counts as a Halloween movie, but I love [The] Black Phone!

Ghostwriter is available to stream on AppleTV+ now!