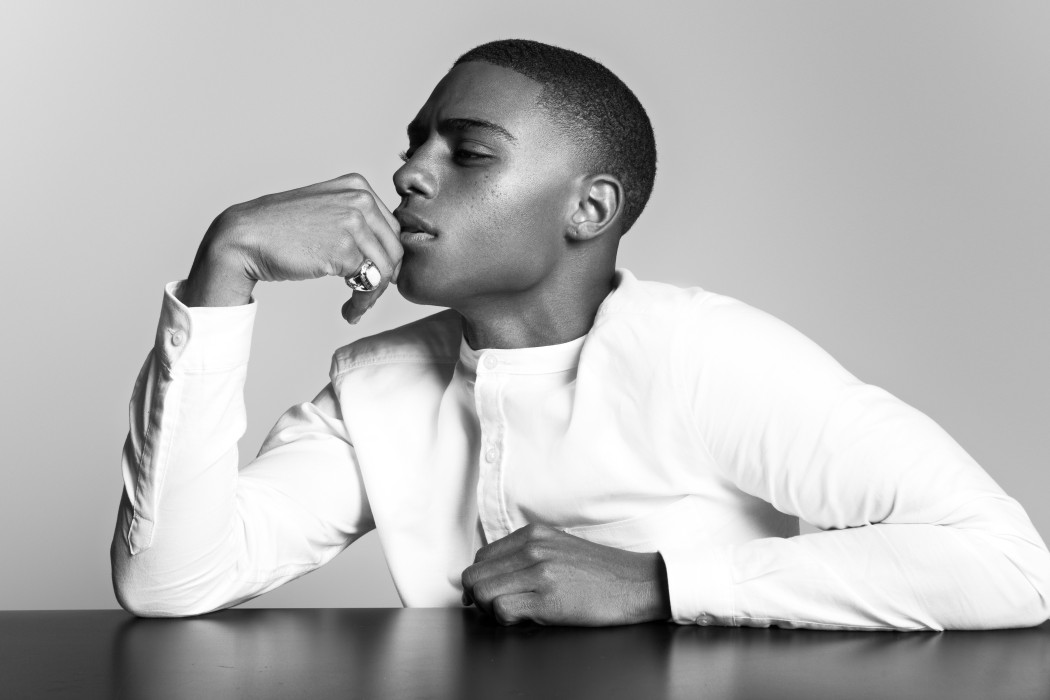 Born and raised in Sacramento, California, Keith Powers is a force to be reckoned with. From being an amazing model for GQ, Target, and even Calvin Klein for Milan Fashion Week to being credited as a talented wide receiver originally destined to attend a prestigious college football program and then a wonderful actor starring in MTV’s Faking It and now, Yahoo Screen’s Sin City Saints.

I got the chance to talk to Keith, not only about his new role as rookie basketball player LaDarius Star, but also about his dream roles, and what it was like filming his next upcoming project Straight Outta Compton.

Keith Powers: My favorite thing about Sin City Saints is the cast chemistry. Our chemistry compliments the crazy-ness of the show. I also love that anyone can watch the show. You don’t have to be a basketball fan, it is for everyone.

T: What amazed you the most when shooting the show? Do you have any moments that you remember the most?

KP: What amazed me most was how hilarious my cast mates were. I also loved how great of actors Baron Davis and Rick Fox are, being former NBA stars and acting being second to that craft. It’s fantastic to see athletes able to act as well as they do. True talent. My most memorable moment is doing a scene with Tom Arnold and I could NOT stop laughing. It was hilarious, so I was really just trying to get through the scene.

T: Did you have to do any training of any kind to prepare for the role?

KP: We had basketball practice once and that’s all I really needed. I play pickup basketball for fun.

T: What can we expect from your character LaDarius Pope? How is he similar or different from other roles you’ve played?

KP: With LaDarius Pope, you can expect something you wouldn’t necessarily think you would see from a young NBA star. He’s very romantic, caring, sensitive, he’s a mama’s boy and he’s also kind of a brat. He’s hasn’t really experienced life because basketball is his life. So Vegas is not going to help that. He’s different from the other characters I’ve played because he’s very sensitive and not as confident as you would think. It’s the other roles I’ve played show that confidence.

T: When it comes to picking roles, how do you decide what you’re looking for?

KP: I don’t get to pick all my roles at the moment but honestly I like to play someone that’s nowhere close to what I am in real life. I love becoming someone new and that’s why I love acting. LaDarius is actually very different from who I am in person, except the fact that he loves sports.

T: You’re also starring in Straight Outta Compton coming out later this year in August, did you grow up listening to N.W.A.?

KP: I actually did grow up listening to NWA, my parents are huge fans. My dad has old pictures of himself dressed up like NWA, so the influence was strong and we love Dr. Dre.

T: What are you excited for people to see when they watch the film?

KP: I’m excited for people to see the truth behind this story. This story is important for people to know. This group pioneered for west coast hip hop and gangsta rap and standing up to the law and for justice.

T: We know you were discovered by a modeling agency when you were nine, but were there any challenges you faced trying to pursue acting?

KP: Yes, there were challenges. I couldn’t understand how you can do your best in an audition and still not get the role. Or get so close- but keep getting shot down. It takes the life out of you, but you have to stay faithful and confident and continue to push. I also struggled with annunciating my words. I’ve been improving!

T: Is there a dream role that you wish you could take on?

KP: I would love to be a superhero, but I really also want to play Michael Jackson in a biopic. I think I can do it and I love Michael Jackson. That’s my dream role.

T: Has there been any artists/movies/music etc. that inspires you?

KP: Yes there’s so many films that inspire me, it’s hard to say… but as of late I was very inspired by Selma, Gone Girl, and Wolf Of Wall Street. Leonardo Dicaprio inspires me, I’m a huge fan of Heath Ledger and the work he did on Dark Knight. He was so amazing. Lastly Denzel Washington. I love Denzel and also Will Smith of course.

Finally, we asked Keith if he could list us 5 things nobody knew about him/wouldn’t expect from him:

All 8 episodes of Sin City Saints are streaming now on Yahoo Screen.

Season 2B of Faking It is set to premiere in April with new episodes on MTV.