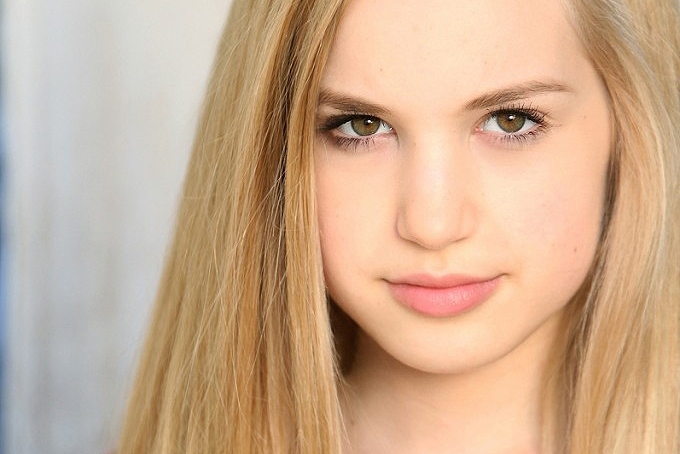 At the age of 14, Brady Reiter’s already making a name for herself with Nickelodeon’s new show 100 Things To Do Before High School.  The show–which has been compared to Ned’s Declassified School Survival Guide for its nostalgic setting–follows young CJ Martin and her two best friends as they tackle their middle school bucket list. Brady plays Mindy Minus, Pootatuck Middle School’s mean girl and the show’s antagonist.

Despite being an antagonist, Brady assures us that Mindy is not just a two-dimensional villain, explaining that Mindy “has a heart and a more sensitive side. Most mean girl characters are kind of superficial, but there is more depth behind Mindy.”

“At the beginning it definitely was hard to get into the mindset of a character that is so different from me,” Brady admits. “The producers and directors always had to remind me ‘Brady, be meaner!’ Since I’m not mean like Mindy, I would sometimes slip out of that mean girl mindset. But now that we’ve filmed so many episodes, I’ve gotten the hang of it and I’ve figured out how to switch from myself to Mindy.”

While getting into the mindset of a mean girl can be difficult, Brady shares that Mindy’s wardrobe is a definite plus, saying, “I love her outfits- she’s such a fashionista!”

“I’ve been acting for most of my life,” she says–since the age of five!–“so I can’t even imagine what life would be like without it. Acting is my passion, and I’m so grateful to have the opportunity to pursue it. At times it does get hard, having to balance school and acting, and still being a normal kid and hanging out with my friends, but it’s so worth it.”

Even without the pressure of everything else, being on 100 Things is quite hectic.

“A typical day on set is crazy!” Brady shares. “When I get there, I eat breakfast and usually go straight to hair and makeup, and then I get dressed into my wardrobe. After that, I either go to the school room or to the stage to start filming! The rest of the day, I’m constantly going back and forth from the stage to school, or to wardrobe changes or hair and makeup touch-ups!”

In addition to running around on set all day, Brady recently went back to her old school to sign autographs, which she describes as “absolutely surreal. I used to be just a regular student at that school, so it’s so weird that now the people there are watching my show on TV!”

More than that, though, Brady is excited for people to finally see the end result of the cast and crew’s hard work. “”We’ve been filming for so long and we can’t tell anyone about the storylines,” she says, “so I’m so happy we finally get to share it with everyone! I’m also really looking forward to getting feedback about it.”

On 100 Things To Do Before High School

With many of Nickelodeon’s fan favorite, female-led shows having run their course–iCarly and Victorious just to name a few–100 Things attempts to fill that void. “100 Things is an awesome example of girl power!” Brady says. “While most shows usually have a boy as a leader of a group, CJ is the leader of her group of friends, and she always comes up with plans and takes action. Even though she is mean, Mindy is very strong and doesn’t let anyone stand in the way of what she wants. Also, Principal Hader shows that a woman can be a boss and be in charge. CJ, Mindy, and Principal Hader are strong female characters that show girls they can do anything.”

When asked who she’d like to have on the show, Brady chooses to bring even more girl power–“Betty White. I would love for her to play my grandma!”

10 Things Brady Reiter Thinks You Should Do Before High School

1. Go to a school dance.
2. Try something new.
3. Create memories with your friends.
4. Join a club.
5. Go on a school trip.
6. Make a new friend.
7. Find your passion.
8. Experiment with a new style.
9. Challenge yourself academically.
10. Volunteer to help your community.