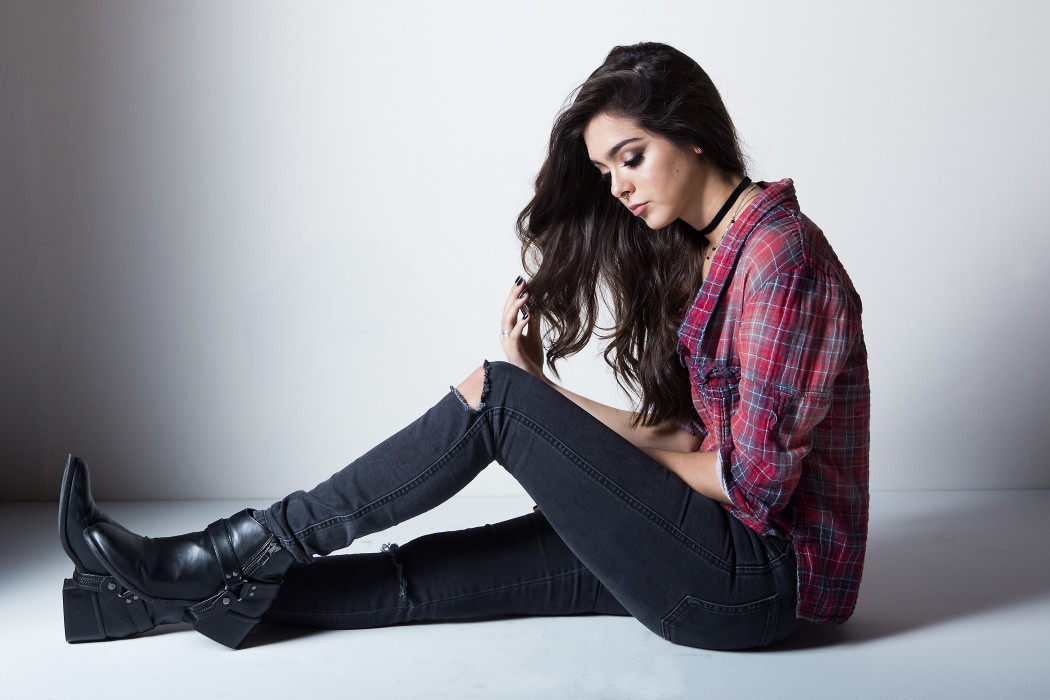 In our interview with Sammi last summer before she embarked on Megan Nicole’s “Sweet Dreams” tour, she talked about how her she handled her shyness as she began pursuing her dream of being a performer. Sammi admitted that she didn’t believe she was good enough to get into the Professional Performing Arts School in Manhattan which helped her develop her craft starting out. 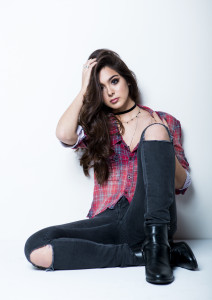 Now an established up and coming pop star, Sammi can officially add, ‘songwriter’ to her title as well with her new single, “I always kind of wrote, I was more of a closet writer. It wasn’t until, maybe, a few months ago actually, that I felt comfortable showing people my writing.” Even though she’s been writing music before her new single, “Girls Talk,” she didn’t consider herself a songwriter until a few months ago when she began sharing her writing.

Sammi needed to garner up the courage to share the songs she wrote, but when she did, the responses she received is what made her want to continue. “I definitely think being in a room with other writers and people telling me, hey, this is actually good, you should–like when people give me tips and stuff. I guess people giving me feedback made me feel more confident,” She revealed. “And also learning from others, you know, being in the studio so much, learning from other writers, I think that’s what really builds my confidence in writing.”

Listening to Sammi’s music, you’d see/hear an energetic, fiesty, electric personality. While her personality is just as strong, bubbly, and passionate off stage and out of the studio as it is on, Sammi admitted a lot of her poise comes from her music. “I still am a shy person like when I meet people, but it’s kind of like that comfort that I get within in the music,” Sammi responded about if she’s become more assertive since working in music. “I guess within like the music industry, it’s all about the music and I think that’s where my comfortable self is. So I think, definitely around that I would seem more, extroverted, I guess. But, like anything other than music, I’m normally like a quiet person. It takes time for me to get out of my shell a little bit.” 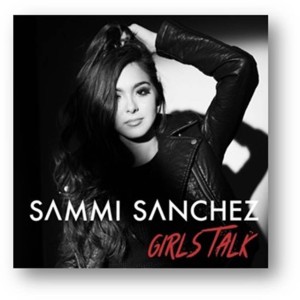 After hearing “Girls Talk,” co-written by her, you could never tell just how shy she is. The song has an upbeat, chill dance beat as she exposes a guy for trying to play her and two other girls at the same time, “It basically started out, it was a real life scenario, I was talking to this guy, and it just so happened that he was talking to two other girls at the same time, and it turns out that I actually know them and they were my friends, so I was like, ‘Really, dude?!'” After they discovered this, Sammi begin writing the song, “…that song was kinda like, the ‘You’ve been caught song.’ So that’s kinda where that came about and I brought it into the studio along with two other writers, Melanie Fontana and Koko La Roo, and I told them the idea and I had already started writing it and they just kinda got on board and we put all of our ideas together and they really helped me bring the song to life.”

The song focuses on the girls banding together to call out the guy for his behavior as opposed to the typical narrative of girls tearing each other down and letting the guy get off free, which was intentional. “Yeah and I always tell people too, like it made us stronger in the end,” She exclaimed responding to me praising her decision to go that route. “Like, I’m actually closer with them now,  and I don’t think a guy should ever come in-between a friendship so it’s just kinda a song to show the positive.” The guy might feel embarrassed after this amazing song drops (as he should, honestly), but it really can only go up for Sammi and her friends, “Like something negative did happen, but we’re sassy girls and you’ve been caught and you suck.”

I couldn’t help but ask her if there was a music video in the works for the song, in which Sammi responded, “Yeah, actually, we started shooting it already. We’re kind of in the middle of that. I think we have like one more shoot day coming up very soon. “And who knows,” She teased, “we may have a lyrics video, maybe, a little sneak peek.” 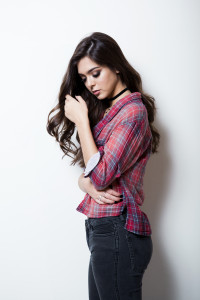 Sammi and her team are currently hard at work with putting together her next EP that doesn’t have a set date, but she says they hope that it’s soon. “I’m always taking inspiration from music that I find, not necessarily any certain album, but I’m always seeking inspiration from everything,” she answered when asked about if there was any songs or albums that she took inspiration from. “One album that I’m obsessed with right now is Drakes new album, I’ve been listening to it nonstop.”

Not only is she feeling Drake’s Views From the 6, her dream project, aside from putting out a full album, is to collaborate on a song with Drake, “That is one of my, like, goals.” She also mentioned Beyoncé’s latest visual album, Lemonade, as another album she was obsessed with. Similar to Beyoncé taking from her cultural roots to develop the sound and aesthetic for her album, Sammi is as well. “There’s definitely a Latin vibe,” She described about what we can expect with her new music. “What I can tell you is that it’ll make you wanna move. It’ll make you feel, as well.”

“I think being Latin American, it definitely let’s me do a lot more,” Sammi responded about how she hopes that embracing her culture will help other embrace theirs.  “I speak both languages, you know, Spanish and English, I can sing in both languages, and I just think more people should embrace it. It’s a good thing, it’s not a bad thing, whatsoever, it’ll only help you. I can speak to more people than the average, just American speaker could, you know? I can speak to people who speak both Spanish and English so I just think it’s a positive thing.” 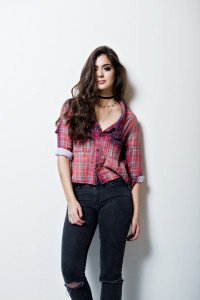 Being bilingual, she chooses to incorporate both in her music, “I don’t have a preference really. I love both languages, you know, Spanish is a very beautiful, love language and it sounds, just beautiful. You can say anything and it’s like, ‘Ah! That’s pretty!'” She laughs. “And then English is just like the main language, I guess, so it’s just like, I don’t mind. I think both languages are exciting and especially going back and forth and singing Spanglish, that’s really cool.”

However, there are little differences in singing in both languages, “I feel like Spanish has more passion behind it, I guess, and I think it’s because it is a love language. But, I definitely feel like in Spanish, there’s no shortcuts, I guess, to writing. In English, you can say, ‘Cus,’ you can make little shortcuts like that and in Spanish, I think it’s harder to do that in writing.”

So what other languages would she like to learn? The answer: so many. “I definitely think Portugees would be really cool. I wanna learn Japanese, I think that would be sick. There’s so many, I dunno…French would be good too, one of my good friends is from France so I would love to speak French.” She admitted that while she can’t speak French, currently, she knows some songs, “I know like a few songs in French, I don’t know if my pronunciation is good, but I just kind of like listen to it and copy what they’re saying. So I mean, I can pretend, I can fake it.”

“I love how passionate [Sammurais] are,” she gushed about her fandom. “They’re always tweeting me, and they’re so excited, especially about ‘Girls Talk.’ They’re just so passionate and one thing I absolutely love is when I visit South America and stay at the hotels and they, like, come follow me everywhere, I love that. And I feel like, I dunno, I just feel really close to them, I just really love how supportive and passionate they are.” 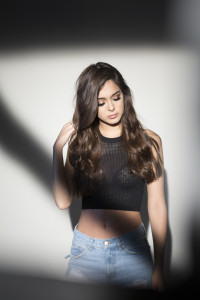 Speaking of South America, Sammi and her team are working on getting her to visit again in the future, “Yes, actually, we’ve been planning that. We don’t have any set dates yet, but I’m super excited, I wanna get back to Chile especially and Mexico and the Dominican Republic and kinda visit those places. So, it’s in the works.”

“Last time I was there, I was in Santiago, it was awhile ago, but I literally love everybody out there. Everybody’s just so passionate and supportive and I think that’s literally my favorite thing,” She responded about what she loved most about South America. “Someone brought me a puppy which was insane and that’s one memory I’ll literally have forever it was amazing.”

“So we’re definitely working on an EP right now,” Sammi answered about what her upcoming projects were. “We don’t have a set date, but we’re hoping soon. As well as working on some possible tours this fall and that’s pretty much the main focus right now and getting this single out and getting it to people’s ears.”

Stay tuned for a link to hear snippets from our interview with Sammi! Including her discussing what artists she would want to listen to her work and us gushing over Lemonade!

Sammi’s new single ‘Girls Talk’ drops This Friday, May 6th and will be available on iTunes.

All About Jordan Fisher at Arthur Ashe Kids’ Day 2016