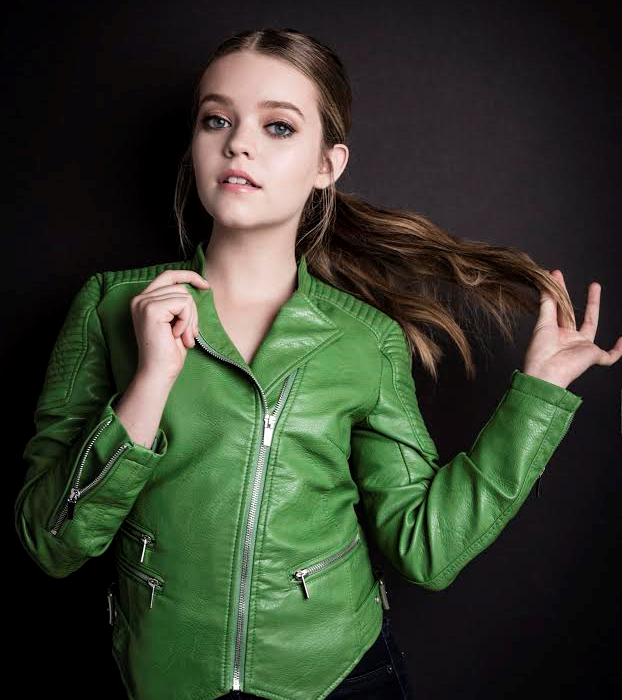 Season two of Nickelodeon’s hit show “School of Rock” recently premiered and it has already proved to be interesting. While the movie that the series (and Broadway show) is based off of ends after the Battle of the Bands, the show is able to explore past that in the second season.

For star Jade Pettyjohn, it means getting to find out more about her character Summer, the dynamics of all the students and Dewey, as well as getting to spend more time behind-the-scenes with some of her favorite people.

“I think for season two, we get to play with more character arcs,” says Jade of the second season. “The writers [have] more freedom to get passed the initial, ‘Hey, here’s the basics of our show!’ and into the layers and relationships themselves. So in this second season the comedy is hysterical, but there is also a deeper level to all of the relationships.”

Already in season two, audiences have watched as Dewey [Tony Cavalero] became the kids’ official teacher, locker drama, and love confessions for the wrong person. In addition to the hypnosis that fans saw in ‘I Put a Spell on You’, according to Jade, this season will contain school dances and lunar eclipse moments combined with explosions, relationships growing, and human hamster balls. “It will make sense later,” she promises.

“Summer grows a lot this season,” the young actress says of her character. “I think that this season, she takes more risks. She gets the guts to go out and do something brave and not be afraid to make a fool of herself. I think because of this, she grows wiser. Like with anything, with experience comes growth.”

In fact, Jade says that her character will find herself having to deal with a little more romance this season. In ‘Brilliant Disguise’, fans saw Summer finally pluck up the courage to confess her feelings to Freddy… only to find him dancing with someone else and the person she confessed her feelings to was actually the custodian.

“The way the writers wrote the romance in this show is so real and something I feel like a lot of pre-teens/teens experience,” she says of the uncertainty and drama that accompanies feelings sometimes. “It adds an interesting element to the show.”

While Jade teased that there would be a little more light on the subject in ‘Brilliant Disguise’, she remains silent on any spoilers, telling Teenplicity to watch to find out!

One of the strong friendships on the show is that between Summer and Tomika [Breanna Yde]. Though they do have their ups and downs, they have each other’s backs and find their way to each other. “I’m actually really happy to say that in this new season, the relationships with everyone is explored at least a little bit. Tomika and Summer of course, but also will Lawrence and Zack as well,” reveals Jade.

The show gets the chance to explore these things as it is given multiple episodes and seasons to further develop the relationships and characters. The Broadway musical of the same name is only limited in that it covers the same timeline as the movie and does not go further. However, each interpretation of the original Nickelodeon film has been great.

“I still haven’t seen it yet!” Jade exclaims when Teenplicity asks if she had seen the Broadway show since her last interview. “I need to go to New York ASAP! I did however watch it online and it was AMAZING!” she can’t help but enthuse. “I still need to see it live though.”

The season one finale of the series took place at the Battle of the Bands, basically the same timeline as the musical and movie. When asked how the season two finale will match-up to the first season’s, Jade says, “I really enjoyed shooting both finales! They are a bit hard to compare because the band takes on a completely different adventure. All I can say is they are both something I am proud of and I guess you guys will have to be the judges from there!”

There’s no need to rush though, as fans will have plenty to enjoy on the journey of season two.

“I’m excited for everyone to see the new music, the growth of Summer, and other adventures the band go through that I refuse to give any spoilers on!” Jade teases. And will there be more celebrity guest stars? “Yes!” she exclaims. “Brec Bassinger is our series guest star this season which has been great! We also have Daya,” says the talented actress, pointing out that she appeared on ‘I Put a Spell on You’. “There are a few more, but I’m not sure if I’m allowed to reveal them just yet.”

For those who want to see everything that Jade is a part of, she has plenty coming up!

“I am currently shooting a guest star role on the new CBS show ‘Pure Genius’!” she says. “That will air sometime in December. I also have a Nickelodeon film called Rufus 2 that will be coming out!”

“School of Rock” airs new episodes every Saturday at 8:30PM on Nickelodeon!

Disney Plus’ latest series Diary of a Future President follows Elena Cañero-Reed (Tess Romero) during two periods of her life. First, we meet her…