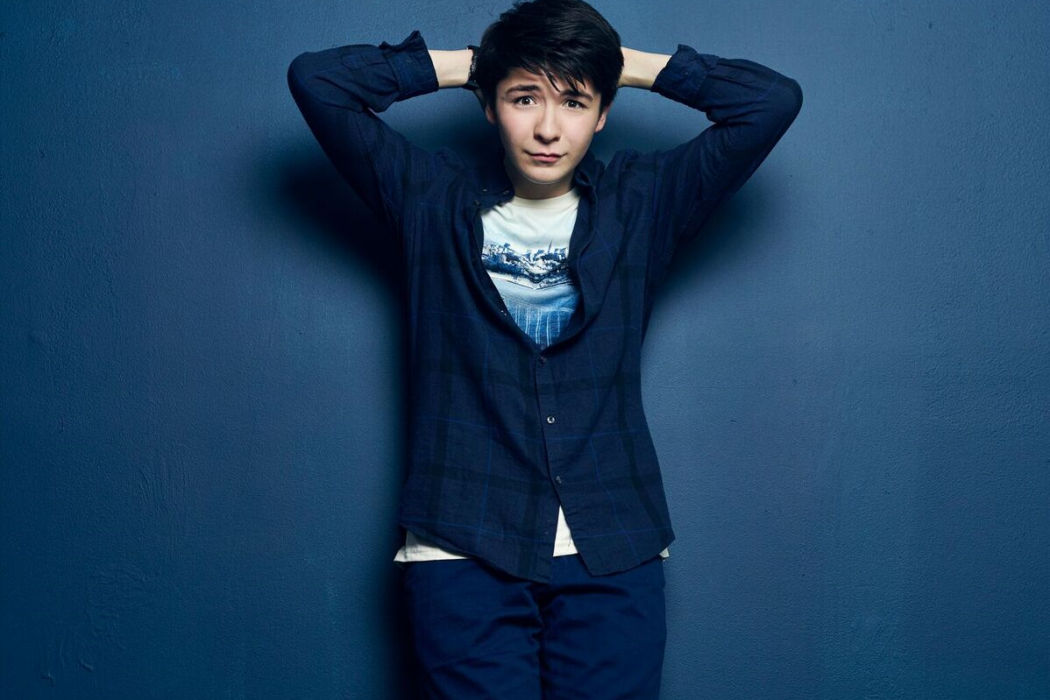 For this entire week, Teenplicity will be posting exclusive interviews with the cast of Amazon’s Gortimer Gibbon’s Life on Normal Street as a celebration of the series, as the final episodes go up on Amazon today, July 15th. Each cast member provided exclusive stories and heartfelt commentary about their time on Normal Street.

Check out what Sloane Morgan Siegel has to say below!

At the beginning of every adventure on Normal Street, Sloane Morgan Siegel narrates that there’s a lake on one end of the street and a forest of trees at the other – and everything that happens between them on Normal Street is anything but normal.

The adventures that the group of friends go on throughout the series highlight and are reminiscent of childhood and growing up. There are no limits to the imaginations on Normal Street.

Growing up on Normal Street has offered a great environment for the kids to thrive and grow, and title character Gortimer Gibbon, portrayed by Sloane, does not want to leave.

“Well, you may not expect it, but even though Gortimer is a lover, not a fighter, he does engage in his fair share of swordplay, arguments, and even physical combat,” Sloane says of what’s to come for his character. “Since it has been revealed that Gortimer has to move, those series of events cover five episodes with their craziest adventures yet. So, you can expect drama, some great laughs, and some wild adventures.”

Some of the drama that Sloane was referring to could perhaps be about the constant will they/won’t they relationship status of Gortimer and Abigail [Coco Grayson]. Fans were left with the news that Gortimer lied in a letter to Abigail and told her that he had a girlfriend. 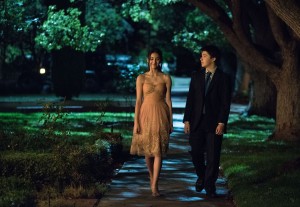 Sloane says of the relationship, “There is most certainly a chance for them to still make up, after all, there are 13 episodes left for them to mend their relationship.” The actor says that their relationship builds to the brim with tension. “They will go through a course of events that will make them or break them for good. As far as the letter goes, it does suppress Abigail and Gortimer’s feelings for each other, but young love might still triumph in the end.”

For those rooting for the relationship, sneak peeks of the episode “Gortimer vs. the Abnormal Formal” show a bit of a positive ending for the time being.

One of Sloane’s great talents that has been shown time and time again on the show is the vulnerability he is able to bring to Gortimer. It adds a level of depth to the character and a unique realness to him that is absent in so many other programs aimed towards children and young adults.

“Gortimer has grown in every way, he’s learned how to cope with his feelings, how to comfort friends and family in hard times, and even grown up literally,” says Sloane. “With every episode Gortimer becomes more and more real, his soul deepens and his experiences change him. I do relate in many ways because experiences in my life and in his, have helped me to grow as a person as well.” He goes on to joke, “We might even be the same height now.”

Gortimer wears his heart on his sleeve on nearly all occasions. Audiences watched in the season one finale as Gortimer is brought to tears, angry at his best friends that they won’t continue their never-ending rainbow which kept his dad happy and present in his life. Prior to that, he expressed his misunderstanding on how to handle his new friendship with Abigail.

In the second season, Gortimer and his friends are hit hard by the tragic passing of Mel’s mother. Sloane mentions how the series of events that follow her passing changes every character on Gortimer Gibbon’s Life on Normal Street, giving them each a burden. 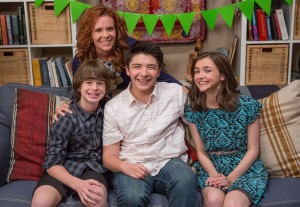 “Gortimer, however is affected in a few different ways,” Sloane explains. “Having a friend who’s had such an impactful loss in their life, does impact your life as well. How you act around them, what you say, how you help them cope with it. All these things affect him personally. Then, there’s that loss in his own heart of losing someone he’s known all his life, but the most sensitive one is everyone else around him. The tone of his everyday life has changed somewhat due to his family and friends all carrying this burden together, but it does help him to grow closer to Mel [Ashley Boettcher], Ranger [Drew Justice], his mom [Robyn Lively], and even Mel’s dad [Bart Johnson].”

These hardships of life have only made the friendship between Gortimer, Mel, and Ranger stronger.

In a previous interview with Teenplicity, Sloane commented that their friendship was one of his favorite parts of the series. Throughout the show, viewers have watched their bond mature with the characters. “I do believe their friendship is the core of the show,” he says. “And putting tension on their friendship is like putting the show’s life [in danger]. The fact that Gortimer is going to move puts a tremendous amount of stress on that friendship. It worries them how it’s going to all turn out,” Sloane confesses about how the season tests their bond, but continues on to echo Ashley and Drew that the trio stay strong none the less.

On a more personal level, Sloane dishes that the knowledge of moving away really turns Gortimer’s life upside down.

“Think about losing everything you’ve ever known – your history, your friends, and your home. You have to leave it all behind in the blink of an eye. It would tear you apart inside. That’s what it does to Gortimer towards the end of the season. He’s trying to hold his life together with all his might but that is no match for the one thing that always wins in the end… change.”

Sloane believes that his character will return to Normal Street eventually, saying, “After all, who wouldn’t want to go back?”

“[Normal Street is] his home, it’s where his friends are, and it’s where he grew up. He’s certainly had some adventures to write about and he might just do that.”

To write about his time on Normal Street is something that Sloane easily sees in Gortimer’s future. He mentioned how in “Jacks of All Trades”, Gortimer is struggling with the idea of what to do. “He wants to find something he loves and he does find a love in fencing. Though post-Normal Street, he does engage in storytelling, kind of like the narration in the show.”

Having played this character for years and finding so much of himself in Gortimer, Sloane will most definitely miss being him.

“I miss living in his fantastical world with him. Walking on our amazing sets every day and living his life. The places we would go and the people we would meet, it was like a second life for me and I miss it dearly. I miss him and I miss everything around him, from the onset world to the offset one. Everyone was a family on the show.”

As he reflects on his time on Normal Street, the young actor remembers the adventures the characters have gone on. From wishing well frogs to rainbows, magic watches to meteor showers, it’s hard to pick just one as a favorite. However, there is an adventure that sticks out to Sloane the most.

“My favorite adventure is most certainly a costume party the trio will embark on in the new episodes,” he says. “It’s full of mystery, wonder, and twists that had me on my toes the whole episode. I’m sure the audience will love it as well. If you had to describe our show with one episode, this would probably be it.”

However, the very first adventure is close to his heart and one that Sloane would willingly go on in real life.

“If I could go on one adventure in real life, it would have to be the Frog of Ultimate Doom, because who doesn’t love fighting magical frogs who grant wishes in the rain and saving blind old ladies with your two best friends?”

When speaking with the cast, there were three questions that every cast member was asked. Here are Sloane’s answers to those questions.

Teenplicity: Last time you said that your learned how alike you and Gortimer are. Have you learned anything else from your time on the show?

“I’ve learned so much from the cast and crew on Gortimer, I can’t fit it all on one page. But I learned comradery and respect, I’ve learned how every job on set functions, I’ve learned so many new techniques for acting, and the list goes on. The most important thing I learned though is how to lead a team and build a family from strangers.”

“…I would get a job at Egg’s market and then convince Gortimer I’m his long lost twin brother from Utah and join the trio on adventures.”

Teenplicity: One continuous praise the show received was how well it captures childhood and growing up. Having grown up alongside your character, what will you miss most about ‘Normal Street’?

“Well, the thing I miss the most is the street itself, the adventures I have on it, and all the people involved. This show holds a spot very close to my heart and I love it dearly. I hope generations continue to enjoy our hard work and continue to talk about Gortimer, Mel, and Ranger for years to come – I know I will.”

The final episodes of Gortimer Gibbon’s Life on Normal Street are on Amazon now.

To keep up with all things that Sloane Morgan Siegel is doing, be sure to follow his Twitter!

*Above photo credit to Benjo Arwas

Everyone Scream for Brianne Tju

(Collaboration with Brie Garrett) MTV is known for having a big impact on pop culture. From TRL (Total Request Live) to Jersey Shore, the network…