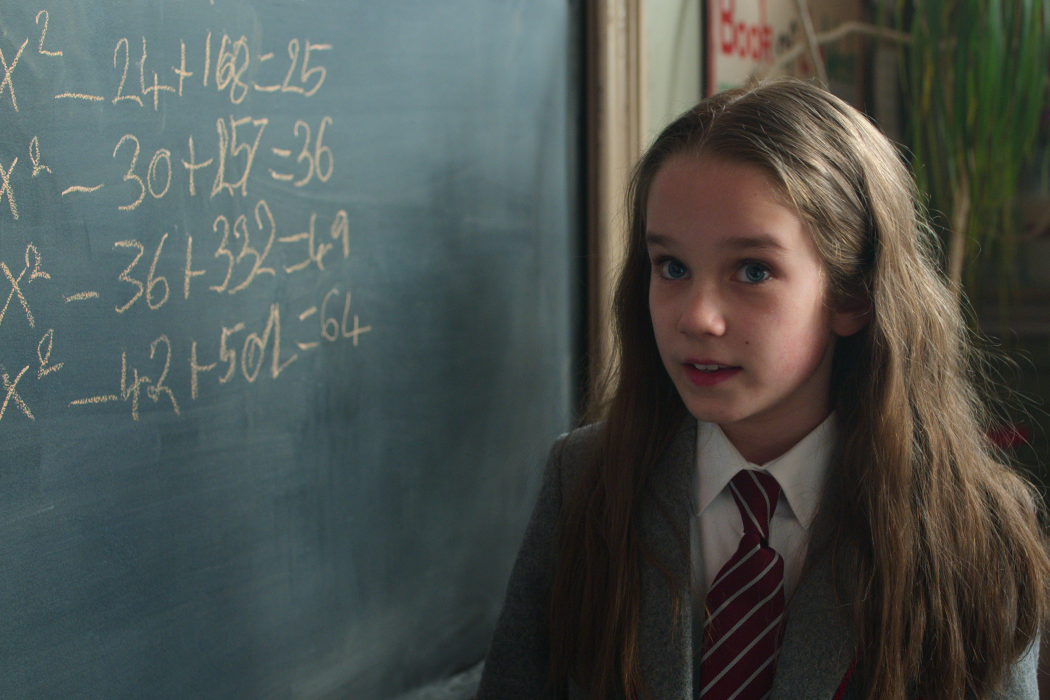 When Netflix looks to invest in a film adaptation of the stage musical of Matilda, it comes with a heavy weight on the shoulders of whoever takes on the mantle of the beloved titular character. Not only will that young actress be the driving force of the film, the necessary element to sell the entire story, but they will also be compared to those who came before her, like Mara Wilson in the 1996 film and the number of award-winning actresses that portrayed Matilda on stage around the world.

It is something that Irish actress Alisha Weir, Matilda in Netflix’s Roald Dahl’s Matilda the Musical, hasn’t concerned herself with from the start.

She had been familiar with the book from reading it in school and she’d seen the movie, but, the actress says, she hadn’t seen the stage version prior to filming. “After we filmed the movie, me and some of the kids went to see [the stage musical]. I really enjoyed it!” She continues, “I know that so many people have played Matilda, whether that’s on-screen or on stage, so I knew that when I was taking on the role, everyone [prior] has done it so amazingly. The first movie is so iconic and all the kids that played on the stage are so talented, but because we’re completely different people, even if I tried to portray it like how someone else had, it would be completely different and [I’d have] transformed into Matilda in a completely different way.”

A smile accompanies the joy in her voice as she adds, “I really loved when I went to see [Matilda the Musical] on the stage. I love seeing all our characters portrayed in a different way, and [the] same when I watch the movie as well.”

Alisha keeps a level head about herself when the overwhelming praise for her turn as Matilda is brought up.

“When I heard that I got the role, I just tried to put myself in Matilda’s shoes and just completely leave myself behind,” she says. “When they’d say action, I just tried to go into the emotions that I feel that Matilda would go through.” She shrugs one shoulder and smiles as she continues, “Then all I could do is my best and just hoped everyone liked it. Everyone was really kind to me, and all the amazing actors that I worked with really helped me as well because it was my first ever big film. To be working with amazing actors was amazing.”

Labeled as a breakthrough performer by those who have viewed Roald Dahl’s Matilda the Musical, of which TEENPLICITY can be included, Alisha holds her own in scenes with acting heavyweights like Emma Thompson and Lashana Lynch. Praise has been showered upon her by critics, audiences, and even her castmates.

Only in recent weeks had it really started to sink in for the actress. “I think I go into two completely different worlds when I do this kind of stuff,” she shares. “When I’m back home in school with my friends, I’m just Alisha. Then when I do this kind of stuff, I go into the zone and I really enjoy it.” However, she’s quick to share the acclaim with everyone who worked with her on the film. “I’m so happy for everyone because I know that everyone works so hard – all the cast, the crew, the kids. I’m just really, really happy for everyone.”

Working alongside talented actresses like Emma and Lashana was amazing, according to Alisha. “They just really taught me a lot and they couldn’t have made me feel any more welcome. There were so many things I didn’t know about and they were just really kind to me. On and off set, they were so nice.” She recalls her favorite memory with Lashana being when they were able to sing ‘Still Holding My Hand,’ the last song of the film. With Emma, she laughs as she says it was like working with two completely different people. “When I had first seen her in her costume, I was a bit scared,” she starts with a laugh. She then holds out her arms as if waiting for a hug and explains that once Emma did that, “All the kids ran in to give her a big hug.” She adds, “Every single person was just so kind.”

The Netflix adaptation does an incredible job of exploring Matilda and her world through music, with the movie using color as an additional character, embracing the unlimited abilities of the production in featuring its musical numbers, and making its mark on the story’s legacy.

“It, obviously, captures the first film and also [adds] some different bits along that are new,” Alisha says when asked what makes Netflix’s adaptation different from previous ones.

She says of the film, “I feel like when you watch the movie, it’s a really heartwarming film. If you watch it on your own, [with] your family, if you’re a kid, if you’re an adult, I think we can all look up to Matilda in a way and take advice [from] her and be strong. No matter what age you are, I think we can just stand up for ourselves and not let anyone walk all over us, and just have lots of courage like Matilda.”

Building off of that, Alisha continues as she discusses the kind of impact she hopes the film has on audiences. “Matilda is put into a life where she has no one to go to, and I think many people can relate to that in one way or another. Looking up to Matilda, she [meets] a lot of different characters during the film, and some are good and some are bad. That’s the same in life when you meet people – some you get along with and some you might not. So I think you can really just take tips off Matilda and try to be like her and stand up for what’s right.”

For Alisha, the film impacted her in a number of ways. The one she recalls most is the fact that, since it was her first big film, she looked to her castmates to learn from them. “Because I was working with incredible actors, I really learned off of them and I was trying to be like them because they’d a lot more experience than I had,” she recalls. “There were lots of roles that I didn’t know about. It was a little bit scary when I first went in because there were a lot of people staring at me, but I learned to know that they’re not staring at me, they’re doing their job as well as I am. There were a lot of things that I learned. Also,” she continues of its impact, “meeting everyone and making loads of new friends as well.”

Alisha says that because of all the new friends she’s made from Roald Dahl’s Matilda the Musical, whenever she flies from Ireland where she’s from over to London, England, she’s able to see her friends. “We always keep in touch and meet up. Just all the kids were absolutely incredible. Matilda doesn’t really do the dancing but she’s always in the dance scenes, overlooking the whole thing. So to get to watch all the kids just doing their thing was amazing and they’re really, really talented. I’m just really, really happy for everyone.” 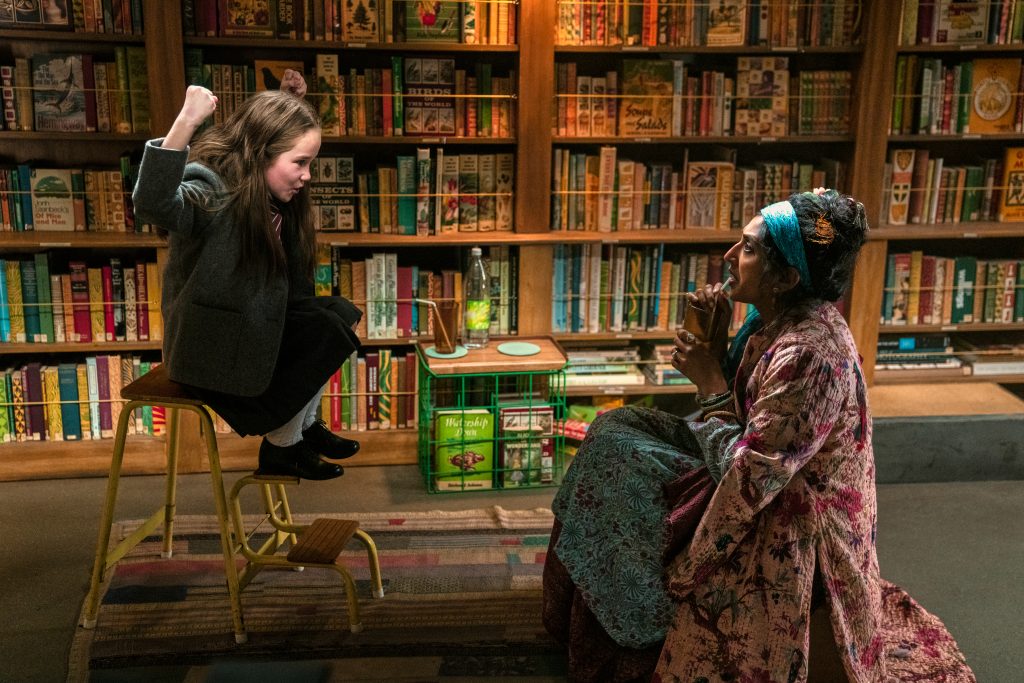 Although her character doesn’t dance much throughout the film, she was able to explore and do a few tricks during the song ‘Naughty’. “I really enjoyed ‘Naughty’ because although Matilda doesn’t really do the dancing, that’s her main bit and she does the Matilda pose up there. She walks on her hands and I really enjoyed that one.” However, if Alisha had to pick a favorite musical number, she would decide on ‘Quiet’.

“My overall favorite is definitely ‘Quiet’ because I think, although I had so much fun filming it and going up in the hot air balloon, I just really love when I get to watch it because I think for everyone, when you’re watching that bit, Matilda expresses everything that’s going on in her head that people didn’t know about until that song where she just tries to let it all out. I think when you’re watching that, you can really feel what she’s going through and go through the emotions with her.”

The handstand she previously mentioned, however, was the most difficult sequence for the young actress to film but also her favorite. “It was hard because I had to sing while I was up there and I had to make sure I wasn’t going too fast and then go with the time of the song as well. That was probably the most difficult but it was probably one of my favorites to film,” she confesses with a laugh.

Alisha is enjoying the moment for what it is. When asked what she hopes to take from this film and bring with her as she continues in her career, she laughs and shrugs off future anticipation. “I don’t know what’s going to happen next,” she says with a smile. “I don’t think anyone knows, but I’m just kind of going with the flow and seeing what comes up. I really enjoy doing acting and for my first ever big film, it was just incredible. I like being on stage as well. I don’t know what’s going to happen next, but I really enjoy doing this stuff so I definitely want to do more.”

With the holiday season upon us, TEENPLICITY asked Alisha Weir a few holiday-themed questions to get in the spirit! Check out what she has to say below!

Alisha: Hmm. I really like when you get to make gingerbread houses and when you get little snowman cookies. I love cookies and milk because that reminds me of Christmas.

TEENPLICITY: Do you prefer a cold holiday season or a warm one?

TEENPLICITY: Who in the Roald Dahl’s Matilda the Musical cast would spill who they had for Secret Santa first?

Alisha: We do this in my school a lot, so probably I would — , I’m not very good at keeping secrets, so it would probably be me that would spill it first. [laughs]

You can watch Netflix’s Roald Dahl’s Matilda the Musical in select theaters now and on Netflix December 25th!

* Interview has been edited for clarity and length. 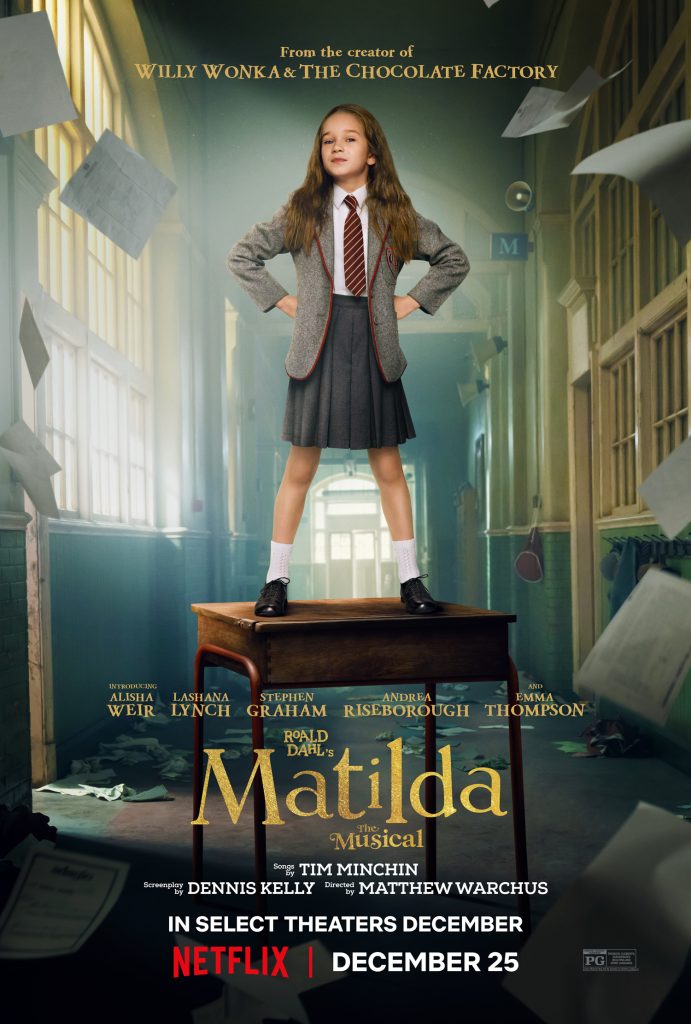 Kerri Medders Talks Who She Is

Seventeen-year-old Kerri Medders is quickly carving her own path within the music industry. Stepping into her sophomore era with her second EP, Lot 17, coming…