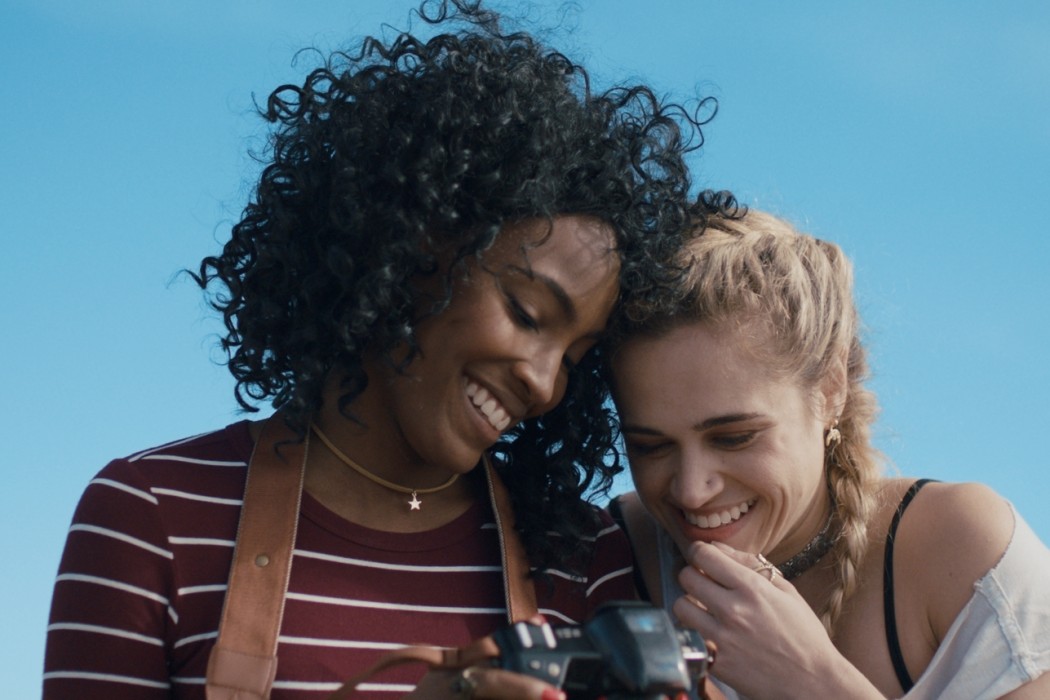 We all know the movie trope: a group of young adults going on a trip together to a place far from civilization and then almost everyone dies because they all decide to make very bad choices in the name of having fun instead of surviving. The final person who survives ends up surviving for the most part, because of luck.

The person (sometimes it’s a thing) doing the terrorizing tends to have some kind of goal. Sometimes, it’s some kind of revenge. Other times, the group was just at the wrong place at the wrong time–in a case like this, they’re most likely unknowingly intruding on the person/things place. (Or they’re very knowingly intruding on the person/things place and then are confused about why what’s happening to them is happening to them.)

In terms of the new thriller/mystery/monster movie Head Count, the person/thing, a shape-shifting creature known as the Hisji, is accidentally brought into play. What exactly its intentions for the goal it’s trying to achieve isn’t necessarily flat out explained, in a lot of ways, it feels up to the viewer to make that decision based on their own perceptions of what it wants, but maybe that makes it creepier given the smart, yet lonely creatures draw towards human fear and empathy.

When I talk on the phone with Ashleigh Morghan who plays Zoe, it’s a Monday afternoon for me and a Monday morning for her. I’m her first interview of the day and she greets with a warm and soft hello. We talk about her entrance into the world of horror with Head Count, feeling a connection to her character, and the role of loneliness and observation intertwined in this story.

The interest in being a part of Head Count for Ashleigh came from wanting the new experience considering she had never done a horror movie before this project. “I was kinda intrigued to see how that worked and then once I read the sides and the script, I just felt really drawn to the character of Zoe. I feel like we just had a lot in common,” Ashleigh reflects.

When we first meet Zoe, she’s hanging out with her group of friends in Joshua Tree as a routine vacation/party trip. While the group goofs off and basks in the sun, Zoe is taking in the atmosphere through photographs until Evan (Isaac W. Jay) catches her eye.

Zoe’s love and interest in photography define her worldview. Asking Ashleigh about it, she relates it to her own experience loving photography although she gives the disclaimer that she doesn’t consider herself to be a professional. “Not to sound super cheese even though I’m super cheesy, but you see the world through a different lens. You take a second to look at things. Especially in these days, we’re so caught up in our phones. But when you’re a photographer, you kinda just look at things a little bit longer. You linger on things, your mind wanders a little bit more.”

Ashleigh explains that Zoe takes her time, “not trying to quickly get through everything” instead, taking everything in. “[She] looks out and takes a picture, look out and take pictures of the earth so she has more calmness and more patience because she’s actually trying to capture something beautiful.”

When you’re a photographer, you kinda just look at things a little bit longer. You linger on things, your mind wanders a little bit more.

“Then as she gets to know him, she realizes that he’s really comfortable and nice and she thought he was really cool,” she discusses further. “I think she just found someone who she could be comfortable with, someone that wouldn’t judge her. Zoe likes to be with people who are interesting and challenging and I think Evan’s definitely that.”

The calm, patient, and kind, yet assertive when need be energy that Zoe (and Ashleigh) gives off is perhaps why the Hisji clings to her the most out of the group. As a result, Ashleigh ends up getting to play double roles as both Zoe and the monster longer than the rest of the cast and in a more in-depth, yet subtle way. When I ask her about how she took on that acting challenge and the layers required to make it work, she explains that in order to play the monster, she focused in on the human element it held.

“I wanted to kind of keep it grounded and real. It’s sorta like The Thing,” she references the 1982 sci-fi monster movie. “If it’s too obvious, it’s gonna stand out and then people are gonna know something is up. So, I made sure I kept her grounded and real so that none of the friends knew what was happening.” Preparing for that responsibility, Ashleigh studied others and let that play into how the Hisji existed. “I was kinda observing other people like how they move and how they act when they’re saying things, when they’re telling stories, when they’re sitting still, and when they’re listening. So, as the Hisji, you just spend a lot of time just listening and watching and observing. So, it’s kind of something I brought to the monster, just kind of a lot of stillness, a lot of observation.”

Differentiating between playing the two, Ashleigh says, “Zoe’s shy, but she’s not afraid to speak her mind either. Like, if something’s up, she’ll let you know. But the monster is kind of just more lax and chill waiting for something to happen.”

Interestingly enough, in an ensemble movie about a group of friends on a trip together, loneliness and the insecurity that comes with the fear of being lonely is relevant and recurring. “I think initially, the person with [the monster] the longest is the one who came alone. Zoe was by herself–by herself romantically–but she’s okay being by herself. Maybe she’s a little lonely, but not in a way where it’ll be about her and she’ll make a scene about it,” Ashleigh says as we discuss why the monster takes an interest in Zoe. “I think it kind of related to her like, ‘Oh, I see all these people together, this girl’s not with anyone but Evan.’ Which is kind of why she’s attracted to following Evan and Zoe a lot. So, I think it’s just a feeling of wanting to belong.”

It’s Evan and Zoe’s experiences and feelings about their placement within the friend group that the monster tries/wants to understand. “Evan wants to belong to the group. Zoe kinda wants to belong to her friends even though she’s the single one. And then she kinda just wants to belong somewhere,” Ashleigh says.

A fan of monster movies, Ashleigh went into the project knowing she was going to become something but not necessarily the actual monster. (Sidenote: while she likes monster movies a la A Quiet Place, Ashleigh admits that similar to her co-star Isaac, horror movies–think Annabelle–actually creep her out too much. When I tell her Isaac said the same thing, she jokes that the two of them would be on set questioning what they were doing in the situation.) She explains that the director Elle Callaghan was very protective over the monster (Ashleigh lovingly calls it her baby) requiring her to pry in order to get a better understanding of the monster. “She’ll talk about it and it was like a whole story, it was really cool,” Ashleigh explains hinting that Elle may have an interest in delving in further with future projects.

“It’s really, really exciting with the folklore. But, I feel like Zoe’s progression, she kinda starts off the odd one out? But then kind of,” she stops thinking for a split second and then continuing, “it’s hard to say because she turns into like this–I don’t know how her story would have ended,” she admits. “But, she ends up I guess being the odd one out but still managing to shine. That’s one of the good things about her throughout it.”

[Zoe] ends up I guess being the odd one out but still managing to shine. That’s one of the good things about her throughout it.

Asking Ashleigh who would have survived the longest in real life, she quips, “I thought that Zoe would’ve lasted a lot longer, but apparently she didn’t.” That said, she gives a shoutout to the crew at the house when everything starts to go down towards the end, Camille (Bevin Bru) and Evan would be the ones to make it out. Referring to the movie Ashleigh says, “I’m surprised they came back. I feel like if they would’ve just stayed at Joshua Tree, they would’ve survived but because of Evan, they come back to the house.”

When I talked with Isaac a few days before, I asked him what question(s) he’d want me to ask Ashleigh when we talked. He decided on me asking her what her favorite and least favorite parts about working with him were. “Oh my goodness,” she laughs when I tell her the question. “Okay, it’s not my least favorite, but as you can tell, I’m very like, ‘BlahBlahBlahBlahBlah’–like I could talk for hours. And I think he’s more introverted, so there’d be times where I’m like, ‘Isaac! BlahBlahBlahBlah!!!’ and he would just be like, ‘Mm??'” She makes the noise in a quieter tone. “He, like, processes things and he needs his, like, quiet time and I’m kinda like the total opposite so I’ll be like, ‘Talk to me, Isaac,'” she exclaims for effect.

“And then my favorite part was,” she thinks for a short moment. “I said this recently, I was like ‘Oh, that was so fun.’ But, prior to the film, we didn’t know each other. So, we got to know each other as people and as characters at the same time in real life and I thought that was super cool.” Before we say our goodbyes and end the interview, she excitedly requests wanting to get him on record saying what his favorite and least favorite parts about working with her were.

Aside from Head Count, Ashleigh stars in another fear-driven narrative: Native Son. Starring alongside Kiki Layne and Ashton Sanders in the role of Jasmine. The projects are vastly different, but both fall within the same realm of what happens when your fear and insecurities ultimately become and take over you. On a lighter note, she also has a part in the romantic comedy The Last Summer on Netflix. “I’m working on another horror film, but a lot of information hasn’t been released–they’re still casting,” she hints, remarking as an aside, “Look at me staying in the horror realm.”

Remaining busy, she has a few extra projects coming up, including an appearance in the new Veronica Mars, while also getting behind the camera. “I’m writing some of my own stuff. I’ve been inspired to kind of create some projects so yeah, be on the lookout for that,” she finishes.

You can stay up to date on all things Ashleigh Morghan by following her Twitter and Instagram accounts.

Head Count is available to watch on all Digital Platforms you can buy/rent movies.