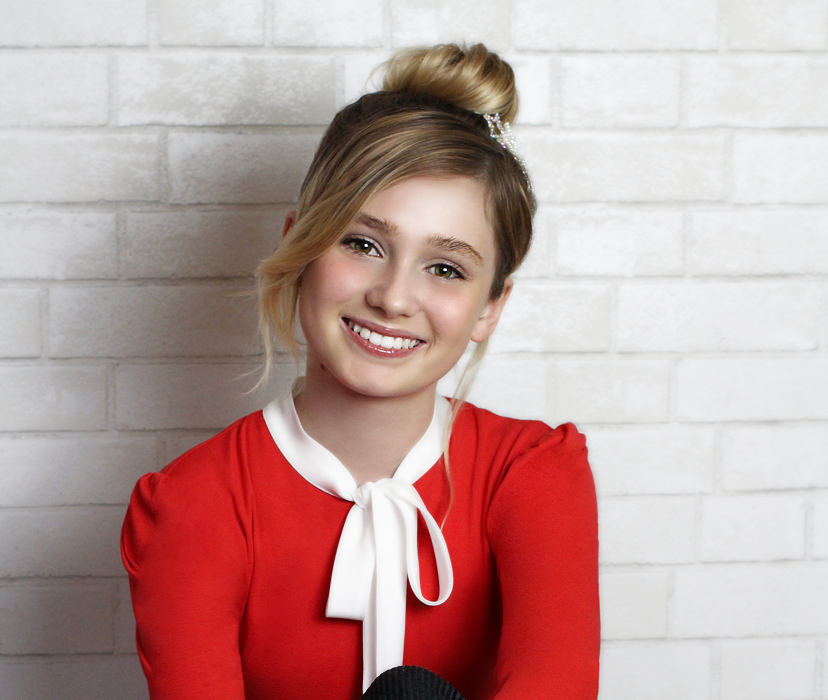 When TEENPLICITY spoke with Audrey Grace Marshall, it was just days after her 12th birthday. Though talking to her, one quickly comes to the conclusion that she is wise beyond her years.

The topic of conversation surrounds her upcoming HBO Max series, The Flight Attendant. The show is based off of The New York Times best-seller of the same name and stars Kaley Cuoco, best known for her role on the hit comedy series The Big Bang Theory, as flight attendant Cassie. Audrey Grace plays Kaley’s younger counterpart as told through flashbacks to her childhood.

“The show is about how an entire life can change in one night,” Audrey Grace says of the series. “Cassie is a flight attendant who wakes up in the wrong hotel next to a dead man, and she has no idea what happened.” Describing the tone of the show, the young actress says, “It’s a dark comedy-thriller.”

The tone of the show is one of the factors that drew her to the role of Young Cassie, “It’s… a crazy different role. It’s really dark, and I like playing parts that feel real,” she says. “Young Cassie has some issues, but, you know, she’s not perfect and I liked that. She has a lot of internal struggle.”

The time in Cassie’s life that Audrey Grace portrays is when the character is just ten years old. “She grows up in a traditional household – in the sense that she has like a mom, dad, brother – but she doesn’t have a normal upbringing,” the actress clarifies. “Her relationships with her family, and her father in particular – they’re close, but they’re definitely dysfunctional.”

I definitely would like to win an Oscar. I’ve got a way to go, but definitely up on the list.

Seeing Cassie at such a young age, and her relationships with her family during that formative time, is important because it will help the audience understand why she is the way she is and why she makes these “crazy certain choices”, according to Audrey Grace. “Without seeing her childhood, it would make it more difficult to empathize what’s going on and empathize with her as an adult,” she continues.

Describing her character during this time, she says of Young Cassie, “She’s agreeable. She’s a go-with-the-flow kind of girl, just accepting certain things instead of trying to change them. She tries really hard to please other people, even if it means she’ll hurt herself in the process.”

This insight into Cassie as a child also allows viewers to see just how much she has changed over time. Audrey Grace says of the growth Cassie has gone through from childhood to adulthood, “She’s lost the optimism that she had as a kid. She’s really disconnected from her feelings and she’s definitely done pleasing other people.”

Cassie is a complex character, full of lightness and darkness within her. Portraying the young counterpart to Kaley Cuoco’s adult Cassie is a joy for the actress in more ways than one.

“I really, really enjoyed working on more serious material. Cassie isn’t a perfect cookie-cutter kid. She has real depth and real problems. The challenge of bringing that to life was a lot of fun,” she says. The fashionista side of the actress also thrived while on the show. “I loved the wardrobe. It was vintage and very similar to my own personal style. I can definitely say I wanted to keep it all.”

However for Audrey Grace, taking on the role of Cassie in The Flight Attendant did more than just add to the growing variety of roles on her resume, which already includes parts in Marvel’s Jessica Jones, Lifetime’s A Very Merry Toy Store, and Netflix’s The Last Summer. This character gave Audrey Grace the chance to understand much more about the world around her.

“I think the most difficult part was realizing there’s real kids out there who grow up like Cassie,” the actress says of the character’s eye-opening home life. “For me, it was just acting – I was playing a character on set. But for lots of kids, Cassie is real life. And that was really sad to think about.”

Portraying those tough scenes is hard enough on its own but luckily Audrey Grace had a great scene partner to work alongside. Jason Jones takes on the role of Cassie’s father in the series, the actress doing most of her scenes with him. “I wish we would have had even more,” she says when asked who she wish she got to spend more screen time with. “He was so funny and he made me feel so comfortable, and we had such a great time together. I hope that we can work together on some more projects someday.”

Until they can collaborate again, audiences can enjoy the way the two play off of each other when The Flight Attendant premieres on HBO Max on Thanksgiving.

“I think I’m just most excited for everyone to see the whole story unfold,” gushes Audrey Grace. “It’s crazy, suspenseful, and exciting! And at times it’s really funny. So I’m just proud to be a part of it.”

Looking back at her time filming the show, the actress is able to appreciate what it meant to portray a kind of role like what Young Cassie was. “Probably how natural it felt to be Young Cassie,” is her answer what asked what has surprised her most as she reflects on the time. “Even though our lives are completely different, I was really able to relate to her as a person and feel her pain. It never felt like I was acting.”

Acting is something that she aspired to since she was younger, though this is not surprising when one watches her command the screen.

Without seeing her childhood, it would make it more difficult to empathize what’s going on and empathize with her as an adult.

“I used to be very, very shy and my parents wanted to help me come out of my shell,” Audrey Grace shares. “So they asked me if I could do anything at all, what would it be? And I was only seven years old and I was obsessed with Disney and the Disney show Liv & Maddie. So I said that I wanted to be on TV.” She says that things snowballed from there, leading her to where she is today. “But I still have that dream of being on a Disney show. It’s definitely a goal of mine,” she shares.

It is one of three goals she hopes to accomplish in the next ten years. “I would love to be involved with a project by Disney. It’s what started the whole dream, so that’s definitely on the bucket list,” she says, referring to the inspiration that Liv & Maddie gave her to be an actress. In addition to that, she says, “I really want to be cast as a lead role in a dramatic feature or a series like this. And lastly, I definitely would like to win an Oscar. I’ve got a way to go, but definitely up on the list.”

Her list of dream co-stars actually contains one Oscar winner and one Oscar nominee.

“Well, my favorite movie is La La Land, so working with Emma Stone or Ryan Gosling would be absolutely incredible,” she gushes. Talking about the movie-musical gives the immediate impression of Audrey Grace’s intelligence and understanding of storytelling. When asked her favorite aspect of the film – which was also nominated for Best Picture at the Oscars in 2017 – she says, “I think the hope. They each had dreams and even though they had to separate, in the end they still got what they wanted. And I thought that was really cool.”

Hope is a reoccurring theme in Audrey Grace’s life. Not only does she constantly hold out hope for her dream roles, but she also embraces and shares the hope for man’s four-legged friends.

The actress proudly supports and shares the message from a New York City-based organization that works to bring awareness to senior dogs up for adoption all across the country, Susie’s Senior Dogs.

“I am obsessed with Susie’s Senior Dogs. I first saw them actually on Instagram, and I’m in New York City and so are they!” Although she’s not currently involved with the organization in a hands-on way, she does still share her love and support for all the hard work they do.

“It’s a nonprofit organization that helps find senior dogs forever homes. And sometimes people are worried about adopting an older dog, but they have so much love to give and they made incredibly loving pets,” she shares. “You can check out their Instagram – it’s SusiesSeniorDogs – and they post their senior dogs that are up for adoption, and there’s a link in their bio to donate!”

With the first episode available to watch for free now, episodes two and three of The Flight Attendant lands on screens tomorrow, Thanksgiving, at 3am EST / 12am PST on HBO Max.

Staying by Trevor’s Side