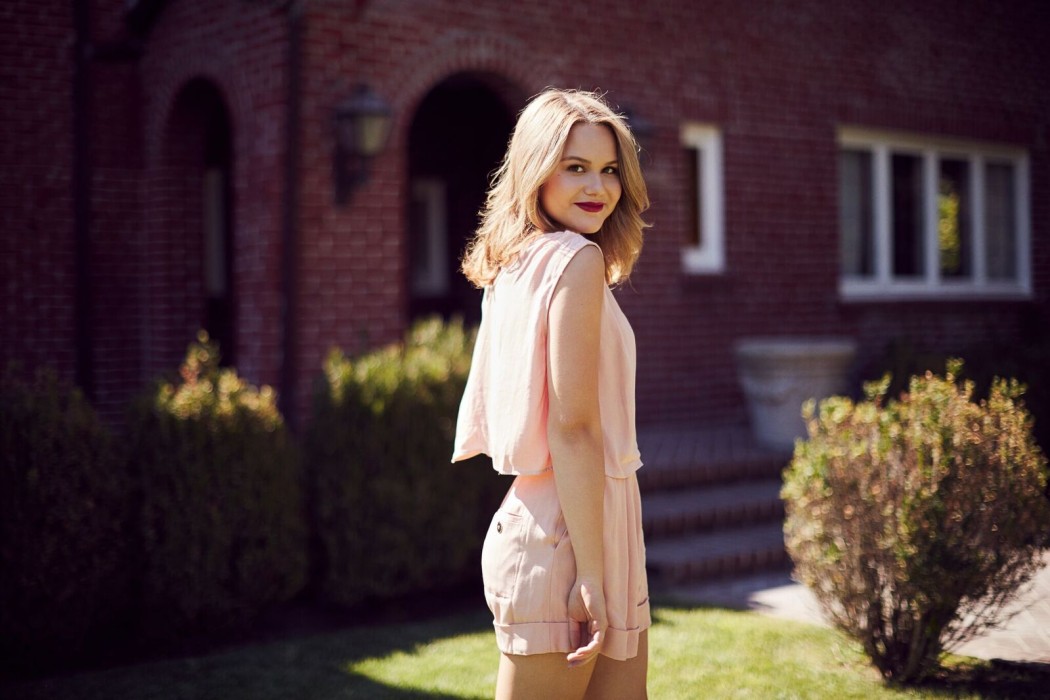 When “The Kicks” debuted as a pilot last year for Amazon, the overwhelming positive response called for a full season order. One year later, season one debuted on Amazon Prime and quickly earned the platform’s full five-star rating.

Based off of the book series by Olympic gold medalist and FIFA Women’s World Cup champion Alex Morgan, the show follows the life of Devin Burke [Sixx Orange] as her family moves across the country and she has to leave everything she knows, and her beloved soccer team, behind.

Isabella Acres plays Mirabelle in the series. She’s the best soccer player on the school team until Devin comes along. This initially creates a rift between the two girls but they are able to overcome it and become friends.

“Mirabelle is the tough girl on the team,” Isabella describes her character as. “She’s adventurous and she’s not afraid to speak her mind. When Mirabelle wants something, she just goes for it. She may seem standoffish, but she really does have a big heart.”

The young actress acknowledges that her character was the best on the team without having to try very hard. “When Devin arrives, Mirabelle doesn’t trust her at first, but then she begins to realize Devin really does care about the Kicks and starts to open up a little more.” This is where Isabella pinpoints their friendship beginning to form.

“The tension between the two of them is one of the things I love about the show,” says Isabella. “Both girls have a very strong point of view and they have to learn how to work together for the sake of the team.”

Throughout the season, the girls of the Kicks soccer team come together in more ways than one. Not only do they work together to become better soccer players and a better team, but they also create a stronger bond as friends. The idea and importance of teamwork isn’t something that Isabella leaves on the field.

She discusses how the series, as well as other sets she’s worked on, has taught her that everyone on a team has a hand in creating success. “No matter how big or small their job may be,” she explains. “For example, every member on a soccer team is vital to a team’s success: from the goalie, to the equipment manager, to the person who drives the players to away games, etc. The same goes into creating a series. The director, writers, wardrobe stylists, lighting team, actors, caterers, you name it – all of them are equally important to the final product. It’s about doing your best not only for yourself, but for everyone else involved as well. There’s a quote I like that says, ‘Act well your part, there all the honor lies.’ I believe you can apply this to every position on a team or a crew.”

“The Kicks” provided Isabella with an added challenge when it came to acting, but one she welcomed with open arms. The show demands not only each actors talents with the scripts but also calls upon their physical abilities when it comes to soccer scenes. “This was definitely the most physically challenging show I’ve ever worked on, but I really enjoyed that aspect of it,” says Isabella.

“I love being active, so I didn’t mind all the running around during the soccer sequences. I think the most difficult thing was making sure to get enough rest!” exclaims the actress before she explains, “Even when we weren’t shooting on the field, we were always in motion – kicking the ball around, or dancing, or goofing around in between takes.”

When one fan asked which soccer superstar she’d love to have as a teammate, Isabella couldn’t help but pick Alex Morgan, the creator of the television and book series! “I would love to play alongside Alex Morgan. She is such a resilient, strong, inspiring woman and I would be honored to have her as a teammate!”

Another fan asked Isabella what was her favorite moment from set. One moment that she’ll always remember is the last day of filming.

“We had a wrap party on the lot after work and we got to watch two episodes of the series on a big screen,” she says of the day she’ll keep close to her heart. “Sitting there with the whole cast and crew and getting a sneak peek at what we had all worked so hard to create was an amazing feeling. We knew we had accomplished something special.” Getting to see two episodes of the series wasn’t the only thing the cast and crew got a glimpse of on that special last day of filming. “They showed bloopers from the show and we were all dying laughing!” she exclaims. “That was the best.”

Isabella calls acting her favorite thing in the world and couldn’t imagine her life without it. “I love diving into a character’s life and backstory and finding out what makes them tick,” she gushes. “I love meeting and working with other actors, directors, and writers. It’s always such a great learning experience because there are so many incredibly talented people in the industry with a unique story to share.” For Isabella, her story started at the age of three. “I always wanted to perform in front of people, so my parents signed me up for children’s theatre. Someone saw me in a show when I was six and suggested that I try acting professionally. I did some interviews, got an agent, and a year later, I was on my first series.”

So how does she manage acting, school, and a regular life?

“Taking online independent study classes really helps with my schedule,” the fifteen-year-old actress explains. “Other than that, when I’m not working I live a pretty regular life. I like to hang out with my friends and do typical teen stuff – sleepovers, going to the mall, and movies.”

With the series starting off with Devin as a new student, and the fact that school is officially back in session for a new year, Teenplicity couldn’t help but ask Isabella for her best back-to-school tips and memories!

On how to survive a new school year, Isabella says with a smile, “My best advice would be to focus on your goals, ignore people who want to bring you down, and stay true to who you are!”

Starting a new school or even just a new grade can be tough. But the talented actress was able to step back and realize that she wasn’t alone when she was a new student.

“My first day at a brand new school was pretty great,” she admits. “I was a little nervous about being the new kid, but then I realized that lots of people there were new. In fact, the girl sitting next to me was new, and we bonded over that and became friends. We kind of went through the day together checking everything out and comparing our favorite things about the school. It was fun!” And if your school year isn’t starting off as great? “I’ve had my ups and downs with school, but I always try to stay positive,” she says. On top of that, she focused on studying hard and learning from her mistakes. “There’s always room for improvement!”

When Teenplicity mentioned that Isabella’s fans had been so enthuasitic and supportive of her, and even submitted some of the questions above, Isabella had to say, “To my fans, I just want to say thank you so much for all the love, support, and all the kind messages you guys send me! You guys really brighten my day.”

Below are some of Isabella’s answers to even more of YOUR back to school questions. Check it out!

QUESTION: Do you prefer getting a new backpack or a new pencil case?

ISABELLA: I prefer getting a new backpack – they’re perfect for carrying around all the back-to-school essentials.

QUESTION: Finish the sentence: ‘The best part of going back to school is…’

ISABELLA: The excitement of starting a new year and finding out what classes you’ll be in and who your new teachers are. Also knowing that you have made it to the next grade. That almost feels like turning a year older. 🙂

Season one of “The Kicks” is available to watch now on Amazon Prime!

***ABOVE PHOTO CREDIT TO MIKE ROSENTHAL