Adapting comic characters for the screen is a family affair for Bodhi Sabongui.

His mother Kyra Zagorsky played Athena on The CW’s Arrow and his father Patrick Sabongui is best known within the DC Universe, most notably the Arrowverse, for portraying David Singh.

“People get really excited about my dad in The Flash,” says Bodhi. “Kids on my football team freak out when he [shows] up to the games.” The young actor adds, “He’s one of my acting coaches so he’s always ready to support me.”

Whether he’s in front of the camera or on the field, he can count on their support.

It helps, also, that despite the entire family’s involvement in one of the biggest superheroes universes in the industry, Bodhi continues to lead a relatively normal life.

“My life mostly consists of practicing and playing football, pre-calculus, and AP World History.” His free time is spent with friends and he adds that he’s looking forward to winter to go snowboarding again. “I think it’s important to live a normal life outside of all of this.”

He continues, “The [Black Adam] premiere was awesome. It was almost overwhelming to see how much people cared about what we had made.” 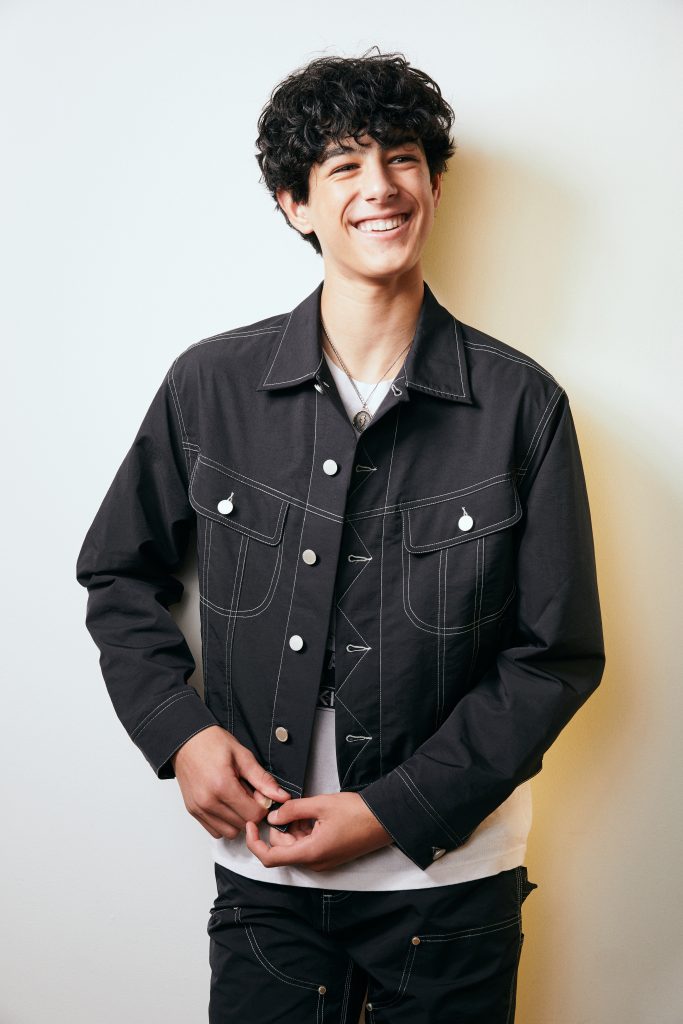 It was at the premiere that Bodhi stole the red carpet spotlight. Dressed to the nines, his sleek outfit was complemented by incredible eye makeup that showcased the Eye of Horus, a symbol of Ancient Egypt used to represent protection, healing, and more. On the decision to include it in his premiere look, the actor says, “I grew up seeing the Eye of Horus all the time. Whether in decorations in my house or my parents’ tattoos, if there was any way to represent my culture publicly, I felt like displaying this symbol would be the best way to do it.”

He is all too aware of what a rarity his role as a Middle Eastern protagonist, especially in a superhero film, still is. “Growing up, I saw Arabs represented as mostly the bad guys on movies and TV shows. I witnessed my dad fighting for positive representation for Middle Eastern/North African actors [throughout] his whole career,” Bodhi says. “I’m happy I got to be that positive representation. I got to work alongside Marwan Kenzari who’s probably the most skilled actor I’ve ever worked with, Mo [Mohammed] Amer who is one of the funniest people in the world, and Sarah Shahi who gave so much heart in this film.”

On the brink of his 15th birthday at the time of the interview, he continues by saying, “As I get older and move forward with my career, I hope I get the chance to step into more roles that make a positive difference.”

The outpouring of love and support for Bodhi and his Black Adam character Amon Tomaz has been visible since the film’s premiere and it’s something that he is grateful for. From reviewers to YouTube videos and Instagram posts, social media has been a great way to interact and view fandom.

“The fan reactions are mostly really nice and sweet. I really appreciate it.” The actor references Jay-Z’s song ‘Takeover’ as he adds, “And all you other cats throwing shots at me, you only get half a bar…”

Long before the film’s premiere and social media reactions, and long before Bodhi was even cast, Black Adam was announced to the world, with Dwayne “The Rock” Johnson attached to star.

“I was born on November 3, 2007, the day after they announced he would be playing Black Adam. He recently posted the screenshot of that headline,” Bodhi says. “The vibe on set was always fun. Everyone was focusing on their work, but we always found time to joke around and make it an enjoyable experience.” This time quoting the superstar’s rap feature on Tech N9ne’s single “Face Off,” the actor says, “Under DJ’s leadership, it was about drive, all about power. We stayed hungry, and yes, we devoured.” Growing serious again, he continues. “There was a lot of figuring out how to make the movie for the audience. Everything he does in his movies is for his fans and what he thinks will make them happy.”

And making audiences happy is exactly what Black Adam has done as it maintains one of the highest audience scores for DC films at 89%.

“He’s a bright-eyed, superhero-loving, skateboarding preteen who wants nothing more than to help free his country. He’s basically a symbol of hope in the movie,” Bodhi says of his character.

He’s a young daredevil but in a more serious sense, he’s willing to put everything on the line to achieve his dream of freeing Kahndaq.

“I approached every scene from the perspective of hope,” he continues. “Amon truly admires and believes in Black Adam, and I loved being able to bring that relationship to life, of a boy meeting his hero. Not to mention I got to have The Rock as my scene partner.”

The actor confesses there were some challenges with filming, citing his growth spurt and change in voice as the reasonings. “I was a kid when we started filming and then when we came back for reshoots a year later, I had grown five inches and I didn’t sound like a kid anymore. By the time we got to post-production, I felt like a different person. I spent so much time in the sound booth trying to replicate the voice I had when I was younger.”

He shares, “Production had to do sound editing to my voice in the end, and I learned at the premiere that they ended up using AI and had it replace my performance in a few scenes, which was a huge surprise to me.”

Another Black Adam surprise for Bodhi came early on in his involvement when he discovered he had already played a version of Amon previously in DC’s Legends of Tomorrow on The CW. One of the few actors to portray the same character – though in different universes – both in the DC Extended Universe and the Arrowverse, he says, “I started reading all of the comics when I first auditioned and it was definitely a cool discovery when I realized I had played this character before on my very first booking with DC. It just felt like a sign that I was supposed to be there.”

Though Amon is a relatively newer character when looking at the whole of comic history, he has a rich story that passionate fans love. Bodhi can be considered one of them. When discussing what interests him most in Amon, both in Black Adam and his comic history, the young actor says, “I love how much courage he has to toy with Intergang. He’s a young daredevil but in a more serious sense, he’s willing to put everything on the line to achieve his dream of freeing Kahndaq.” 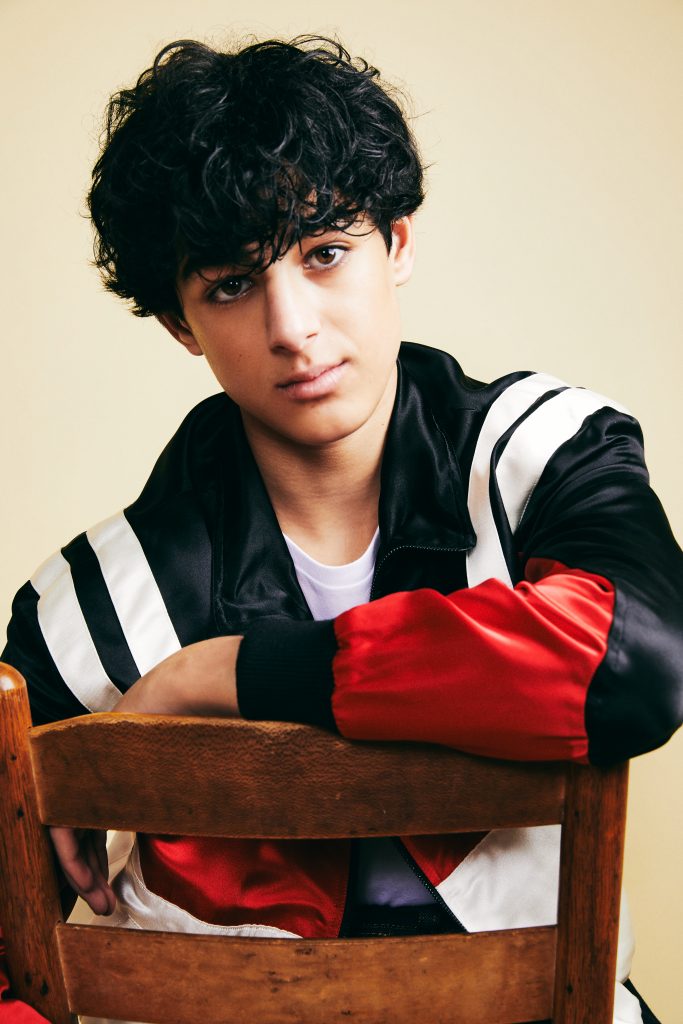 Looking forward to the future, Bodhi has hopes for what will become of his character in the DCEU. “I would love to see Amon become Osiris and join the [Justice Society of America] down the line so I can spend more time working with this cast,” he says.

The Black Adam cast consists of several talented actors, including Aldis Hodge who Bodhi has previously stated to be one of his idols. “Aldis is amazing. It was so cool being able to work with him and see Hawkman come to life in person,” he says. “I loved being on set with Noah [Centineo] and Q [Quintessa Swindell] too since they understood my youngin’ jokes.”

With a plethora of celebrated actors around him on set, there was plenty for Bodhi to observe and take away while filming. “I noticed that Mo was always writing jokes,” the actor shares. “He had multiple jokes prepared for each scene and he never did two takes the same way.”

Bodhi’s favorite memory from the set, however, comes from a day when he got to shoot an action sequence.

“I had the best time shooting the stairwell action scene when Intergang is after Amon. There [were] a bunch of stunt guys chasing me around the railing and I got to juke people out and kick a stroller down the stairs at someone’s face. The stunt team was selling out and did a great job. It was an all-around fun day.”

*Interview has been edited for clarity and length.

Mariah Bozeman Takes ‘The Woman in the Window’

One of the things that have gotten us through quarantine (and in general, life) comes from movies. While theaters no longer felt like a…