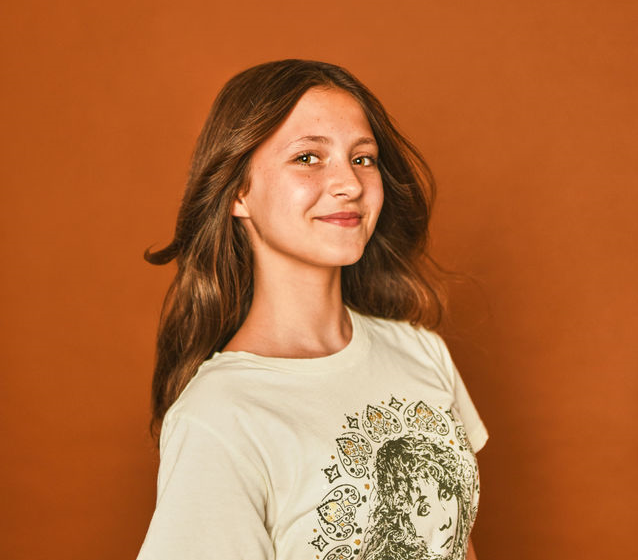 When The Fabelmans hits theaters next Friday, it will give audiences an inside look into what sparked the love of filmmaking in Steven Spielberg when he was young. The semi-autobiographical film inspired by his life traverses different pivotal points of fictional Sammy Fabelman’s childhood and adolescence, showcasing the lasting impact of filmmaking and the discoveries it holds if one only looks.

Actress Keeley Karsten notes that while the film is based on Spielberg’s life and childhood, she adds, “I think what I see in the film is the story of a teenage boy who worked hard and overcame many challenges to pursue his dream. In this case, that dream was to tell stories.” 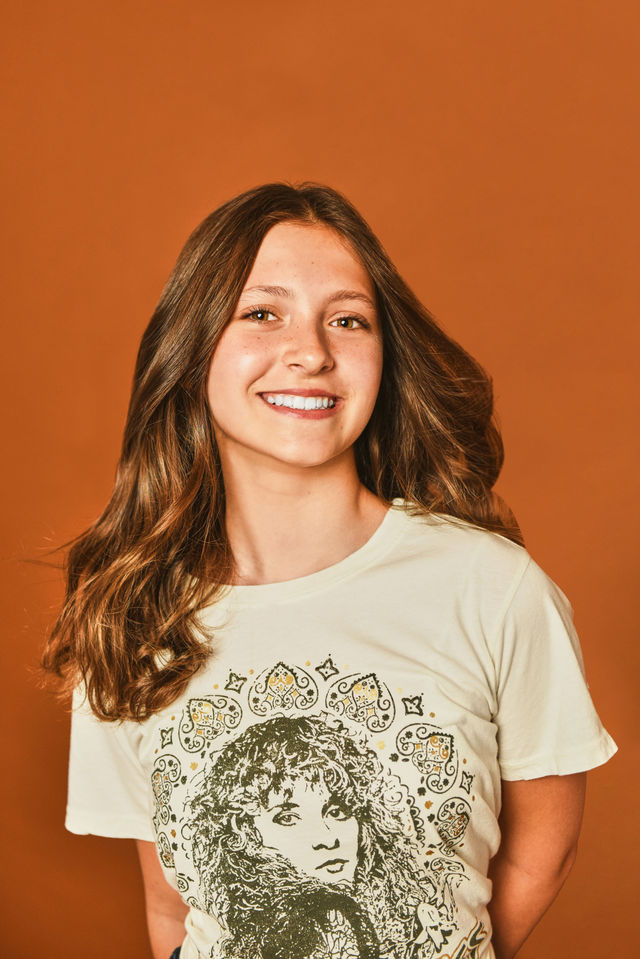 “Natalie is the middle child. She’s Sam Fabelman’s younger sister,” she starts. “I think that Natalie was someone who was not afraid to challenge her family when she thought they were wrong. But I also saw her as someone who says what nobody else in the family will say.”

A case in point comes when Natalie tells Sammy she’s upset because he doesn’t put girls into his movie, a criticism slightly similar to one Spielberg received in 2017. “I felt that line resonated with me because I’m an advocate for women’s rights and I think that Natalie connected with that too. It’s something that we both have in common.”

That passion is a core part of who Keeley sees Natalie as. “I think she loves her family fiercely. She’s loving, passionate, but I think most of all, willful.”

The young actress laughs for a moment as she shares what she’s learned from her character. “I think that I learned a lot from playing Natalie because she brought out feistiness, like just fierceness and love for my family, and the character helped me learn a lot of things about myself.”

If she had any questions about portraying Natalie, the answers could be found around the soundstage. “I didn’t ask Steven any questions because he always provided answers and guided us. But I did ask many questions to Sue Spielberg, who my character was based off of.” Keeley shares that sometimes Sue was on set and she would get to talk to her. At a later point, Sue gave the actress her email address. “Then we would write [to] each other and [we would] talk about things,” she shares with a giddy laugh.

The kind of questions that Keeley would ask include what Sue’s favorite song or band was. “I think most importantly, I was lucky enough to ask how she felt at certain moments and then use it in my work.”

But before she could even make it to set and learn more about the Spielberg family, Keeley had to audition.

“I didn’t know what the project was for other than that it was an untitled Amblin project,” she says of her audition, adding that, at the time, she didn’t know what Amblin was. “But I did my audition and I connected with the character pretty quickly. Then I got the callback, my second audition, which was so much more intense. It was a five-page monologue that I worked really hard on, and, again I also really connected with it.” It was after her callback that she got a call from her agent saying she booked a Steven Spielberg film. “I cried, but they were happy tears!”

Finding out that she booked a Steven Spielberg film for her feature film debut meant that she put pressure on herself on that first day of filming. “I had no idea what to expect,” she says. The pressure quickly faded once she settled in. “However, I did learn really quickly that it was super easy to work on set, and Steven created such a great environment. He shared so much with us. I think so much so that we became a family on set. It was a place where it was okay to make mistakes, so the pressure was more of an afterthought.”

I think it showed me how much I love acting, how much I want to work, and I think I could not have had a better introduction.

A typical day on set for Keeley started with rehearsing for the scene they were going to be filming before getting called to hair and makeup. After getting mic’d up, the actress shares that the cast would then rehearse the scene or dive right into it. “I think when they were setting the shot up, we would go back to school, and on some days we would film then do school for three hours afterward.”

She adds that days on set always looked a bit different. “We were always traveling. Some days we were on location, some days we filmed in a specific place that Steven had been to when he was a kid. Other days we filmed on a set.”

Watching the work of seasoned creatives like Michelle Williams, Paul Dano, and Steven Spielberg was a unique experience for the actress, and one she surely won’t forget.

“I really loved working with them,” she says. When asked if it was intimidating, she says, “I think instead of intimidating, it was inspiring. I think everyone wanted Steven’s story to be created in [the] most honest, magical way. And I think that included everyone working together. I felt really honored to be able to work with everyone.”

Having the veteran professionals work opposite of her meant that Keeley learned a lot while filming the movie. “For example, watching Michelle Williams – she was always really, really focused when doing a scene. It was like she had a bubble around herself and people didn’t approach her. I did learn that it was okay to take that space as an actor. I was able to get to places like I needed to get to even more because of this.”

Another actor on set that Keeley was able to learn a lot from was Crystal.

“We did work with Crystal, the monkey,” she says. “I learned a lot about working with an animal on set. We were taught to be very careful – how to meet, train, and get to know Crystal before working with her. We had to learn how to handle her, what she was afraid of and comfortable with, and it took us a lot of time.”

While working with a monkey may make for the most memorable day on set for most people, the day Keeley chooses to share is sweet, full of the essence of the family that she says the set environment created.

“I remember one day the whole family was driving in a car and we were singing The Four Seasons and Elvis Presley,” says Keeley. “I said, ‘Does anyone know ‘Build Me Up Buttercup’ [by The Foundations]?’ Steven said, ‘Oh, I do!’ And he started singing ‘Lollipop’ with the words [from] ‘Build Me Up Buttercup’ and everyone started laughing,” she says, her laughter seeping into every word as she recalls the moment, “because it’s the wrong song. Then we all just started singing ‘Lollipop’ together, and I felt like that was a fun moment.”

Filming The Fabelmans and experiencing the wonderful set only strengthened Keeley’s love for acting. “I think it showed me how much I love acting, how much I want to work, and I think I could not have had a better introduction.” 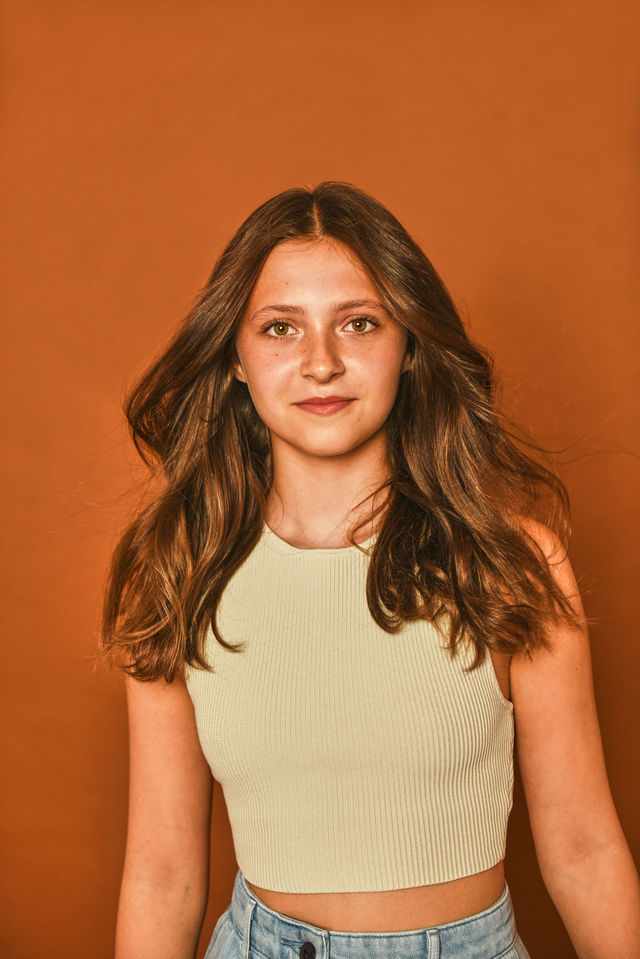 The young actress hopes that audiences take away one important message of the film. “Never give up on your dreams, because they’re always possible. I mean,” she says with a laugh, “mine came true and so did Steven’s.”

When it comes to her creative inspirations, several young stars top her list. While Taylor Swift is on it – Keeley gushed over the singer’s All Too Well short film at the Toronto Film Festival – the actress breaks down who in the acting world inspires her.

Lastly, she includes her parents. She shares how she grew up with theater and that having her parents work in theater, and loving what they do, made it magical to her. “I wouldn’t be half as good without them,” she says.

Her love of acting stems from Broadway in particular. “I grew up in New York, seeing Broadway musicals and plays.” From a young age, she told her parents she wanted to act. “I think I just always knew.”

In fact, her dream role in a Broadway musical would be “any role” in Legally Blonde the Musical. She gushes about the music, praising it before she says, “I know all of the songs by heart. I just think that that musical is so, so brilliant.”

Discussing which moments in film have struck her or made her think, this is filmmaking, Keeley takes a moment. “For me, in The Notebook when Allie comes to the house that Noah built for her… I don’t think a scene in a movie has ever really touched me more,” she confesses with a laugh. “You kind of just know that they’re meant for each other!”

It’s that emotional reaction, so strong and lasting, that Keeley studies when bettering her craft, whether that is through writing or acting.

“I think that I’m a very emotional person. I’m someone who feels things very strongly,” she says. “I mean, for me, I put my feelings into my work; I put it into my writing, my acting, when I’m singing a song, and I think that they all complement one another.”

The Fabelmans releases in theaters next Friday, November 11th.

Batman’s Brandon Spink Also Has a Miracle from Heaven

Brandon Spink hails from Marietta, Georgia with a passion for acting. At age seven, he began his journey by starring in local theatre productions….