When The Loud House first hit Nickelodeon in 2016, Eva Carlton had already aged out of most television geared toward young audiences. So when it came time to audition for Leni Loud, she wasn’t too familiar with all things The Loud House.

“After booking the part, I went through and watched many Leni-heavy episodes to get a better feel for the character and the show overall,” Eva says.

The actress is well aware of the weight placed on her shoulders as she takes on a role other actors have left their mark on. “I was and am definitely nervous!” she confesses. “The Loud House has a huge, active fanbase, and Leni has one of the largest fanbases of the sisters – I feel a lot of pressure to portray her perfectly.” Some of the pressure, no doubt, comes from the comparisons made between her and the previous Leni actress, Dora Dolphin. “It definitely frightened me to see fans angry she was being replaced,” she says. “However, I am fairly confident that fans are going to love Leni Loud in The Really Loud House just as they have for years! I genuinely believe that I am portraying Leni correctly, so I am very excited for fans to see me as her this November!”

Outside of the comparisons, Eva says that she has interacted a bit with the passionate fandom behind The Loud House franchise. “I love the edits they make of the family and of my TikToks! I make sure to let them know that I love their posts by commenting or re-sharing them to my story.”

The cast, most of whom previously worked together for the holiday special A Loud House Christmas, were “incredibly kind and welcoming” when she joined the show. “It’s always scary joining a pre-established cast with some already very tight friendships, but everyone went out of their way to make me feel welcome! I had cast members texting me after our first Zoom table read telling me I did a great job, inviting me to dinner and to hang out, and overall they just made sure to tell me they were very happy I was there!”

Eva is thrilled to be a part of the show as well, shown through her pride in her role and the care she takes in discussing the series. She takes the time to acknowledge the changes from the transition from animation to live-action and addresses fan concerns. Every bit is taken into account as she considers her answers. 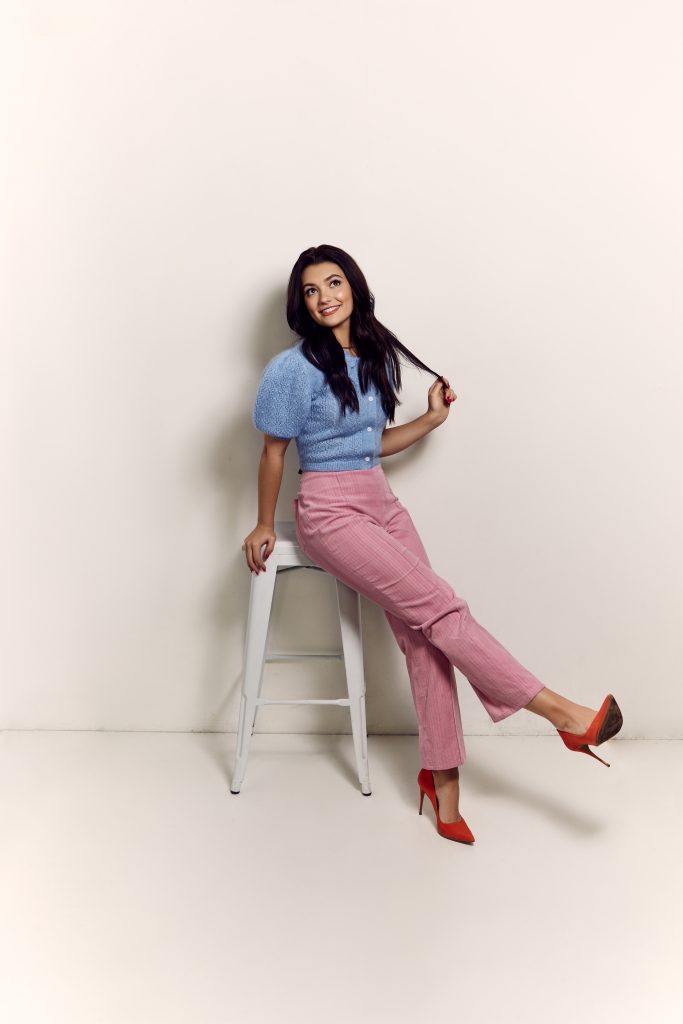 “The Really Loud House differs from the cartoon mainly due to different actors, writers, and directors exploring their interpretations of the pre-established characters,” she says. She continues, “How I perceive and characterize Leni heavily depends on what I see in the script, rather than her cartoon self; I build her persona based on what situations and verbiage the writers conjure for her! I would say that the same is mostly true for the rest of the cast, though I cannot speak for them.”

The different creatives on the show hold respect for The Loud House, even as they bring new stories to the universe in their own, unique way that explores and grows the characters. “Our directors also, while staying true to the source material, have ideas for each of our characters that they steer us towards portraying.”

Another difference in the storytelling is, as Eva points out, the length of each episode/plotline. “In the cartoon, each of the episodes is divided in half, meaning two separate episodes fill the allotted time. However, each of The Really Loud House episodes takes up the full 30-minute slot – with commercials.”

While A Loud House Christmas was the franchise’s first foray into live-action, The Really Loud House will be able to showcase more of the characters, Eva confirms. “Being only an hour long and having 14 Louds, including Clyde, to showcase meant that the audience did not get to see a whole lot of the supporting characters. In The Really Loud House, each of the characters [gets] more material, so the audience really gets to know each of us.”

More material, more episodes, and more time to focus on the different plots and characters simply mean more hijinx for the Loud family. While Wolfgang Schaeffer and Jahzir Bruno already teased some of the trouble they get into during the premiere episode, there’s a guarantee for plenty more ahead.

“Audiences can expect jam-packed episodes with jokes hilarious to all ages! The Really Loud House is absolutely a family show in that it’s very kid-appropriate, but the humor is funny for everyone – including the parents! There are many genuine sentimental scenes in these episodes alongside the lighthearted humor.”

Some of the humor will undoubtedly come from Eva’s portrayal of Leni. Much like her animated counterpart, the actress says both are still “bubbly fashionistas who don’t always understand their surroundings.” One of the bigger differences between the two that audiences will notice is a change in Leni’s vocabulary.

“I think cartoon Leni has more of a unique vocabulary with sayings like, ‘O-M-Gosh!’ that The Really Loud House Leni doesn’t have,” she says. “Additionally, my rendition of Leni is a bit ditzier and a bit more soft-spoken than her cartoon counterpart.”

Being bubbly, a bit naive, and having never been good at school, Leni has been characterized as somewhat dumb, rather than just uninformed or untaught in the proper way.

An interview before the premiere of The Loud House in 2016 revealed the interesting fact that Leni’s name was originally inspired by Lennie Small of John Steinbeck’s Of Mice and Men. In probing Eva for a fun fact about Leni in The Really Loud House, the actress teases, “Fans probably know this as a general statement, but Leni has a hard time differentiating inanimate objects from living beings. You’ll see multiple times throughout season one where Leni personifies objects, not knowing that they are not alive. She contributes to chaos in the family all because she genuinely believes that her accessories, her mannequin, Tanya, and other objects are sentient!”

While Leni might not view things the same way her siblings do, her heart is just as big and full.

“Leni has a great love for each of her siblings and their quirky personalities,” Eva says. “And because of her true love for life as well as her value in kindness, she rarely, if ever, gets mad at any of her siblings, even if she is the butt of a few of their jokes. She wants everyone to get the most out of every day, and is always trying to help despite not always having the best ideas.”

Discussing her character’s arc throughout season one, Eva shares, “Leni really learns to find her strengths and where her intelligence lies. Being bubbly, a bit naive, and having never been good at school, Leni has been characterized as somewhat dumb, rather than just uninformed or untaught in the proper way.” She continues, saying, “In season one, Leni discovers that there are many ways a person can be intelligent, and many ways a person can be taught.”

The series also strengthens the familial bonds over the course of the first season.

“Furthermore, the importance of family is affirmed throughout season one, so Leni continually learns to value her siblings and their relationships.”

One thing that Eva admits she would like to see Leni experience is receiving criticism. “Leni is so kind, she rarely endures any direct rudeness. I think this could be displayed through a story surrounding Leni in her forte: fashion!” the actress says. “It would be incredible to see the struggles and successes that Leni would endure working in the fashion industry. I only think of this because Leni receives chronic criticism with academic endeavors, so much to the point that she’s immune. So what happens when the criticism revolves around something she’s been told her whole life she’s great at?” Eva ponders, “Will she lose her self-confidence? Will her love for fashion waiver? How will she prevail?”

Another thing that Eva would love to see Leni experience would be her creating her own fashion collection. 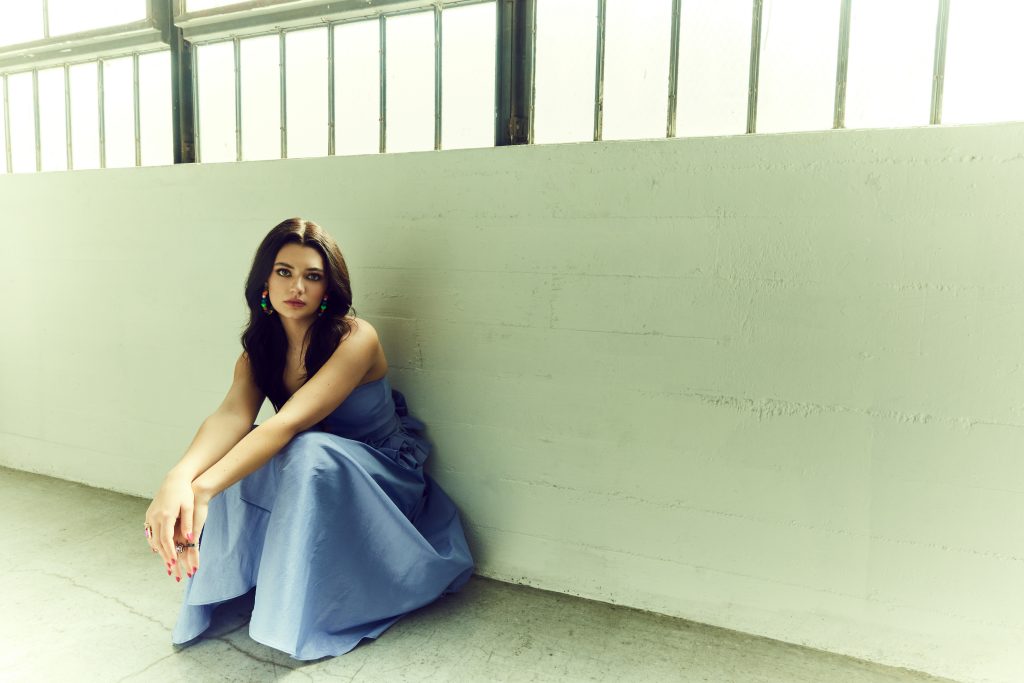 “This ties into my last response,” she says. “I would love to see Leni working on her own collection, dealing with instruction and criticism from fashion greats, and debuting it on a runway! The whole family could model it! We as the audience know that Leni loves fashion, but it would be amazing to see Leni sewing and bringing her visions to life.”

When it comes to Leni’s love life, Eva confirms that audiences will get to see some of it in The Really Loud House. “Leni’s new boyfriend will be making an appearance in season one!”

Just as much fun is happening behind the camera as it is in front of it. When discussing her favorite memories from the set, the rising actress brings up when the cast dressed like the crew for a day.

“I dressed up like our showrunner, Tim Hobert. I wore Lululemon joggers, HOKA sneakers, a large t-shirt, and a visor, and took a photo in the signature ‘Tim’ stance,” she says. The stance, as Eva describes, is being slumped over his chair watching the monitor with both hands holding the script over his mouth. “I sent it to him and it cracked him up! Each of the cast members did this with other members of crew,” she says, including the PAs, ADs, hair and makeup team, and more. “Jonathan Judge, our executive producer and director, even dressed up like our first AD, Julian – he shaved a goatee and everything!”

With the set bustling with actors of all ages, Eva says she’s closest to Sophia Woodward who plays Luna Loud. “She and I are the only 18-year-olds on set, so we gotta stick together!”

As TEENPLICITY concludes the interview, the actress shares one last word of appreciation for the fans of The Loud House and everything it has inspired.

“I am so grateful for y’all and I promise that we will do The Loud House franchise right! Each and every one of us [is] so invested in making our product amazing, so please tune in this November!” 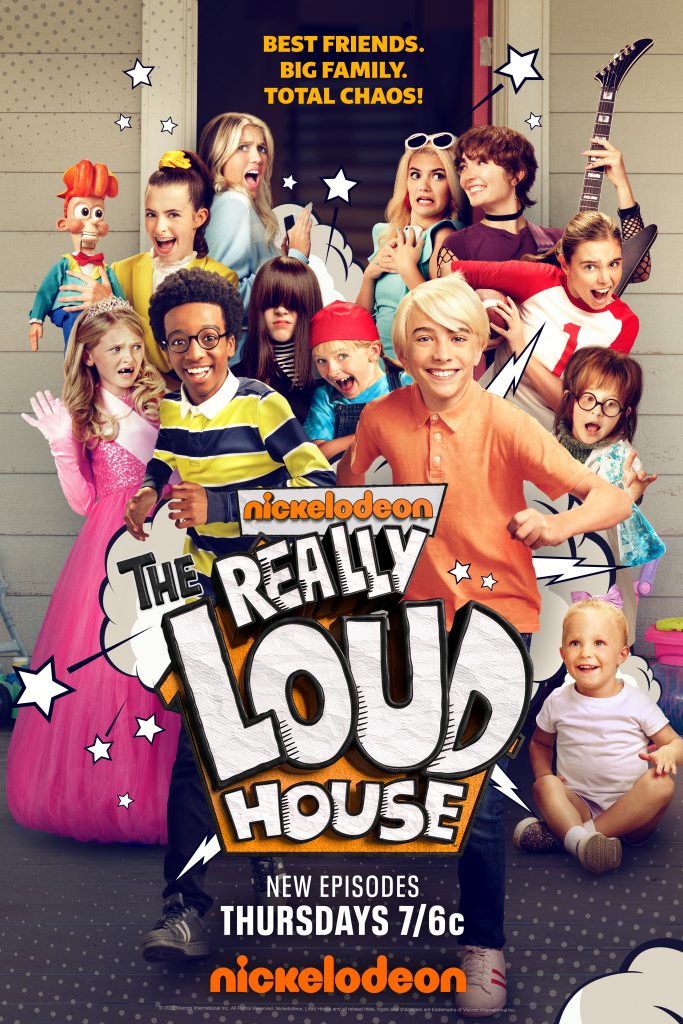 *Interview edited for length and clarity

*Updated Nov. 3rd of 2022 at 12:35AM to correct the statement in regards to Lennie Small & Leni calling the connection a rumor. An official interview, which can be found here, ahead of the original show’s premiere is sourced, confirming that name inspiration.

What Christmas Means To Matt LeGrand

Emerging artist Matt LeGrand discusses how he got into music, his Christmas cover, and his favorite holiday memories. Music has integrated its way into…