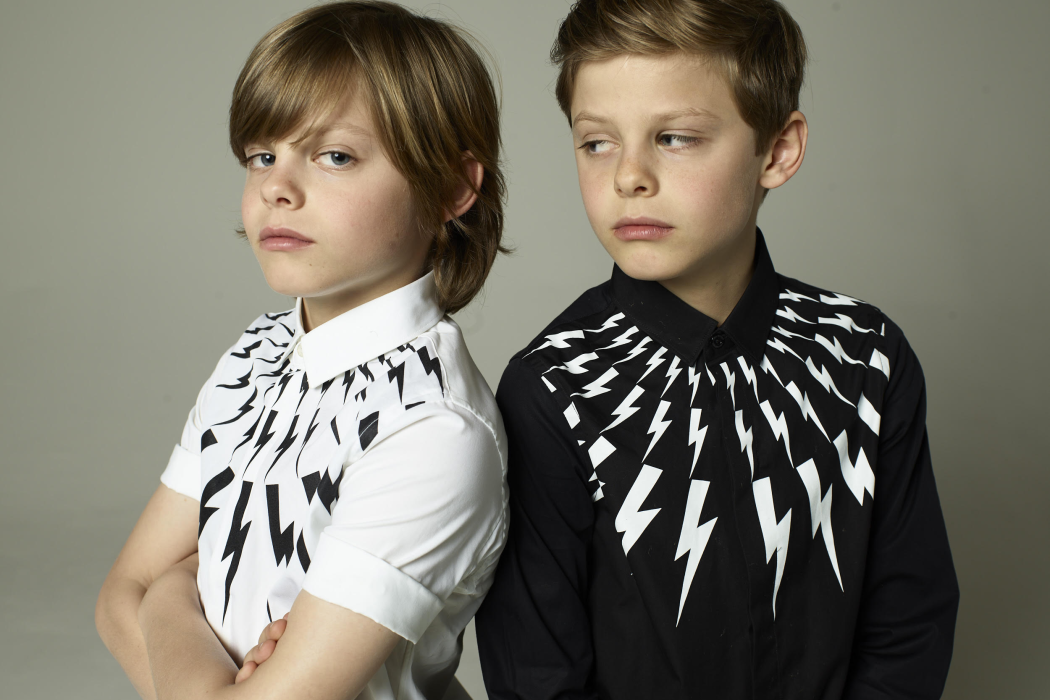 The young twins discuss what fans can expect of their characters in season two of Big Little Lies, what it was like to work alongside acclaimed actors, and reveal some set secrets!

Before they even hit double digits, Cameron and Nicholas Crovetti already spent considerable time with world-renowned actors on a show that took the world by storm.

The two boys are twins hailing from Los Angeles. When not training for the Olympics or competing in men’s gymnastics, one might find the two in front of the camera showcasing their acting chops.

Cameron and Nicholas are best known for portraying Nicole Kidman’s on-screen sons Josh and Max, respectively, on HBO’s hit series Big Little Lies. Based off of the book by the same name, the show follows a small coastal town and the events leading up to a sudden death at a school fundraiser. Season two picks up a few months after the finale of the first season and showcases the town still reeling from that night.

“Well…” Cameron starts with a laugh when asked about what to expect in season two before setting the record straight, “we are not allowed to give anything away, but we can tell you that you will be seeing a lot more of Josh and Max in season two than season one!” He adds, “You also get to see Josh and Max a lot with their grandma, played by Meryl Streep.” 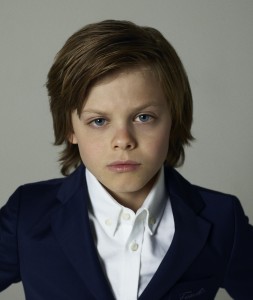 Meryl’s character Mary Louise is a new addition to the show. She comes to town following her son Perry’s death, an accident that everyone suspects was a murder, and stays to spend time with her grandsons as well as to find out the truth. Though she appears to be there to support Nicole Kidman’s Celeste, there is an unease that trails in her wake.

Mary Louise’s presence in the aftermath of the shocking events raises tensions not only for viewers but also Celeste’s family life and between the “Monterey Five”. This is only one aspect of season two that has Nicholas describing it as, “Tons of drama.” Cameron chimes in as well, calling it “[Definitely]. Totally. Amazing.”

As for their characters, the start of second grade lies ahead of them. However, that pales in comparison to the emotional journey they are embarking on as they continue to sort through emotions following their father’s death.

I hope I can do the same thing one day, when I’m an adult actor, working with younger actors.

“Josh and Max are dealing with the death of their dad, Perry Wright – played by Alexander Skarsgård.” Nicholas explains, “Because of this grief, you will get to see Josh and Max in a way you have never seen them before.”

Cameron continues, “The boys run the gamut of feelings while dealing with their dad dying. Josh and Max are angry and sad and show their grief in some very dramatic ways.” He references his brother’s arc in season one – which had Max, mimicking the relationship he saw in his parents, hitting or biting a few of the girls in his classroom – as he teases, “I can say that it’s not just Max that shows his feelings about his home life this time.”

Speaking of the troubles that followed one half of the duo during their first season storylines, Nicholas talks about the attention that playing Max got him.

His remarks earn him a poke in return as Cameron urges, “Nick! We are really good friends.”

Fun moments like these seem to be commonplace in front of and behind the camera while filming. For the boys, they got to experience this with many of the revered actors they worked alongside.

“My favorite scene was with Meryl on the first day we met her,” Nicholas says as he reminisces. “She actually came and sat on the ground with us and played Jenga and we all bonded that day.” Beyond that, the twins connected with Meryl on a deeper level too. The young actor explains how he and his brother had to get their teeth pulled prior to filming which resulted in the duo wearing fake teeth to fill in any gaps and make them look younger.

“Meryl showed us her fake teeth, too,” Nicholas begins. “She told us she chose to wear the teeth to look more like Alexander’s teeth. That really stuck with me, how she thought of everything getting ready to play Alexander’s mom and what an amazing actress she is.”

That really stuck with me, how she thought of everything getting ready to play Alexander’s mom and what an amazing actress she is.

More fun behind the scenes took place at the cast parties that production would host. Cameron says of those, “The bowling party was so much fun. It gave us a chance to just hang with everyone, bowl, and take funny pictures with each other.” He goes on to reveal, “Reese [Witherspoon] is so funny and took a ton of funny pictures with us!”

Meanwhile, Nicholas’ favorite memory from set is from the beginning of the season during a particular dinner scene. “We really got to know her,” he says of working alongside Meryl. “My mom showed us some of Meryl’s films and we told her we saw Death Becomes Her. And she laughed and said, ‘Oh, that is a silly, funny movie.’ We did the imitation of her looking through Goldie Hawn’s stomach and she laughed.”

Some of Nicholas’ most fond memories from set include the actress. He even expresses how he’s learned a lot from working together.

“We had one scene with Meryl that was very intense,” he says, thinking of the aforementioned dinner scene from the very first episode of the season, where the two boys, Meryl, and Nicole are sitting at the table during dinner. During the meal, they briefly talk about grieving the loss of Perry, leading to Meryl’s character letting out a gut-wrenching and agonizing scream. The camera catches the perfectly startled and alarmed reactions from the twins. Speaking of shooting the scene, he says, “Whether the camera was on her or turned around on us, she gave 100 percent of her energy for each and every scream to make sure we got the best take and reaction to her screaming as well. That will always stick with me.”

In Cameron’s case, one moment that stuck out to him and that he’s learned from took place while filming a scene with Nicole Kidman. “Nicole and I had a really tough scene together.” Of her work ethic, he praises, “She was concerned not only about her acting but mine as well. I hope I can do the same thing one day, when I’m an adult actor, working with younger actors.”

As far as characters that the boys wish they could have spent more time with on screen, the answer is unanimous: Alexander’s Perry. “We miss [Alexander]. He was so much fun on set,” the two comment.

Nicholas says, “He told us he has lots of siblings so he loves kids.”

Adding to that, Cameron goes on to say of the actor, “He is so funny; we asked him some crazy questions on season one. You have to remember – we were only eight.”

As for those “crazy’ questions? “I asked him about girls and anything I could think of to ask,” he admits. “He would laugh and answer all my questions honestly.”

When the director called cut and the cameras stopped rolling, the set became a trickster’s paradise for the twins. “We had so much fun filming. We like to play practical jokes,” Cameron starts. “Whenever we would be between scenes, we were thinking up ways to scare people.” An idea had struck one day and, much like he does while filming, the young actor immersed himself as much as he could for this joke. “One day, I dressed up in my Halloween Scream costume and wore it to set. I scared a bunch of people that day,” he reveals and it’s easy to imagine the pride and joy he carries with that. 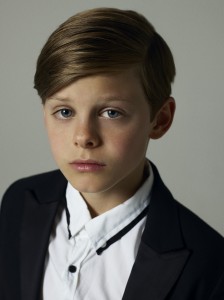 Adding to that, Nicholas says, “Also, whenever we would be between turning the camera around or long takes, the director would play music.” There is a specific day that sticks out in his mind. “I remember one day playing ‘Safety Dance’ for Meryl and she did the running man. Nicole would sometimes dance too and she’s a really good dancer.” He even dishes out a something that you may or may not have been curious about regarding some of the show’s stars and  one recently popular dance move. “My favorite was when everyone on set would all of a sudden break out into the Floss. It was funny to see Meryl, Reese and Nicole do it.” He exclaims, “They were so much fun!!!”

Off of the set, the bonds between their costars are still strong. According to Cameron, the twins get to hang out with their fellow cast mates all the time.

“We had so much fun. We filmed on location in Monterey and when we weren’t filming, we all hung out at the hotel – swimming, going to the aquarium and exploring the beautiful Monterey area.” He continues, “Ever since we finished season one, all the Big Little Lies kids have kept in touch and the kids that live in LA we see all the time.”

“Most of the cast stayed at the same hotel as us so every day after we wrapped, we would hang in the lobby and eat together,” Nicholas adds. “Sometimes we would have play dates with Nicole’s kids when they would visit set.”

The boys are keeping a busy schedule outside of the hit drama series. For Nicholas, he’s in a film titled Sound of Philadelphia which he excitedly explains was filmed in Europe earlier this year. Cameron teases that he’s closing a deal for a new show that he’s extremely excited about, though he can’t say anything about it right now. If you’re itching to see the two together on-screen in other projects, they’re working on that too! “Right now we are doing a horror film together as twin brothers, but we can’t say the name of the movie yet,” dishes Cameron.

If you want to see more of them as Josh and Max in Big Little Lies after this season, the boys have some advice: keep sharing your love for the show!

Big Little Lies is airing on Sunday nights at 9PM on HBO.

***Above photo credit to Ben Cope