The up-and-coming actor discusses the jump from theater to television, “On Becoming a God in Central Florida”, and the advice he got from some cast members.

There’s a sense of giddy-nervousness coming from Cooper Jack Rubin during his interview with Teenplicity. Although he’s already graced many stages in his various theater performances, television is a first for the young actor.

At the age of three, Cooper witnessed that magic of Phantom of the Opera. “After that, I started to do musical theater in some local shows and that was pretty awesome for me,” he says. The true inspiration to pursue acting came from an older classic. “It was really when I saw Wizard of Oz and Judy Garland’s magical voice and her talent! I knew that I wanted to start acting at that point because, I mean, she was so effortless in her acting. I shouldn’t even say acting because it was so realistic!”

Cooper’s love for theater did not appear from nowhere. His family consists of theater lovers. The family cat is even named after famed Broadway and West End composer, Andrew Lloyd Webber. However, Cooper is the only one to practice the craft. “They’re really supportive and they support me when I’m doing theater,” he says of his family.

“We’ve seen Wicked about five times; we’ve seen Phantom of the Opera… a lot of times,” he laughs after contemplating for a moment.

Shocking – there’s some pretty interesting plot points that happen during the series.

Phantom of the Opera is a show that Cooper would love to star in one day. “I think I just really want to be the Phantom because he’s just so misunderstood that if I had the role, I could really play around with his emotions and movement and the way he talks.” Another role he’d like to take on in the future is Jean Valjean from Les Misérables. “It would just be fun to belt out all the tunes,” he exclaims.

The young actor’s energy only amplifies as “On Becoming a God in Central Florida” is brought up. A Showtime original, the show takes place in a small Orlando-adjacent town in Central Florida. It follows water park employee Krystal Stubbs [Kirsten Dunst. Melancholia, Bring It On] as she maneuvers her way through a pyramid scheme orchestrated by filthy rich Obie Garbeau II [Ted Levine, The Silence of the Lambs, Shutter Island]. Cooper plays Harold, the beloved son of Krystal’s friend and coworker Ernie [Mel Rodriguez, Little Miss Sunshine, Panic Room].

The first two episodes of the series became available to view – for free – on YouTube a week prior to the premiere. With that, Cooper has been able to read some comments and see the reactions of audiences, an exhilarating prospect for the actor as this is his television debut.

“I read some comments and everything to see how people react and it was kind of cool to see that,” dishes Cooper. Heading into the premiere, his voiced his feelings. “I’m super excited now. I mean, it was so great to work on that I feel super enthusiastic about everything and what’s going to happen!” He lets out a laugh at his own excitement. “What I’m trying to say is that I’m really, really excited.”

His feelings are well justified, considered the rave reviews already pouring in. In addition, this dark comedy is already setting its unique footprint on this fall’s television lineup with its cast and story.

Describing the show in three words, Cooper starts, “Quirky – because it’s kind of all over the place sometimes. Funny.” He stops to let out a laugh, obviously thinking of a certain moment from the series. “Because it’s funny! Shocking – there’s some pretty interesting plot points that happen during the series. Not going to give anything away! But it’s shocking.”

Teasing aside for the moment, the actor’s biggest excitement might just lie in seeing everyone appreciate the dedication by the cast and crew for the show. 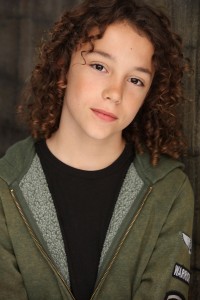 “I’m really, really excited for everyone to see the cast [and] how amazing they did on the show because I love everybody who was on set. I’m super excited for people to see just how it all came together.” Thinking of the show, he says, “It turned into this magical product. I just loved every single second of working on it!” The smile is evident in his voice as he talks. Lacing his next words with hopefulness, he goes on to say, “I hope that everybody likes it and I think they will.”

Considering his previous work in theater, “On Becoming a God in Central Florida” was a completely different environment for Cooper. “I was familiar with everything,” he says of his time in theater. “I was familiar with everything that it took to make a good show. But this was a tiny bit…” He pauses for a moment before sheepishly admitting, “It was more nerve-wrecking because this was my first time on a big project like this. So I eased into it.” Much like he’s become during the interview, Cooper’s confidence while filming the show grew as time went on. “I felt comfortable, excited to continue shooting. Everyone was so nice. And now I’m really thankful to have this opportunity!”

The chance to play Harold offers the actor the ability to exercise his many talents, like singing and dancing.

“He’s essentially an introvert,” Cooper says of his character. This is evident from the first time audiences see Harold in episode two. “He hides his passion of the arts; he won’t tell his parents. So basically, he’ll go into his room, shut the door, and let loose.” While viewers will get just a tease of his singing ability in the second episode, they will have to wait a little longer to see a bigger performance. “In the show, he dances to Paula Abdul’s “Opposites Attract”. I loved shooting that scene,” he comments, his grin obvious as he speaks. “Overall, [Harold] seems to have a secret. We’re all just not really sure what it is.”

While Harold is far from the only one in the small town to be hiding things from those closest to them, it is no secret that Cooper had fun learning the moves for his character’s special moment.

“It wasn’t that hard for me!” he says of learning the choreography. “My mom and I pulled up the video on YouTube, watched it over, and over, and over again and then I started to memorize some of it.” He goes on to tease of the performance, “I say, ‘Some of it,’ because after that, I kind of infused it with my own moves. That’s pretty much what you’ll see.”

I’d love to be in a movie again but as long as I get to act with great people, whatever comes, I’m happy with.

Since this is all still a secret from his parents, there is only so much time until he will have to face the music and let them know of his preference for the arts instead of sports, like his father Ernie pushes so much. “You’ll just have to tune in to see!” Cooper says about this, grinning and laughing, dodging spoilers like a pro. He is able to dish, “[Harold] and his dad have a great relationship but sometimes things get a little rocky during this season so – watch it!”

[Teenplicity just wants to place a theory here that maybe Ernie feels something for Krystal and Harold has caught onto it or is figuring it out. He seems to be very inquisitive about his father’s feelings regarding Krystal’s situation so time will only tell…]

Talking about his on-screen parents Mel Rodriguez and Beth Ditto [Don’t Worry, He Won’t Get Far On Foot, ‘Nocturnal Animals’], Cooper only has words of praise to rain upon their names. “Mel is an unbelievable actor,” he starts. “Sometimes I would just watch him in awe because he was so good. Beth and I got along great.” He goes on to confess, “I think the crew might think we’re both crazy. Sometimes we dance, we sing; it was really, really fun.”

Working with them, and the rest of the cast and crew, provided a great learning experience on multiple levels. He received advice from some of the other actors while filming. “Mel told me to always believe in myself and to keep going and never give up. Mr. Levine, who plays Obie Garbeau in the show, told me – for some reason –” he says, sounding a bit quizzical still from this piece of advice, “To always use good utensils – and have a good lunch.” Cooper can’t quite keep up his giggles as he adds, “I’m not really sure what he meant by that but now I always use the good utensils.”

In addition to the knowledge shared by fellow cast members, the actor enthuses that he learned a lot overall. “I learned how hard the business is, how long it takes to do things right. I learned that even though you may see a couple people on screen, there’s so many people working behind it.” It is something he is even still realizing further as days go by. “Even my parents and I were talking about it the other day. Like when you see Krystal and Cody [Théodore Pellerin, Genesis, ‘The OA’] on screen.” He goes on to talk about how some might not realize that there’s 40 people behind the camera “making sure everything is right and perfect for the scenes.”

Looking into the future outside of “On Becoming a God in Central Florida” has Cooper open to any opportunity that may come his way. “I love acting,” he gushes. “I don’t really care if it’s TV or a movie, it doesn’t matter. I just hope people enjoy what we put together.” He goes on, showcasing exactly the type of heartwarming person he is, saying, “I’d love to be in a movie again but as long as I get to act with great people, whatever comes, I’m happy with.”

If that future opportunity happens to be a role that Huge Jackman would jump for, well, that’d be a dream for the young star.

“My parents always tell me that I should try to be a triple threat which is dancing, singing, and acting. That’s why I look up to Hugh Jackman because that’s really what he is!” Cooper would love to take a role like Hugh’s in 2017’s The Greatest Showman. “That movie was really, really good.,” he adds. In fact, he wouldn’t be opposed to even taking up the mantle of P. T. Barnum, circus ringmaster. “That is really great because that’s where I can express my talent for acting, singing, and dancing.”

Still, Cooper looks for the best in any situation and continues to say about his perfect dream role, “To be honest, any role that is actually a good fit for me.”

“On Becoming a God in Central Florida” airs Sundays on Showtime at 10PM.

***Above photo credit to Shandon Youngclaus