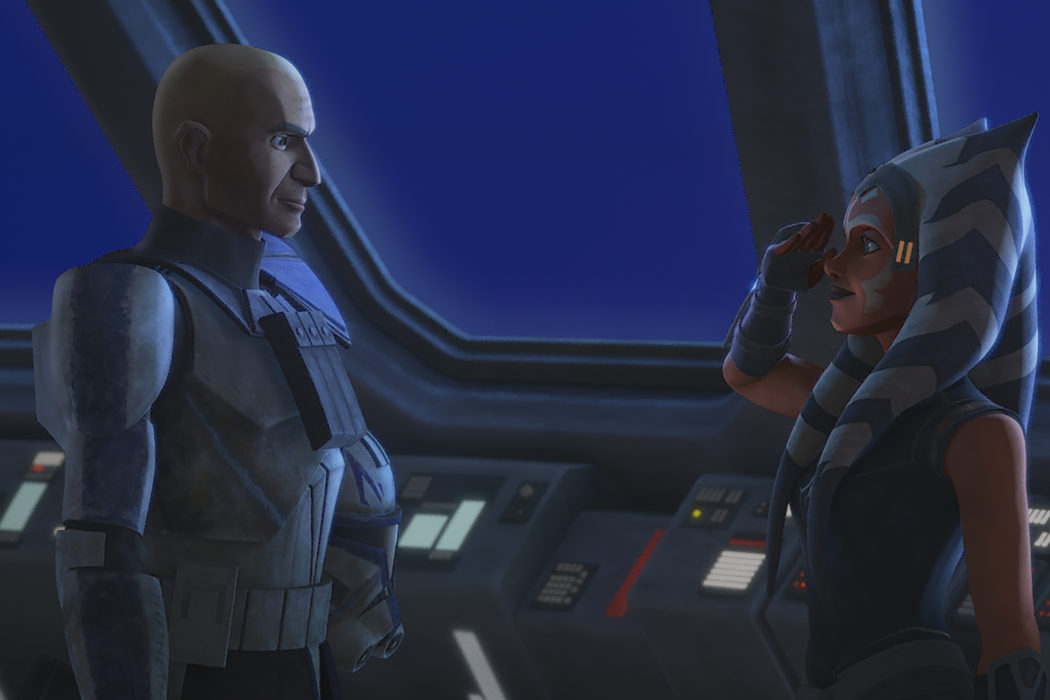 The newest The Clone Wars episode “Shattered” is a masterclass in tension building. From the music to the animation to the acting, each aspect of this episode feels like a long-played, intense game of chess finally coming to a conclusion.

Written by Dave Filoni, it is obvious that there is no person – other than George Lucas – that has the understanding of Star Wars and incredible talent of storytelling to pull off an episode like this. It perfectly thrusts you into the darkness of the events of Revenge of the Sith while taking audiences on their own journey.

This episode starts off not long after the events of the “The Phantom Apprentice,” with Maul captured and Bo-Katan Kryze handing him over to Ahsoka. The latter intends to bring him to the Jedi Council on Coruscant where he will face justice for his crimes as a Sith. Ahsoka’s journey runs into a snag when, while in hyperspace, Darth Sidious orders clone troopers across the galaxy to execute Order 66. With her life suddenly in danger because of the very men she trusted and served beside for years, Ahsoka finds herself needing Maul’s help to escape alive.

Where “The Phantom Apprentice” held a dark, intense feeling of dread and heartbreak, “Shattered” is wrapped up in drastic foreboding, intent on putting you on the edge of your seat, anxious for a story you know to be unfolded unlike it ever has before. So beautifully dark and high in anxiety, you feel your heart race and darkness enveloping you.

The scenes leading up to the command of Order 66 are crafted beautifully. I can feel the chills, despair, and hopeless crawl up my spine as the establishing shots of the ship give an idea as to just how much Ahsoka’s world will turn upside down.

The immense amount of clone troopers in every nook, cranny, and hanger bay on the ship, in the halls and on the command deck, is terrifying. Each one looks up to Ahsoka with the same amount of admiration and respect as they always have but the difference is lies within the score. Kevin Kiner absolutely drives home the all-encompassing anxiety and inevitable destruction and heartbreak. You can sense what will happen – what we all know is going to happen – and yet The Clone Wars teams still have you on the edge of your seat. Something bad is going to happen and it is going to be devastating in every way.

These shots feel as if the Dark Side of the Force is real and has manifested itself on-screen.

I have never felt such an overwhelming sense of devastation before and I can practically feel Ahsoka’s despair as she has to take physical steps back – hearing the voices of Windu, Palpatine, and Anakin as the latter falls to the dark – and imagining myself just as physically and emotionally taken aback. The audio, taken from Revenge of the Sith and mixed with new recordings by Matt Lanter, was such an incredibly heartbreaking and chilling addition. I can picture Hayden’s face of despair in my head as Matt’s voice yells, “What have I done?!”

The intensity comes to a climax when, after Rex and the clones receive the command for Order 66, the world feels as if it crashes down on Ahsoka, and The Clone Wars series as a whole, and she now has to protect herself from the men she trusted and fought beside for years, who she has become companions with and confidants. There is no one to help her out, no Master or peer to figure out what to do. This is possibly the most desperate and alone Ahsoka has ever been. Despite their previous relations, to survive means that it is currently either her or them.

To try to get into words the incredible heaviness, impending devastation, and deep foreboding that the episode holds is immensely difficult.

The overwhelming anguish of the events that take place in the first half is palpable. I feel as if my shoulders cannot rise under the weight of the betrayal and complete sense of isolation that I imagine Ahsoka is feeling. 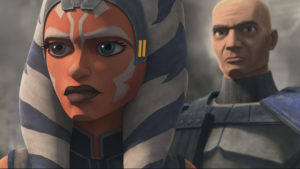 The second half of the episode shows Ahsoka, at a dead end and grasping for a chance at survival, turning to Maul. In what may be one of her darkest moments – outside of the Mortis arc – Ahsoka offers Maul up as a distraction and a target for the troopers so that she can escape.

Maul reminds us through a few small glimpses of the unhinged madman he once was. Between discovering the true depths and layers of his former master’s plan to being truly alone in the universe with absolutely no one under his control or by his side, he forges a path of destruction towards his exit that makes sure the audience doesn’t forget how powerful he is.

One of my favorite aspects of this episode is Ahsoka herself. In her arc earlier this season with the Martez sisters, she is presented with two paths to her future. Trace representing the path of hope and one of good in the universe with good that needs to be done; Rafa represents the bitterness and selfishness that could consume her if she holds a grudge against the Jedi Order and what they’ve done to her. By the end of her time with the sisters, Ahsoka is sure of herself and what she needs to do.

While she is no longer a Jedi, she still holds immense power to help others, whether it is an entire planet like Mandalore or the individuals in her path, like Rex.

“The Republic couldn’t have asked for better soldiers… nor I am better friend,” Ahsoka says to Rex moments before the order is sent out. They both prove the worth of their friendship as they find themselves in a situation they never anticipated. Rex struggles against the command. He tries to fight it, though he fails. He still attempts to send a message to her as tears roll down his face and his hands quiver under the daunting task set upon him.

Meanwhile, Ahsoka’s faith in other people, something no doubt influenced by Anakin and his faith in those closest to him, shines in this episode. Much like she couldn’t believe that Anakin would fall to the dark side, she doesn’t believe that Rex is beyond saving. She senses the message that Rex tried to convey through his inner conflict and, upon realizing what Fives discovered, is determined to save her closest friend. She puts her life on the line and faces the potential to be shot down by her soldiers for the faith she has that getting rid of the inhibitor chip will save Rex from the dark influence programmed into him.

One of the most important moments in this episode comes when Ahsoka puts her faith back in the force. Where she previously tried to hide it, not use it if she could help herself, and attempt to rid herself of the person she had been before, here she returns to the force with open arms and an open mind. She repeats, “I am one with the force and the force is with me,” and the force helps her in locating the chip.

This scene really captures and sets in stone Ahsoka’s future. While she may not be a Jedi anymore, she is healing her relationship with the force that has been staggered through her struggles since leaving the temple, and she is trusting it to guide her. She is not tied to an order but instead bonded through just the force.

Any levity that I felt – at seeing Rex without his inhibitor chip and him and Ahsoka having each other’s backs once again – slips away with the end of the episode as it becomes a stark realization that there’s practically no way out. Clone troopers are bearing down their door and they are only two people against the hundreds of clones that have tracked them down because, after all, good soldiers follow orders.

This episode, much like the rest of the Siege of Mandalore arc, plays out very theatrically and in a way that heightens every sense.

As I mentioned previously, the sound team – especially Kevin Kiner – completely transformed and lifted this episode. The story, dialogue, and animation are all incredible, but the music ties it all together and sells the foreboding that wraps around the episode. It is possibly one of the most chilling tracks I have heard on screen. The music is its own character in this episode in a way we haven’t experienced before.

I truly don’t know how they’re going to end it all, but this has been such a wonderful ride that’s ending on the best notes.

The series finale of The Clone Wars premieres on Disney+ on Monday, May 4th.

NYCC – The Cast of ‘Big Mouth’