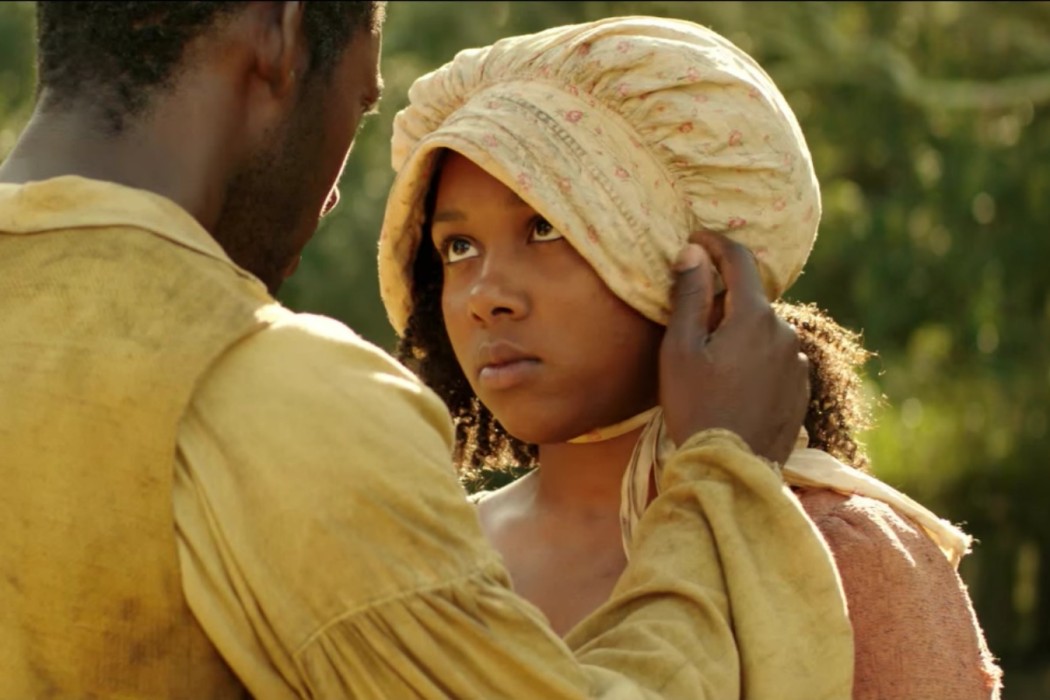 When Roots first aired as a miniseries in 1977, it aired over eight nights breaking outstanding records including winning thirty-seven Emmy’s, a Golden Globe, a Peabody, and being watched by an estimated 130 million viewers. The miniseries, based on Alex Haley’s novel, Roots: The Saga of an American Family, depicts the life of Mandinka warrior Kunta Kinte and his descendants after he’s sold into slavery.

E’myri Crutchfield plays the teenage Kizzy in the Emmy and NAACP nominated, record breaking 2016 remake. Airing over four nights during Memorial Day weekend, E’myri worked with the likes of Malachi Kirby, Forest Whitaker, and Emayatzy Corinealdi to name a select few of the talent.

Living in New Orleans, Louisiana, in order to get the role of Kunta Kinte and Belle’s daughter, E’myri was submitting video auditions to her manager to send to the casting director for about three months when she let her manager know she was getting ready to get braces, “She immediately told me, ‘Do not do it,’ but she didn’t give me a reason. So, about two or three days later, she finally told me that she was finalizing the deal with me being Kizzy and that’s why I couldn’t get braces because I couldn’t [play] a slave with braces.” 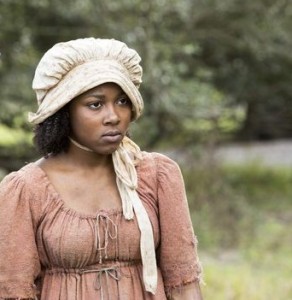 Getting to be in a historical and massive project such as Roots, E’myri explains that all the work she had to do helped her in more ways than one, “I learned a lot from working on that show. Just being around the people I was with, I learned a lot historywise, education wise, and even acting wise. It helped me get my feet more to the water and understand my needs as an actress and what I can ask for, the do’s and the dont’s, so overall, it gave me a good life experience.”

When E’myri takes over as Kizzy in the miniseries, Kizzy is approaching the age of 15. Her slave owners niece, Missy (G Hannelius) is secretly teaching her how to read and Kunta is teaching her about her cultural heritage by training her to be a Mandinka warrior. “What stands out to me about Kizzy is that she wants to be more than just a regular slave,” E’myri begins about what it is about Kizzy that stands out to her. Citing Kizzy’s drive and the goals she set for herself despite her the circumstances she’s forced into is what most speaks to E’myri. “She wanted to follow the Kinte Dynasty and become a Mandinka warrior which her dad didn’t want her to do because it was a boys role—a man’s role—and she wasn’t a man. She was a girl, but she wanted some part of where her father came from in Africa. She wanted some type of part of that so that’s what made her do that. And I commend her for that.”

The first scene E’myri shot as Kizzy is one of the most emotional, intense, and graphic scenes of the episode; when Kizzy is raped by and later gives birth to her new slave owner Tom Lea (Jonathan Rhys Meyers), “[Filming that scene first] helped me because once I got that out the way, it wasn’t really that hard for me because the cast and crew made me feel comfortable. But once I got the most intense scene out the way it helped me get through the other scenes.”

“I did a lot of my research and even when I got on set, my biggest fear was that it was going to be so awkward, you know, like going through that rape scene was going to be the most awkward thing in my life. But, it was actually the most comfortable, everyone on set made sure I was comfortable and that we didn’t step over any boundaries so that was fine,” she explained further.

“What surprised me the most was that all my life I’ve been going to acting classes and auditioning, but I’ve never had to read such an intense script or act out such an intense script so it surprised me how far I got myself, how far I went and now I know I’m capable of doing anything now,”  she says about getting to play the lengths that Kizzy goes through. “I feel like it was a big accomplishment for me to even do those rape scenes or give birth and just cry because on set when they’re filming, you have to do a thousand takes from each angle. We had to film the rape scene from every angle, I had to give birth from every angle. So it was just knowing that I can do that over and over and over again which—it was hard, but I did it.”

After she finished shooting, E’myri watched the original Roots for the first time, making this decision so she would have the opportunity to understand Kizzy for herself and create her own version. But, she hopes the remake will offer a powerful takeaway especially for the generation of people who are being introduced to it for the first time now.

Having to educate herself on Roots when she first booked the role, E’myri stresses the importance of knowing not only about slavery, but what slavery left and its relevancy in what is happening in the world today, “I hope that by watching [Roots], people take away the story that people went through, the history of slavery, because slaves were people taken away from their families and never seeing them again. That’s all they had and imagine just taking away someone from something they’re used to and isolating them to where they feel alone.”

For the moment she hopes leaves with viewers, E’myri cites the powerful ending scene of her episode when she walks into the water late at night and almost drowns her son, “Kizzy wanted to drown Chicken George because she didn’t want him because he was the slavemasters son. She was hurt that she couldn’t protect herself and she wasn’t strong enough to overcome what she’d been through so she just felt so down and, at the lowest point in the world, she wanted to drown her baby. I feel that a lot of people have to take some type of sympathy away from that and know that we have to be aware of how we treat each other, we can’t dog each other out.”

Now, E’myri is nominated for the NAACP Award this year for Outstanding Performance by a Youth, which she and her mom found out on their way to picking up her brother from school. After her mom received an email congratulating her for a nomination but the email didn’t load, E’myri excitedly went to check her phone for the both of them to find an email from A&E congratulating her for the NAACP nomination and offering a bouquet of flowers. “We were ecstatic because that’s every actress or actors dream to be acknowledged for their work and what they’ve done,” E’myri reflected. “For them to even consider me as a nominee, that was amazing, it was such a great feeling.”

She can also be seen in the Amazon series The Kicks, based on the popular young adult book series by Alex Morgan. While, sadly, there aren’t plans for a season 2 of the all-girls soccer team centered show, E’myri shares what she would have wanted from her character Zoey, “We had plans that if there were a season 2, showing Zoey’s family and her life a little bit. In the first season, we see Zoey a lot but it was only on the field, you didn’t see her parents or her siblings or her siblings or where she comes from, what her room looks like, so I kind of wanted more intimacy scenes with just her and her family and her background.”

Focusing predominantly on school, E’myri says she is open to new roles and opportunities including her interest in fashion, hair, and beauty. As a strong advocate for black girls embracing their natural hair, she shared her own natural hair journey to gain the beautiful hair she has now, “At a young age, my hair was really, really long, but it was damaged. When I was in about the fourth grade, my mom was going to take paternity pictures and she took me to a hair stylist who was supposed to give me a trim but she gave me a haircut because my hair was so damaged. So, my hair stopped at my shoulders when it was flat ironed, but when it was in its natural state, it shriveled up and looked like a little Jheri curl bush which I hated so much.” She laughed before continuing, “I wanted long hair and instead, I had this little Jheri curl bush that I couldn’t stand. So, I took it upon myself to learn how to do my hair and to grow it out and from that day I started watching Youtube videos.”

She gives a shout out to YouTuber Natural85, “I watched her videos and other videos and I just learned how to take care of my beautiful hair and every day my mom and I would go to the store and I would walk out with a new natural hair product. I’m a hair junkie, I love buying natural hair products. If you look through my bathroom your mouth would drop.” One of her favorite products is the purple bottle Aussie hair conditioner which she finds herself always going back to.

“So yes, a year to two years later, my hair grew magically, you saw a huge difference from a small Jheri curl bush to a big curl and from there, I’ve just been doing the same thing,” she continues. “I’ve been taking care of my hair, I flat iron it when I need to, I don’t really like my hair flat ironed because my hair is thin but when it’s natural, it’s very thick and when it’s flat ironed, you can see the fineness in it so that’s why I don’t like to get it flat ironed, but if I do, it’s about every once in awhile.”

Closing out the interview, E’myri discussed what she hopes to do with her platform. “Well, of course, I would like to inspire girls to love their natural hair. Don’t perm it please, do not. Love yourself, love your hair because the way that our texture is and the way it’s amazing how our hair grows out of our head like it’s just this zig zag pattern or this s curl like it’s very interesting how it grows out of our head,” She said passionately.

“I would hope that I would try to put that in towards other girls,” she says referencing how her embracing her natural hair influenced her mom to do the big chop and go natural as well which resulted in her appreciating the s curl texture of her hair. “So, I will [working towards] that for the most part and I want also to inspire girls to stand your ground and be you. Do what you want, do not let anyone stop you, don’t hold back.”