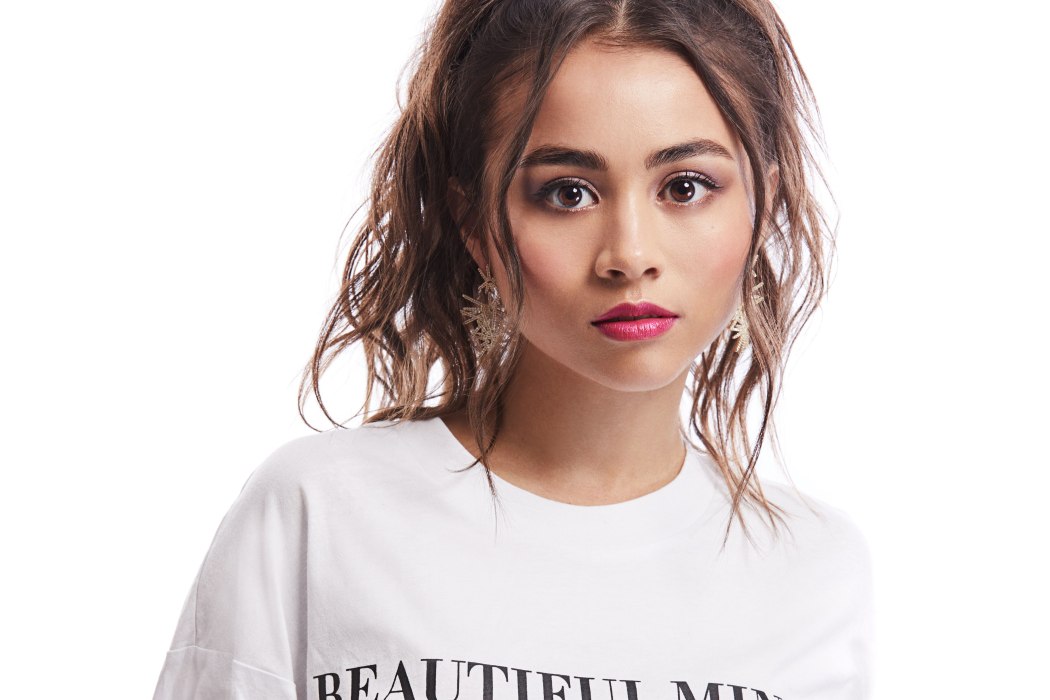 The Kim Possible star discusses the new hit Disney Channel Original Movie, her memories from filming, and what she’s up to next!

It is often a daunting task for any young actor to take on the role of a classic character in the reboot or remake of a beloved series. For some, it’s every scarier to introduce a new character to the well-known dynamics.

In the case of Ciara Riley Wilson, excitement overwhelmed her at the idea of bringing a new character into the universe of Kim Possible.

Prior to leaving her mark on Kim Possible, the Portland, Oregon native started her career at eight-years-old through radio advertisements and local television commercials. No stranger to performing, Ciara also pursued dance. Cultivating her passion and becoming a professional dancer, her high skillset in multiple backgrounds of dance has led to her appearing in music videos for famous artists like Usher and Fifth Harmony.

With entertainment practically in her DNA, Ciara makes the confidence that accompanies being a performer look effortless.

With Athena, the new generation also has a character they can hold onto as their own.

Although it’s hard to imagine the actress as anyone but Athena, she reveals that over the month-long process, she originally auditioned for the titular character Kim Possible. “It was cool to get into [Kim’s] mindset before becoming Athena,” explains Ciara. “It was a great exercise for me as an actress to create Athena’s backstory and personality because she wasn’t in the original cartoon series. I did many director’s sessions, chemistry reads with the cast, and producer sessions before landing the role!”

As glamourous as landing a role may be, finding out about looks slightly less so. “I was in my pajamas doing schoolwork when I got the call,” she admits. “I immediately started bawling. It was a huge release of emotions.” Once the initial shock wore off, the excitement set in. “I jumped around and called my entire family to tell them the good news. I was ecstatic and so ready for the upcoming adventures! Then, I started packing for Canada where we filmed Kim Possible for three months!”

The film is a live-action adaptation of the original classic cartoon series from the mid-2000s. Describing the movie, Ciara says, “It’s a comedic, sci-fi action adventure film about a teen hero who is balancing saving the world from dangerous villains with the challenges that come with being a normal high school girl.”

Taking pride in her work, and showing her love for the original television show as well, Ciara explains that the film pays tribute to the series with “the same lovable characters, comedic style, and classic fight scenes.” There are plenty of one-liners placed throughout the film that if fans listen closely, they will be able to recognize the callbacks and references.

“However, one large difference is actually my character Athena. Athena wasn’t in the original cartoon series and is a new addition to the world of Kim Possible.” She adds, “We also updated Kim’s gadgets to be more modern – like switching her classic pager to a futuristic holographic necklace.”

She takes in the concerns that fans of the original ‘Kim Possible’ series may have had about her character and assures that they won’t be put off by her addition. Her understanding as both a fan of the television show and the actress behind Athena gives comfort to anyone who might still have lasting concerns.

This movie has amazing lessons in friendship that are important for everyone to learn.

“There are definitely a lot of original fans who were skeptical of Athena, but I think she brings an important dynamic to Team Possible,” Ciara says. “With Athena, the new generation also has a character they can hold onto as their own. Athena brings together both generations to enjoy the inspiring story of Kim Possible.”

Athena is a lovable goofball who is the ultimate fan of Kim Possible, according to the actress. “In the movie, she is having a tough first day of high school and Kim and Ron take her under their wing. She soon becomes the newest member of Team Possible and is fiercely determined to help her new best friends on their exciting missions.”

Comparing herself to her character, Ciara says, “Athena and I are very similar in a sense that we are goofy, passionate, and love to make puns.” She can’t help but excitedly mention that Athena makes some “hilarious puns” throughout the film. “I can also definitely relate to Athena when she fangirls over Kim Possible. I’ve met some celebrities and totally freaked out!” As for their differences? “Athena has many facets to her personality, some of which differ from me.” She leaves no spoilers though, simply stating that you have to watch the movie to find them all out.

One major concern that fans had regarding the introduction of Athena to the Kim Possible universe was how she would affect the beloved dynamic between Kim and Ron. She acknowledges this as she says, “Adding a member to a duo of close-knit friends can often create some issues.”

As for how this plays out in the film, she explains, “Athena starts to eclipse Kim and an element of jealousy begins to arise between the two. Ron, being the incredible friend he always is, helps Kim find herself again and shows her and Athena the true meaning of friendship.”

Ciara enthuses, “This movie has amazing lessons in friendship that are important for everyone to learn. I think everyone will love what Athena brings to Team Possible.” Even at their lowest points, the friendships between the characters are what keeps them close and motivates them. And if audiences shed a tear or two at these instances, then it means a job well done.

For anyone who still hasn’t seen the film and is on the fence about it, Ciara has a few more enticing points. “Fans of the original series can look forward to special appearances by the amazing voice actors from the ‘Kim Possible’ cartoon! Christy Carlson Romano, the original voice of Kim Possible, plays the fun character of Poppy Blu,” she reveals. This scene in particular has a lot of nudging for fans of both incarnations as it throws in quite a few jokes and references. “Patton Oswalt plays the live action version of his character, Professor Dementor.” If his highly entertaining opening scene isn’t enough, Ciara pulls out one more stop. “We also bring back Kim’s favorite hangout spot Bueno Nacho, all of her classic fighting gadgets like the grappling hook, and everyone’s favorite naked mole rat – Rufus!”

It was a once-in-a-lifetime moment that I never thought I’d get to experience.

The fun that takes place on-screen easily translated off. Close bonds and friendships were formed between the actors while on- and off-set.

“A favorite memory on set was the one day I had a bet with Alyson Hannigan and Connie Ray, who play Kim’s mom and Nana Possible [respectively], that I wouldn’t be able to sleep a full night in my Athena director’s chair. Long story short, I proved them wrong, filmed the whole thing for proof, and won the bet for $200!” She adds, teasingly, “By the way, my neck still hurts…”

Thankfully, her “neck pain” has nothing to do with any of the stunts she was performed for the film. Precautions and training helped achieve what audiences see on screen in a safe manner.

“Sadie and I flew out to Vancouver a month before filming to primarily work on stunt rehearsals,” Ciara says. “We learned hand-to-hand combat, action rolls, and harness work. My favorite was the Bo staff, Athena’s specialty in the movie. It has a lot of versatility, was so fun to learn, and,” she jokes, “now I have an insanely cool party trick if anyone has a Swiffer Duster lying around.”

Ciara had an edge when it came to learning the fight choreography, all thanks to her dance background.

“Fight choreography is very similar to dance because you are working with a partner and have to do the movements exactly the same each time or someone could get hurt. Being a professional dancer helped so much in learning the stunts.” She explains, “My dance training was useful when it came to stamina, core strength, and body awareness needed in the fight scenes.”

Her dance background could come in handy too if she ever found herself on a secret mission like Kim Possible. She even has a unique choice as to who her side-kick would be. 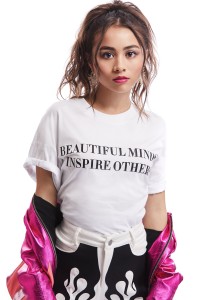 “If I were to go on a secret KP mission, I would want my side-kick to be a combination of Donkey from Shrek and Rufus from Kim Possible. Donkey is incredibly funny and has a positive attitude so we would have so much fun. Rufus is super smart and adorable as well!” Ciara’s tech to help her along the way would be really cool too. “My go-to gadget would be a Swiss Army Knife-like, high-tech tool that could morph into whatever you need to save the day!”

What about if Ciara ever found herself in the world of another Disney Channel Original Movie?

“Fun fact: Sadie and I watched the latest DCOM Zombies during filming in Vancouver and we’re obsessed,” she confesses. “It was actually just announced that they are making a Zombies 2! I’d love to make an appearance in that sequel or possibly have an epic Kim Possible/Zombies crossover movie.”

While Teenplicity is definitely hoping for that to happen, everyone will just have to wait and see. Until then, Ciara has a lot of exciting things for fans to look forward to in 2019!

There is much to come for Ciara in her future, that is no doubt. Her talent, which continues to grow, will lead to her continued success. Some of the success she already acquired is still hard for her to grasp still, even as she recalls the moment she saw the Kim Possible trailer in Times Square.

“I was actually just exploring New York with a friend when I saw the Kim Possible video flash up on the jumbotron!” the actress exclaims. “It was so surreal. We camped out in the perfect spot and watched it at least seven more times. It was a once-in-a-lifetime moment that I never thought I’d get to experience.”

Kim Possible is available to watch on the Disney Channel website and DisneyNOW app.