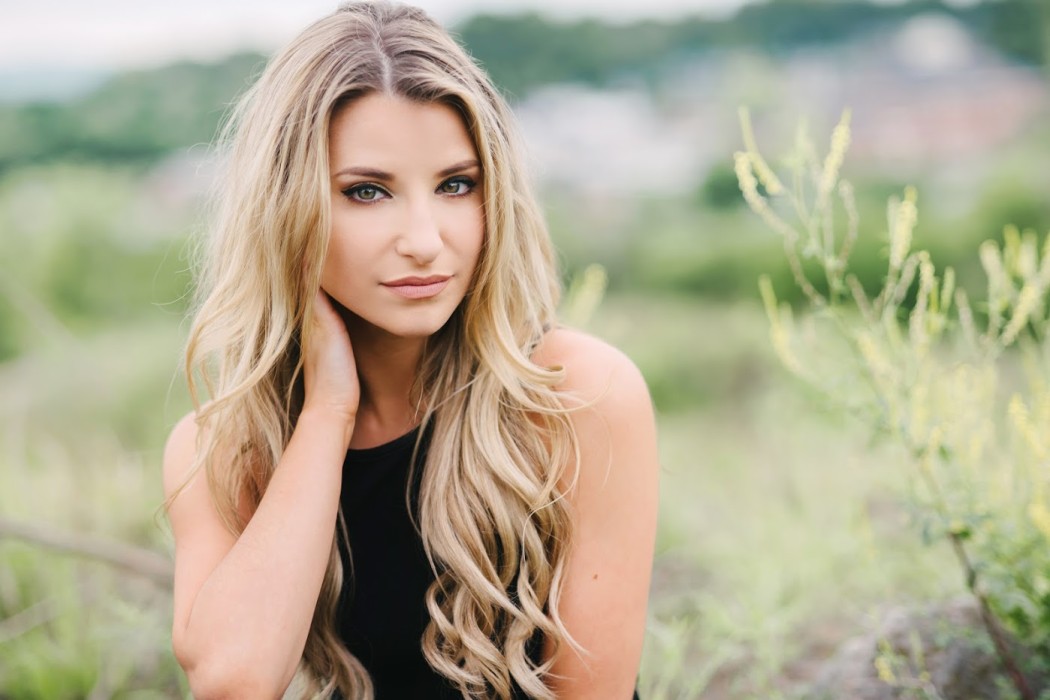 Some of the best surprises in life come in the most unexpected packages. A quick glance at country singer April Kry, one would assume that a small, quiet voice would accompany her short stature. Standing at just under five feet, her voice soars higher than one could even begin to imagine.

Like the tiny but mighty talents of fellow country stars Miranda Lambert and Carrie Underwood, April’s voice transcends any thoughts of her appearance and blows listeners away with its strength and range. The confidence she exudes in every lyric, whether she’s playing a country song or a Top 40 pop hit, builds on the foundation that April has built for herself in the music industry.

On the heels of the release of her latest single “While We’re Young”, April is riding a high of joy and excitement. Fans are enthusing over the new song and are loudly proclaiming their praises for it all over social media.

The story of “While We’re Young” is about two teenagers who just want to be together no matter the circumstance, according to April. She says, “[The song] takes the listener on a ride. It’s very young, fun and gives the feeling of nostalgia. The melodic mandolin line is upbeat and just overall gives the listener a ‘happy’ vibe!”

“While We’re Young” expresses the idea of living in the moment and enjoying life to its fullest as it follows this young couple around on an evening under the stars. April states to Teenplicity, “You hit the nail on the head.” She goes on to say, “We wanted to tell a love story while also spreading a general message of living life to the fullest.”

The talented singer cannot help but exclaim, “The recording process was so much fun! Stephanie Bentley, who is a co-writer on this,” April begins to explain before mentioning that Stephanie also wrote “Breathe” for Faith Hill and “Concrete Angel” for Martina McBride – two artists she absolutely adores and looks up to. “NO BIG DEAL,” she expresses in all caps. “I recorded some of it at Blackbird Studios, and some of the instruments were tracked at Black River!” says April of the process to create her single. “Everything came together so quickly and it was such an amazing experience.”

Having recently released a video of her performing acoustic version of “While We’re Young” for fans to sing their hearts out to, April dished that plans are in the works to shoot a music video for the song next month. “I’m so thrilled!” she enthuses.

“I’m so fortunate to be able to work with James King on [the music video], and we are in the planning stages right now.” She teases, “All I will say is that it’s going to feel more like a movie than a music video. We really want to tell the story of the song, so there will be a pretty thought out storyline.”

April’s last music video was for her song “Get Ready To Miss Me” in which a fellow country artist – budding talent Tegan Marie – plays a younger version of April, holding different CDs and listening to music while April takes on the personas of these legendary artists. Thinking of the video, April cannot help but gush over Tegan for a moment, exclaiming her love for the young artist. “I’m so glad she got to be a part of that video,” she says. 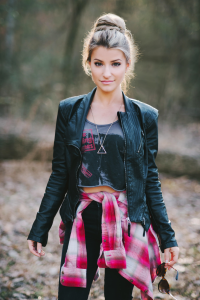 Some of the artists that April takes on in the video are actually musicians that she’s big fans of and looks up. She says, “I draw small things from each artist. For instance – with Martina, it’s her passion when she sings. With Faith, it’s some subtle vocal nuances, and with Shania, it’s her stage presence and ability to take risks with her music when no one else was.”

Having been a fan of them for years, it’s easy to spot these influences in the way April performs each song or takes center stage for a music video. Yet, she’s able to put her own personal twist on it and allow her wonderfully bright and charismatic personality to shine through.

It makes sense when one realizes that music has always been a very big part of April’s life. Singing since she was five and growing up with her father as a worship leader in church, it seems only natural that she would pick up an instrument too. If only learning it came that easily, as she tried another instrument before moving to guitar.

“I actually didn’t want to play guitar at first. I originally tried to learn the piano and failed miserably at that,” she reveals with a laugh. “So I picked up the guitar and it came a little more natural to me. It’s been really helpful just [to know] the basic chords when I’m writing. It’s something I’m continuing to teach myself and will always strive to get better at!”

Maybe April’s ever-growing guitar skills will aid her when it comes to the fiddle, which she states as an instrument she would love to learn. “I just think that would be so cool!” she says excitedly.

With her family still involved with church and her faith remaining an important aspect in her life, April says it is a definite that her faith influences her music.

“It honestly helps me stay inspired in my down times,” she says of her faith in God. “I will go through seasons where I just feel stagnant, and even then, I hold fast knowing that His plans are so much bigger than mine!”

She even credits her faith with helping her navigate the unpredictable music industry. “Knowing that God gave me this voice for a reason gives me so much peace. Sometimes I feel like, ‘If I’m not in control of everything it’s going to fall apart.’ That’s when God steps in and goes, ‘Nope. I can take it from here!’” April expresses.

It is because of some of the amazing opportunities that have been presented before her that April has been able to meet one of her idols.

“I actually got the opportunity to meet Martina McBride a couple years ago at the ACM Awards,” she reveals. “I knew she had heard me sing a cover of her song, ‘A Broken Wing’ when I performed it on the Highway Morning Show, so I was really nervous. She said she loved my cover and was just so sweet. I really don’t remember anything past that…” April admits before laughing. “I think I was so overwhelmed with the notion of meeting her!”

In the future, she hopes to meet John Mayer and collaborate with him in some way. “I think he is a musical genius,” she states.

Much like her idols, and nearly everyone else in the world, April’s music tastes have evolved since she first started singing at five. “I think everyone’s tastes evolve over time. Especially as an artist, I am always listening to new music and continually trying to find my sound and grow.”

She thinks back on her music taste over the years. “I remember listening to artists like Joy Williams before she was in The Civil Wars, and Jaci Velasquez. I was mostly just allowed to listen to Christian music growing up so these were the artists I loved when I was really young,” April recalls. “It has gone from that to my boy band phase, to John Mayer, Colbie Caillat, Martina McBride, and now artists like Seth Ennis, Lauren Alaina, Mickey Guyton, and all these incredible new and upcoming artists!”

With so many different artists coming through her headphones, Teenplicity couldn’t help but ask April for the similarities and differences between the music she listens to and the music she creates.

“I love taking small things from different songs and artists I listen to and incorporating it into the music I write and play, but overall I would say I have my own thing going on musically, and I am continuing to build upon that and grow as a songwriter and performer so it’s ever-changing!”

Her growth as an artist has been incredible. April states that she believes she’s grown leaps and bounds mentally, spiritually, and musically. “I’ve learned not to take myself so seriously, and that I can make mistakes sometimes.” She reveals that she used to get so down on herself in the studio that she wouldn’t be able to even finish recording a song. “I look back and cringe, but you know what?” April says, “I wouldn’t be as strong as I am today if I didn’t have those mountains to climb.”

This is one of the most surprising things that April realized about herself as she has continued to work on music.

“I had more fire in me than I thought, and more guts than I gave myself credit for.”

It took a lot of guts for April to really take her music seriously and perform at the legendary Apollo Theater in New York, a memory that she will never forget. “If you don’t know what that is, well,” she begins to explain, “if the audience doesn’t like you, they will boo you off of the stage.” Without a doubt, April hadn’t need to worry about that at all. “After the first couple of lines, I got a standing ovation and it was such a thrilling experience to say the least.”

As she continues to move forward with her career and gather more ears to take in her music, April hopes that her songs will do the same for listeners that music did for her. “Music had a way of helping me through a lot of rough times in my life. I hope I can do the same for you,” she says, addressing fans and potential listeners alike. “Whether you’re in a place of sadness, or pain, happiness, or joy… I want my music to meet you where you are and touch you.”

In hopes that “While We’re Young” will leave listeners entertained and enjoying her music, April promises more is on the way in 2017. “I’m working on an EP to be released a little later this year and I will be performing more too!” she dishes.

Teenplicity absolutely loves April’s song “While We’re Young”! It makes us want to go on a drive, blast the song, and sing at the top of our lungs, so we had to ask what three songs give her that same feeling?

April’s song “While We’re Young” is available on iTunes now!

Monday Musings: The Women-Led Shows That Shaped TV and Society