There are no dramatics at play when discussing the overwhelming talent that Gillian Heidi possesses. At just sixteen, her incredible voice and equally intimate lyrics outshines those with years more of experience.

Listening to her latest single “static” is a perfect example of that. Through lyrics from “Pulling beneath the surface / you’re leaving me there to drown” to “You think I’m making it up / it’s all in my head / I’m just being overdramatic” she has a pinpoint accuracy of dissecting the emotions a person experiences when dealing with social anxiety and the muddled thoughts running through their head as they confront it.

One of the lines that sticks out for how it rings true is “It’s 1:33, I’m finally home / feeling emptier than I was before.” The other comes when she asks, “Why did I let them lure me out tonight?” – a regretful thought that many experience when dealing with their social anxiety. It’s a vulnerable tour through one’s mind in the midst of panic.

“‘static’ is a melancholy song about not wanting to go out, but also not wanting to miss out on a fun experience,” describes Gillian. She reveals, “I actually wrote ‘static’ right before going out, and it follows me throughout a night of going out. The song is based on the story and its specific visuals.” 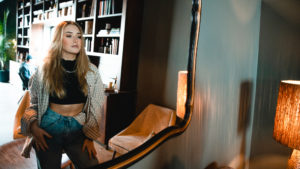 Throughout the song, she sings of not wanting to be out and feeling like she could just fade into the static, willing time to pass her by until she can go home. She details the war happening inside her head as she deals with the two conflicting parts of her brain, pulling out details through the fog within her mind. She hauntingly notes how she hates seeing the way her eyes are “no longer bright” after an exhaustive night like this.

When asked how she hopes the song resonates with listeners, Gillian says, “I think that ‘static’ really means a lot to me because of its unique story. I had never really heard a song about the social anxiety that comes with going out that resonated with me. I hope that listeners are able to relate to ‘static’ and feel less alone in their struggle.”

There is no perfect song, and I will always be able to get better, as long as I keep trying and pushing myself.

It is refreshing to feel someone so perfectly understand the inner struggle. Gillian’s favorite lyric from the song is “Electric sky, mind like a highway,” and it is an excellent illustration of how one sees their mind as they go through these struggles. It just adds to how easily one can picture this exact night playing out in their own lives, trying to swallow their anxiety and have a night out with friends, despite the fighting within one’s head.

“I think that when I write from a place of vulnerability, not only do my songs turn out better, but I’ve found that people can more easily relate to them,” she expresses. “Also, my favorite songs are always vulnerable and display a deep part of an artist’s mind. I think that vulnerability in songs helps to connect the artist with their listeners.”

‘static’ is one of the first songs off of Gillian’s upcoming album 3AM. “‘static’ is definitely the most pop-influenced song on 3AM. The rest of the album is a little darker and more indie-pop,” she says. “3AM is dark and each song has its unique space on the album,” the singer continues, detailing what fans can expect from the album.

“I think that the album is very well-rounded and I’m super proud of it. The order of the album is also very intentional, and I put a lot of time into it.” 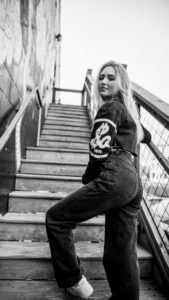 Gillian has also put an immense amount of time into music and honing her craft. Having been involved with music as a singer for as long as she can remember, she says of her childhood, “My parents would know that I was awake by hearing me singing though the baby monitor!” It took a little bit more time, and learning a few more words, before she started to consider music as something she could cultivate and nurture.

“I started really pursuing music as my passion when my brother started playing the piano. He inspired me to start playing music, and he still inspires my music every single day,” the singer says. Yet, music still wasn’t considered to be an option as a serious career path for her. “Music has always been so important to me, but I never saw it as a possible career path until recently,” Gillian says.

“When I recorded my first EP, unfiltered, I did it completely for fun,” she reveals. “When ‘What It Felt Like’ gained a lot of traction, I decided to start taking my music more seriously. From there, I recorded my upcoming album and I can’t wait for more exciting things to come in the future.”

Learning piano after being inspired by her brother has helped Gillian grow as an artist, especially once she considered music as a serious future. She has since also picked up the guitar, using both instruments when it comes to her songwriting. “I think that my ability to play multiple instruments has helped my creativity and writing flourish and improve so much. I have been able to shape the feel of my songs by using background instrumentals,” she says of how being able to play instruments have aided her creativity as an artist. “I also think that, when you’re a musician, it’s very important to be able to play an instrument that will keep you inspired.”

It helps that ever since she was little, Gillian has looked up to Taylor Swift. As one of the most successful artists in music, the former country starlet has crossed genres and excelled in storytelling in her songs, something that Gillian seems to have taken note of and exhibited throughout ‘static’. Much like Taylor has constantly worked hard to improve on what she’s done in the past no matter how successful she gets, Gillian is doing the same.

Streams and numbers aren’t very important to me; I just hope that people are able to find therapy within my music.

“I’ve learned recently that I will constantly be able to improve,” she says of what she’s learned about her craft. “There is no perfect song, and I will always be able to get better, as long as I keep trying and pushing myself.”

Part of that push comes from working hard to do well in her career as well as when it comes to finishing schooling. “Sometimes it is difficult to balance because school is very important to me. I really value my education, and I take it seriously.” The singer continues, “Music and school are very different and separate parts of my life and myself, which can be tough.” However, she is constantly learning and adjusting to what she needs to do to be at her best.

“Honestly, I think the biggest thing I’ve learned over the past year is that caring what other people think is a complete waste of time,” Gillian says. “I used to care so much about what everyone thought about me, but I’m now surrounded by people who will love me regardless of what color my hair is or what brand of dress I’m wearing.” If she ever struggles with this, she can always look to her inspiration Taylor Swift who famously had to work through this in the public eye.

Taylor isn’t the only artist that inspires Gillian. “Recently I’ve been loving Kali Uchis, Ella Mai, Summer Walker, and Doja Cat. I love R&B and I’ve recently been trying to implement more R&B into my writing.” She also hopes to incorporate another genre she loves into her music in the future – rap. “My dream collaborators would be Nicki Minaj, Tyler, the Creator, or Aminé,” she says. “I look up to all three of these artists for different reasons, and I’ve always loved rap and R&B and hoped to feature some more of it in my music.”

Perhaps doing those collaborations could be a goal she can accomplish within the next five years, as anything is possible. However, fame and success in the traditional sense isn’t what she hopes to cross off her to-do list. “I hope that I’ll be in college, and I hope that my music has helped people,” she shares. “Streams and numbers aren’t very important to me; I just hope that people are able to find therapy within my music.”

Gillian is already seeing the impacts of her music throughout her growing fan base, with their supportive comments and enthusiastic adoration of her music. “Thank you. You are all so wonderful!” she says to her passionate fans. She also shares with them a piece of advice. “Don’t care what people think or say about you. The people who are meant to be in your life will love you unconditionally. I love each and every one of you.”

Be sure to check out Gillian Heidi’s song ‘static’ here!

She Is… Nicole Alyse Nelson

Breakout Nickelodeon star, Nicole Alyse Nelson talks “I Am Frankie” and the season finale shocker that have fans sitting on the edge of their…