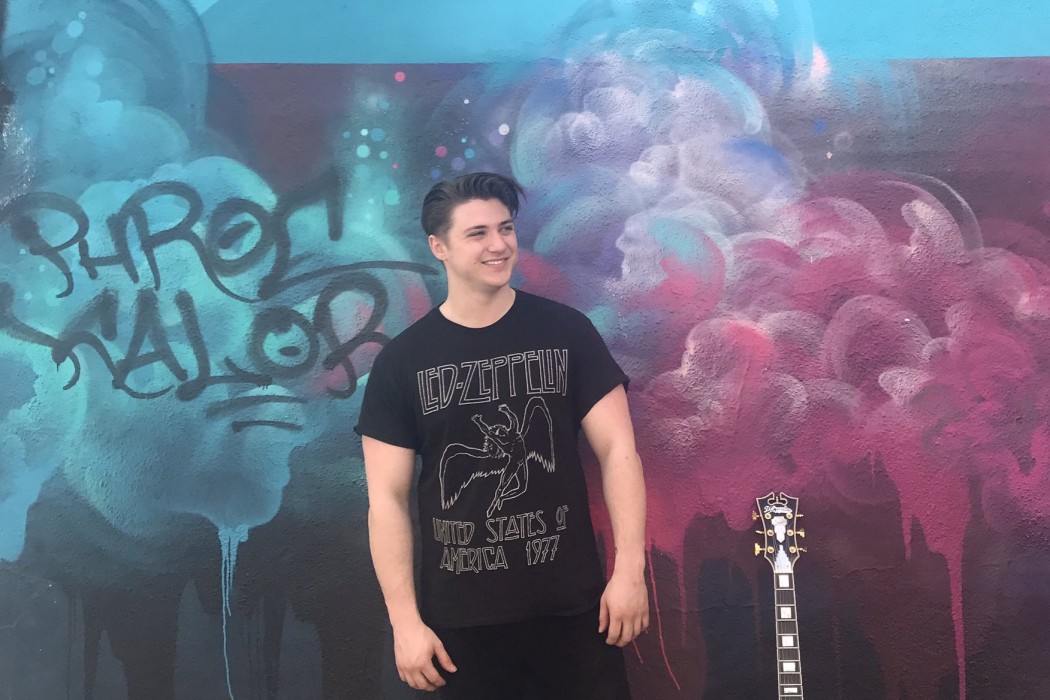 For artists on the rise, a unique sound to set themselves apart from the crowd is a near requirement now. Boston native Joe Dias can easily scratch that off of his list with his new single “Something Better”.

Explaining the tale of regret and sorrow after leaving someone, the new single creates a blend of pop, rock, and EDM seamlessly and makes the hip-hop piece in the bridge fit naturally.

“I was trying to blend a bunch of popular genres that I personally love into one unique sound,” the singer says of “Something Better”. His love of rock, the foundation of which comes from even before he began playing guitar, is what allowed him to write the song at first. The idea of incorporating elements from some of his favorite genres came at the time of production.

The idea behind the song originates from a relationship, Joe reveals. “But the song’s taken on a whole new meaning for me since I’ve moved out to [Los Angeles], away from Boston,” he says, adding that his family still lives there. “So it’s kind of a lot of different things to me now.”  The singer hopes that the multitude of relatability for the song will extend to his fans as well.

“You never know what you have until it’s gone, whether it’s a relationship, a situation – anything.” He explains that he was trying to be universal enough that people can interpret the song in their own way. “I just try to hit on a bunch of different ways to try and represent that in the song.”

From lines like, “You never know / what you’re letting go / until you let it go / in search of something better” and “Should have stayed on my own green grass”, Joe gives a sort of twist on common sayings, almost breathing new life into them. Leaving it vague yet hitting exactly the right tones of regret allows listeners to apply the song to their own experiences.

Joe says that he hopes “Something Better” encourages his fans. “I hope it lets people open their eyes and appreciate what they have.” While he hopes that it is a learning lesson for them, he also wishes that they can enjoy the song and feel good when they listen to it.

“Something Better” is just the beginning of Joe’s new music. He credits moving away from family to Los Angeles as enhancing his creativity. “I’ve got more to write about now,” he says, laughing when he explains, “[I realize] how hard it is.”

Recalling when his career was just starting out a few years back, Joe admits that he was just playing straight rock music. “Now it’s kind of like a mainstream mix of all of the other avenues I’ve went down,” he says. The growth and mix of all these styles is on display throughout his new single. Hopefully this transition would make it easier to collaborate with The Weeknd or Kanye – two artists that Joe decided he’d love to work with. “It’d be interesting!” he exclaims when discussing how his sounds would play off of the music by the aforementioned artists.

Diving deeper into his career, Joe expresses that he wants to bring back live instruments and artists that write their own songs. He says he wants to be the person writing and producing their own stuff and being able to be on a mainstream level.

One goal he hopes to reach as he moves forward is reaching Billboard success. He adds with a laugh, “And be able to live comfortably on music. That would be really nice.” However, at the heart of Joe’s dreams and his music is the fact his wants to be positive. “I want to spread a message of positivity,” he expresses wholeheartedly.

As if the passion for what he does couldn’t get any higher, the mention of his mentoring at the School of Rock in Los Angeles raises the bar even more.

“The best feeling ever,” is the immediate thought that Joe expresses when asked what it is like to mentor there. The love for what he does is obvious as he explains the wonderful feeling behind the kids he works with. “I went to the School of Rock in Boston so now that I’m teaching kids – once they get into it, like when they get all happy and they finally learn something, it reminds me of me when I was young. If I didn’t have that, I probably never would have pursued my dreams. It’s like passing the torch so it’s pretty cool!” He is hoping that the kids find success with their music and that they remember him mentoring them as he remembers his old guitar teacher who is in a band. “It’s crazy. I’m like, ‘He taught me!!’” Teenplicity has no doubt that his students will be saying the same one day.

As Joe continues to work on his personal music career, he reflects that moving out and being so far away from family has been the most difficult part. “But it all pays off,” he concedes. “I really can appreciate them more.”

Earlier this year, Joe even posted a song to his YouTube channel which he dedicated to his mother. “I’m a very, very closed off kind of person in real life so when it comes to music, I use that as my escape – my way of therapy almost,” says the singer. “That’s when I can be vulnerable and talk about the things that really mean a lot to me.” Outside of his music, Joe insists that he is a happy guy, smiling all the time, which is obvious by even the sound of his voice.

Not only does Joe bring a part of himself, otherwise kept away, to his music but he also brings a part of himself when it comes to giving back. He told the Lynnfield Villager last year that he didn’t want to wait to be famous to do good, which is why he had planned a tribute concert last year where all proceeds would be donated to the Children’s Activity room in Massachusetts General Hospital in Boston in honor of his sister Gianna.

“I really just want people to know that there’s a lot of families that go through a lot of tragedy in the hospital. Mine was one of them back when I was younger,” he says, thinking of his sister, “and some people just can’t really afford it as well, some people don’t have that much. I want to be able to give back to kids in the hospital as well too because for those kids, the only thing they have is just that little toy room.” Joe goes on to explain his hopes for the future. “My goal is to just raise a bunch of money at concerts and buy a bunch of musical instruments and toys.” As his work goes on to bigger and better things, he hopes to put what is raised directly to the kids, “Not just research, but help increase their day to day activity.”

The singer even once said he hopes it’s like their own Disneyland in there. “It’d be really, really amazing if they can [get something like that]. I want to do everything I can to reach that.”

In fact, his sister had been the main pushing factor into Joe’s career moving into motion. While she was a patient at MGH, she would ask him to send her videos of him singing. She had ultimately convinced him to put his music on YouTube.

“[Gianna would] probably say, ‘Keep going. Don’t slow down, don’t hold back. Be yourself,’” he says of his sister. “She’d probably be happy with what I’ve done but there’s a whole lot more that I can do before I’m really happy. I’m not satisfied just yet.”

Over the course of his career thus far, Joe has learned that he doesn’t like to be alone, he admitted with a laugh. “I’ve learned I love to connect with people whether it’s through music or hanging out. If I’m not making someone smile or laugh, I’m not quite as happy. That’s why I do music too, because I always want to be engaging with people and sharing the way I feel about music. All I want to do is help people, connect with people, make people smile. When I’m not doing that, I feel like I’m not doing myself right.”

His connections to people are so genuine that the hoard of fans he’s gathered are, according to Joe himself, really, really awesome.

“The fans that I have are so dedicated,” he says. Their messages keep him going when he’s feeling down on himself too. “That’s the driving force that keeps me going. It means the world to me – it’s a crazy feeling.”

The love they have for Joe shows through in all that they do. One particular fan experience has left a mark in his heart. “In Boston, there was a girl that brought a poster to the show that said, ‘Fly High Gianna’ that had tons of pictures of me and [Gianna] on it. That was probably the greatest fan experience I’ve had.” He even cites the moment as beautiful.

For his fans, Joe is excited to say that he has some live concerts and more music coming this year. “I want to work on a new album or new EP, something of that nature,” he teases. Joe adds that he wants to try pushing out newer sounds. “Better sounds,” he continues, “and try to expand the reach of my music and what we can do.”

Be sure to get his new single “Something Better” on iTunes now!

Check out Part 1 of our Free2Luv feature with Stephanie Gonzalez, Laya DeLeon Hayes, and LoveSea here. In 2011, Free2Luv came into fruition as…