Young actor and philanthropist Jet Jurgensmeyer describes his experiences in working on Hey Arnold! The Jungle Movie and Ferdinand before their premieres this winter.

If one had to pick a notable aspect of Jet Jurgensmeyer’s resume, it is that he will be called upon to fill large shoes for a role and he will deliver to make it his own. Recently, he starred in a remake of Adventures in Babysitting on Disney Channel and a reimagining of Legends of the Hidden Temple, based on the Nickelodeon show of the same name. With these films, Jet has begun to cement his mark across audiences.

The excitement that follows his next two projects is contagious as fans will get to see him take on another iconic role in one and help originate another.

First, viewers will be able to experience Jet take on Stinky Peterson in Hey Arnold! The Jungle Movie when it premieres on Thursday, November 23rd. The two-part TV film will serve as a finale to the series, answering questions that fans have had for years.

Working with the rest of the cast that came back was just really special to me.

“It pretty much picks up where it left off when the series ended and explains what happens to Arnold’s parents,” explains Jet of the movie.

Portraying Stinky in the film, he describes his character as funny as always. “I’m not sure he knows he is funny,” he goes on to contemplate. “He is just being himself. He always ends up saying something comical.”

Jet offers some relief to those who worry the time between the series ending and the television film has made the characters unrecognizable as he confirms his character is pretty much the “same old Stinky Peterson”. It was also pretty natural for him to step into the shoes of Stinky. “Well, I am from Nashville, Tennessee, so I guess both of us being southern boys would be what I relate to most,” he says of him and his character. “Stinky is pretty laid back and I think I am too.”

Both projects had the most fun people to work with. I feel really lucky to be involved in both.

The common background of southern roots also made it easy for Jet to slip into that familiar voice that people relate Stinky to. “It really wasn’t that hard for me,” the actor says of adding a more southern drawl to his voice. “[It is] pretty normal for me to hear. When I need to, I can always talk a little more southern.”

Loving the fact that he was asked to step in and be part of something so iconic, Jet can’t help but gush, “The creator, Craig Bartlett, was the best. Working with the rest of the cast that came back was just really special to me.” Fans will also find it incredibly special. A fan himself, the actor admits that he was curious about Arnold’s parents as well. “I watched a bunch of episodes when I got the part,” he explains. “I’m so excited that Nickelodeon decided to bring back ‘Hey Arnold!’ for this movie. The fans really loved it in the 90’s and I think they will really love the movie.” 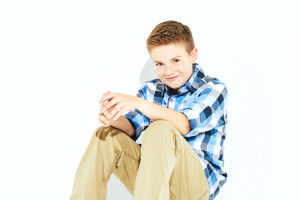 On December 15th, Jet will be able to be heard in 20th Century Fox’s new film Ferdinand. The movie follows a bull who has been taken from his home and must escape his captors to return to his family. Taking on the role of Young Guapo – Peyton Manning’s counterpart – Jet reveals that he flipped out when he heard he was playing Young Guapo. “I’ve always been a really big fan of his,” he gushes. Going on to speak of his character, he says, “I think Young Guapo is full of energy and excitement. He seems like a young kid to me that wants to have fun. He is one of the nice young bulls.”

Comparing his experience on both films, Jet reveals that while working on Hey Arnold! The Jungle Movie, a bunch of the cast would record together in the same room. “That was a lot of fun,” he recalls. “When you do voiceover, you don’t get to do that too often.” A perfect example of that was when he recorded for Ferdinand – it was just himself and the director in the studio.

If I can go in there and help make them forget about what they are going through and maybe put a smile on their face for a little while, then it makes it all worth it

“The producers and engineer were all there,” he says. Despite the difference atmospheres, he really enjoyed working on Ferdinand also. “It was just as much fun but different!” exclaims the actor.

“Both projects had the most fun people to work with. I feel really lucky to be involved in both.”

When Jet is not spending his time in the recording booth or in front of the camera, he dedicates his passion to helping others. After his publicist set up his first visit to the Seacrest Studios, he fell in love with the place and the Ryan Seacrest Foundation. “I love what they do and everyone that works with them,” dishes Jet.

His positive experience encouraged him to keep visiting more of their locations around the country. “That’s why I did my fundraiser for them,” confesses the actor and philanthropist. “My goal is to go to all of the Seacrest Studios and visit.” 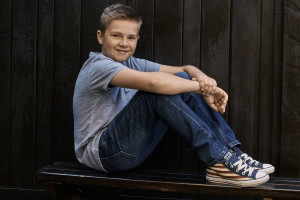 His work with the foundation has shown him that there are some very brace people in the world. “You know we all get up and have bad days sometimes. These kids and their familiars are dealing with something that’s so much bigger than you can imagine,” he expresses.

“If I can go in there and help make them forget about what they are going through and maybe put a smile on their face for a little while, then it makes it all worth it,” says the young star. “I get such a good feeling every time I go for a visit.”

Between visits, Jet spills that he will be going into the studio to record new music. “That will be a lot of fun and I will have something for you to hear really soon!” he exclaims. “I also joined the cast of the animated show ‘Stinky & Dirty’ for Amazon.” With the promise of it being available in the near future, fans have a lot to look forward to in the coming months.

***Above photo credit to the Rikers Brothers.