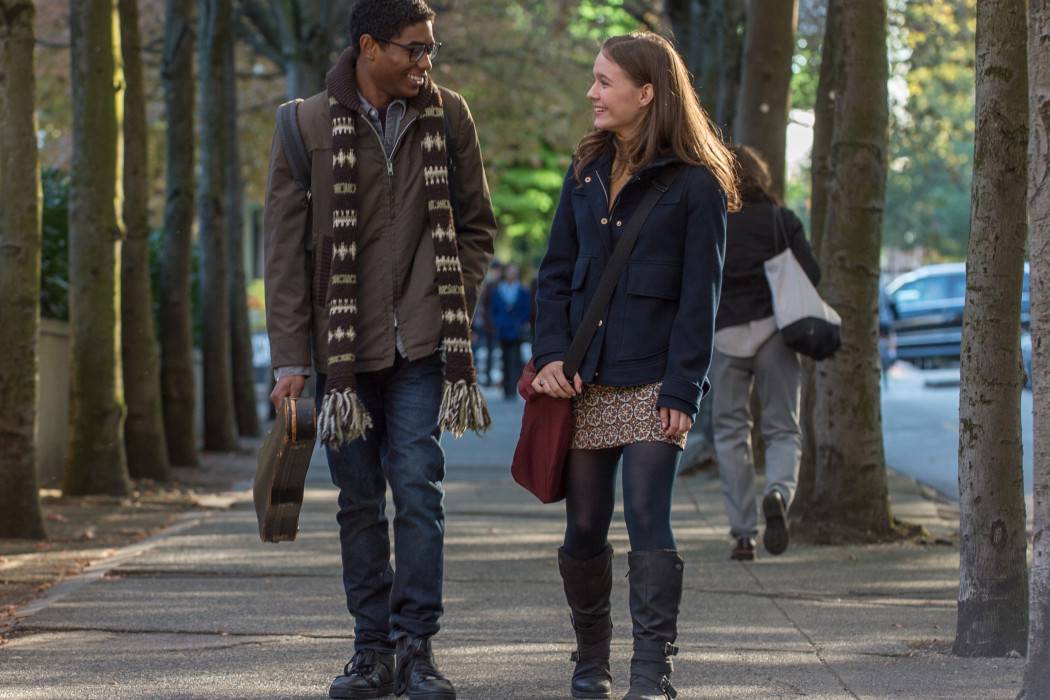 Read our review of Wonder here.

At sixteen years old, Izabela Vidovic has lived quite a few lives…through characters of course. From the post-apocalyptic teen drama The 100 to the contemporary family drama The Fosters and more recently as young Supergirl herself, Kara Danvers on the superhero show Supergirl, Izabela has gotten to be apart a number of stories about the different ways that life can be looked at. (And these are just a few of the roles she’s done.) Now, viewers get to see her in another role about life and the role that we all have in it through the book to movie adaptation of Wonder.

Based on the best selling book of the same name written by R.J. Palacio, Wonder is about 10-year-old Auggie Pullman (Jacob Tremblay) who was born with extreme facial differences and not expected to survive. Because of this, Auggie is homeschooled by his mother (Julia Roberts) until the fifth grade. Sending “a lamb to the slaughter,” as his dad (played by Owen Wilson) puts it, Auggie wishes only to blend in, or at least make friends but is met instead with isolation, taunts, and hurtful comments, most of which come from his affluent classmate Julian.

[Via] wholeheartedly understands Auggie’s needs and even sacrifices her own for him. 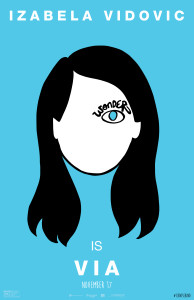 In Wonder, Izabela plays the role of Via: Auggie’s older sister. At the start of the movie, she’s a shy girl entering high school and carrying the weight of the world on her shoulders to help make life easier for her family. “What drew me to Via’s character was her unconditional love for her brother,” Izabela explains how she knew she wanted to play the character. “She wholeheartedly understands Auggie’s needs and even sacrifices her own for him. Being an older sister myself, I found this to be incredibly touching.”

“The biggest similarity between Via and I is a need for expression through the arts. Entering high school, Via discovers her passion for drama and performance, realizing she can really come into her own,” she says. Izabela acknowledges the biggest difference between her and Via is the circumstances of their situations, “While I also have a younger sibling, Via’s situation is much different than mine. She grows up living in her brother’s shadow, a brother who requires much more attention than the average kid.”

For Via, giving Auggie attention means making sure that he is doing okay and getting to live the life that he wants. “The scene I found most challenging was the one where Via talks to an emotional Auggie in his bedroom to convince him to go trick or treating with her.” Izabela acknowledges the levels and complexities of the scene which required her to play Via as a sister being sympathetic and understanding of Auggie’s feelings while also being honest and realistic.

I bring up that the relationship between Via and Auggie is one my favorite dynamics in the film because of how strong their bond is. “I feel that Jake and I wanted to show the level of comfort that exists between Auggie and Via. Via is candid with Auggie and doesn’t treat him any differently because she sees him for who he is,” Izabela says about what she and Jacob found to be the most important part of their relationship to portray. “They’re siblings and so their love for each other is oftentimes unspoken,” she adds.

I hope Via shows viewers that you don’t have to live in someone’s shadow to express your love and understanding for them. 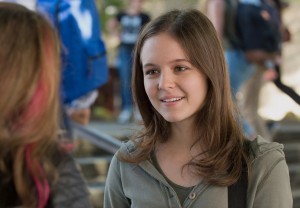 “Via’s interactions with the different people around her helped me better understand her a person,” Izabela begins about how the dynamics Via has with other people contributed to the way she interpreted the character. At the start of the movie, Via and her best friend Miranda have grown apart over the summer leaving Via feeling lonely in this new space now that she’s lost what Izabela explains as an outlet for her, “Miranda was one of the only people in her life (besides her grandmother) who really looked at Via and understood her. Miranda is, incidentally, the person who put Via onstage and shows everyone how great she is.”

“On the other hand, Via’s relationship with Justin is very sweet. He brings out a different side to her, urging her to allow herself to shine,” Izabela explains why Via falls for Justin when they first meet outside the drama club. “Similarly, I approach the relationships in my life depending on the individual—I appreciate each person in my life for different reasons,” she adds.

[Wonder] touches on such relevant themes and being a part of a project that promotes love and equality is special in itself.

The way the movie is structured is similar to the book in how they take on the perspectives of multiple characters in order to explore the wonder and depth of perspective. “There’s only so much you can fit into one film and I thought the different perspectives presented gave viewers a great insight into the various characters’ lives,” Izabela explains about why she appreciates the format. “If anything, it would have been interesting to see Julian’s point of view. He’s a tragic character,” she adds about Auggie’s biggest bully in the story, “and there’s more to him than meets the eye.”

“I hope Via shows viewers that you don’t have to live in someone’s shadow to express your love and understanding for them,” Izabela answers when I ask what she thinks the lesson of Via’s perspective is. As an important walk away, she quotes the character of Auggie saying, “I think there should be a rule that everyone in the world should get a standing ovation at least once in their lives.”

Adding to that, I ask Izabela what advice she’d give Via if she could, to which she responds, “Throughout her life, Via tries so hard to blend in for her brother’s sake—that she doesn’t pay attention to her own needs. This is especially true after she loses her grandmother and best friend. So—if I were to meet Via at the beginning of the film, I would tell her to embrace her desire to shine.” Bringing home one of the lessons of Wonder, Izabela would want to give Via the words of wisdom that Via gives to Auggie at the beginning of the movie: “You can’t blend in when you were born to stand out.” 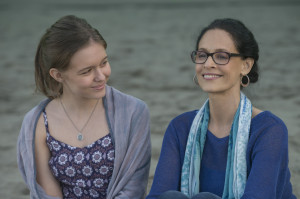 Just as Wonder is a story about kindness about the impact that people have on people, the way Izabela talks about the set is reflective of this. “What I learned most from working with these veterans of the industry was that no matter what level you’re on, treating people kindly and with respect is the most important thing. Of course, you should always be nice and treat people equally, but it was inspiring to see that the iconic actors/actresses I got to work with applied this in their everyday life as well,” she says referring to the likes of Owen Wilson and Julia Roberts who play her parents.

Izabela got to form a bond with her cast strong enough that we can see how close the actors are off screen, on screen. “The scene at the end of the film, Auggie’s graduation, was a fun one to shoot,” she shares a memorable moment between her and the actors playing Justin and Miranda. “Nadji (Jeter), Danielle (Rose Russell) and I were seated next to each other for this scene and we literally could not stop laughing about an inside joke. We were in tears. That’s one of my favorite on-set memories.”

We knew we were making something of incredible significance because Wonder was an opportunity to spread awareness about craniofacial disorders—which hasn’t been as widely known about.

One of the whimsical things about Wonder is Auggie’s obsessions with Star Wars, science, and space. It adds an extra innocent, childlike layer to the story. “I’ve seen the Harry Potter films more times than I can count. I’ve also always enjoyed English as a subject since I love reading/writing. Music is another major obsession of mine—I’m almost always listening to music,” Izabela answers when I ask her what her equivalent obsessions are.

Another innocent and childlike trait is Auggie’s “superpower” to tell a lot about people based on their shoes; a trick he learned after realizing the awkwardness of people seeing him for the first time and his instinctual behavior to look at the ground instead of making eye contact. Izabela jokes that for her, her shoes say that she’s eternally stuck in the wrong season. She laughs explaining, “I love boots—they’re my favorite. I even wear them in the summer, it’s kind of ridiculous.”

“Through Wonder, I have met families with children that have facial differences. It’s been amazing to meet people that have really lived Auggie’s and the Pullman’s life. Because hearing their real-life experiences helped me gain a greater understanding of what exactly they’ve had to face,” Izabela explains. It was important to the cast and crew that they represent people with facial differences in a respectful way starting with creating a well-rounded character in Auggie. “What amazed me most, was the incredible bravery and optimism you find in these children and their families. Despite the countless surgeries and the challenges they’ve endured, they were yet so gracious to be on our set. Whereas in actuality, they are the real heroes.”

“It’s safe to say that from the beginning, we all knew we were making something important. This film touches on such relevant themes and being a part of a project that promotes love and equality is special in itself,” she starts as we close out our interview with how she realized the significance of the story Wonder. “We knew we were making something of incredible significance because Wonder was an opportunity to spread awareness about craniofacial disorders—which hasn’t been as widely known about,” Izabela points out the lack of representation in mainstream media, thanking R.J. Palacio for hopefully starting a conversation that will continue on.

Isaac Ordonez Dives into the Mysterious & Spooky of Netflix’s ‘Wednesday’

There are television shows with a theme that is so iconic, only a few notes need to play for its familiarity to ring in…