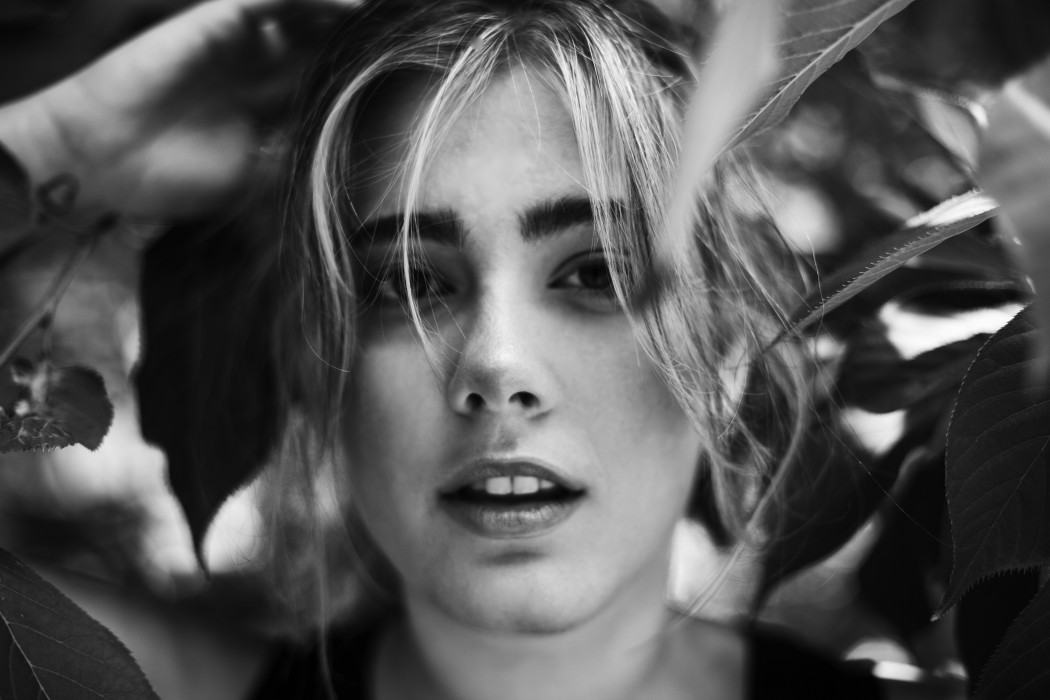 Needless to say, rising singer RZMRY is already a standout this early in her career. At first glance, it’s because of her stage name, RZMRY which stems from her real name Rozmary. Then, it’s the way she carries herself; with an honest, determined confidence and humble, self-deprecating humor. When you listen to her debut EP GLD, which dropped earlier this year in March, her talent and grasp on the influence/power of music prove music is what she was meant to be doing.

Hailing from Connecticut, the artist was encouraged at a young age to pursue her dreams of being a performer with the help of her family. “I’m lucky that I have a supportive family, one that didn’t put up a huge fight when I didn’t take a normal path,” she shared about how they shaped her. “Connecticut as a place shaped me with the experiences I had there and with its proximity to my favorite place in the world: New York. I am very grateful for that.”

RZMRY also gives credit to the debut album of the Princess of Pop, Britney Spears, Baby One More Time for sparking something inside of her. “Listen,” she begins, “you’re going to think, ‘What does a five-year-old know about making decisions for the rest of her life?’ But my first CD was Britney Spears’ Baby One More Time. I performed that thing for everyone, everywhere, telling them that one day I was going to be a singer. I’ve been striving for that as best I knew how since I was five and never looked back.”

While her music is labeled under the pop genre, it also can’t be pinned down to one thing. Over the eclectic, dancey, upbeat instrumentals of her songs come lyrics of a deeper meaning or offer a message and story to tell offering a euphoric vibe expected from an indie song. Taking a previous description she gave, her music would be self-classified as, ‘Honest Tea Pop’ while that could have changed as the days have passed since.

“I am a very open person, but I think the reason that I don’t concern myself with censorship at all is because men don’t have to,” she responds when I ask her about how she allows herself to show so much vulnerability and openness in her work.  “I am striving to make strides for myself, but also for other women. I can’t imagine there’s a topic I would try to stray away from or anything I’d refrain from doing for the sake of censorship. We’re taught from an early age not to be open and vulnerable because doing so would make you weak, but I disagree, I think it makes you strong.”

Consisting of four songs, each song on GLD was written in a different location. In the order of the EP, the songs travel from New York to a plane on the way to L.A., to the car ride to the studio, before reaching the final destination of the studio. “I think the only way there is a reflection of that is that I lyrically wrote about ‘New York’ and about L.A, ‘the 405,’ she explains when I ask her if the songs reflect the movement and relocation that inspired the writing. “Other than that, I don’t know if it’s noticeable for anyone other than myself!”

“Lyrically, ‘You know that I cannot be stopped until I get what I want,’ affected me,” She shares about how writing that lyric in the song “GLD” made her realize something was becoming of her work. “I remember my producer saying he found it interesting that I wrote with the confidence and perspective of someone who already made it big in music even though I was only beginning. It wasn’t my intention,” RZMRY explained. “I was simply trying to abide by this: ‘If you don’t believe in yourself, who is going to?'”

Choosing to educate herself on a range of different topics that interest her and what she has taken away from her own education, GLD includes hints here and there while RZMRY says she would love to expand on them further. “If there is a way for me to do it, I would love to in the future,” she begins when I ask her if she’s found herself incorporating her different interests such as (but not limited to) feminism, health and wellness, and pop culture in her music.

“As far as what I’ve released so far, pop culture has played a big part.” She expands on this by citing two songs on the EP, first; ‘Limelight,’ “It definitely leant a hand in ‘Limelight,’ and other stuff I’ve been writing has been influenced by words or a storyline from a book I’m reading or a TV show I’m watching.”

The second one, ‘Baby Blue,’ tackles a hard, but a real subject that is a reality for many, but is usually either ignored or glamorized in music, “Like you mentioned earlier, I am a very open person so that stuff affects me deeply. In some ways, maybe ‘Baby Blue’ is an outcome of educating myself on feminism. I have yet to be asked about it or mention it because I like to give listeners the opportunity to find what the song means for them, but that song was written from the perspective of a victim of domestic abuse. It’s a topic we fail to give enough attention.”

When we discuss surprising themes and emotions when writing, RZMRY admits that every time, “It’s all a surprise” to her. “As an artist, maybe I should be more in tune with what I’m feeling, but sometimes I have no idea until it’s written on paper. I put pen to paper or finger to keys and suddenly I’m flooded with everything I’ve been suppressing that needs to get out. If you think you’re surprised hearing it, imagine my surprise writing it,” she adds.

RZMRY’s sound allows for her to reach a wide audience rather than one specific demographic. This, she shares, is something that she does think about. “It’s easy to feel like our interests and our struggles are completely unique. It makes us feel alone, like outsiders. All I can do is speak on behalf of that mindset and put things into perspective as best I can for myself and for others,” she says about how she hopes what she has to say can help those listening. “If I can do that in a way that feels good and authentic and makes people want to listen, then I’ve done it successfully.”

Focusing a little more on lyricism, RZMRY explains that if she could choose any lyric to autobiographical, it would not be her own, “I’m a firm believer in what John Green said when he said, ‘Maybe our favorite quotations say more about us than about the stories and people we’re quoting.'” However, if she choosing her own lyric from the GLD EP, she goes back to the lyric that helped start it all, “I cannot be stopped until I get what I want.”

If you have not yet heard her original music (or even if you have), perhaps, you’ve heard (or should hear) her cover of DNCE’s “Toothbrush.” “It was a total accident. I’ve loved the song ever since I’d seen DNCE perform it live,” RZMRY begins about how she made her version of the song representative of her. “I was unsure of how to make it my own so I decided to try it acoustically just to see how it felt.” What she didn’t realize was how powerful this effect would have on her, “I ended up walking out of the booth with my hands shaking; I was so overwhelmed by emotion. That was my first and only take. I was too drained to do it again and listening to it back, it was everything I didn’t know I wanted to release.”

For her covers to come, RZMRY adds a mystery to what we can expect but offers a few hints, “If it’s a song you wouldn’t expect me to cover, it’s one I want to cover. Challenging myself is important to me. It’s the only way I can grow as an artist. I do have an old school 2000s cover that will come out, which will be really fun.”

“I think being myself is what will make me profitable,” RZMRY explains about how she doesn’t intend on losing herself and what she stands for  to become “more profitable” as she dives deeper and deeper into working in the music industry. “My emotions are on my sleeve. If I’m not being true to myself, I think it would be completely obvious to audiences that my heart wasn’t into it. That wouldn’t sell.”

This also dips into the answer she gives when I ask her what she thinks is important for fans and listeners to realize about an artist.

“I think the most important thing to realize is artists are humans,” she begins. In a day and age where social media allows for more connection and reach to an artist, RZMRY explains that in a lot of ways it offers some good in establishing your brand, but also humanizing an artist in a way that maybe has not been done before, “I think Snapchat is probably the platform that offers the most opportunity for an artist to appear, human. Instagram is tailored to how we want to appear in the public eye, but Snapchat is honestly just a reminder that we’re all weird as fuck. I personally try my best to spread that across every platform, but, like anyone, I care what people think about me, so it can be difficult. I try not to take myself too seriously.”

Getting close to closing out our interview, RZMRY gave a few worthy recommendations, starting with a work of art that has inspired her as both a singer/songwriter and a person, “The most recent art that I’ve been appreciating is a book called The Girls by Emma Cline that my high school drama/English teacher recommended to me awhile ago. If you haven’t heard of it, here’s a quote that  I loved (and definitely highlighted) to give you a sense of it:

“That was part of being a girl—you were a resigned to whatever feedback you’d get. If you got mad, you were crazy, and if you didn’t reach, you were a bitch. The only thing you could do was smile from the corner they’d backed you into. Implicate yourself in the joke even if the joke was always on you.”

For my final question, I ask her plain and simple, “For the people that fall in love with your music, what would you recommend they watch/read/listen to next?” to which she offers up her public Spotify playlist EPIC consisting of a variety of music from upcoming artist Leaf to Banks, Kehlani, Bridgit Mendler, Kendrick Lamar, and Tori Kelly. And these are just a start to the multifaceted playlist that RZMRY concludes by adding, “I’d say that’s worth a listen.”

Jet Jurgensmeyer Spills the ‘Legends of the Hidden Temple’

The excitement surrounding Nickelodeon’s newest film Legends of the Hidden Temple has been growing as its premiere date quickly approaches. The movie, based off…