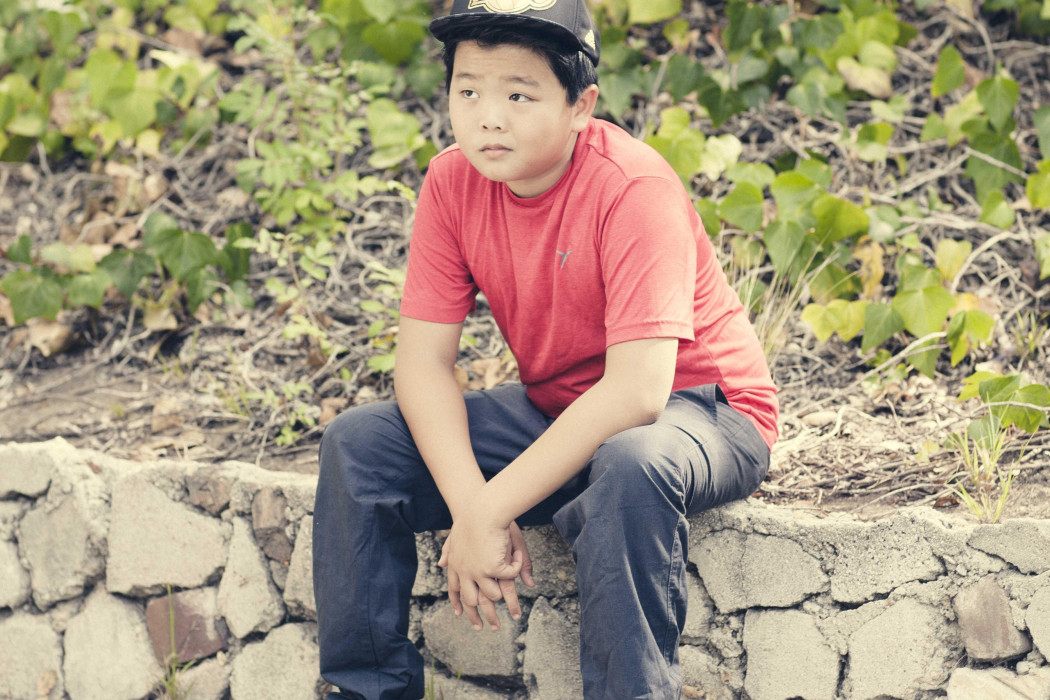 For some, acting comes naturally. It’s a talent that they’ve been born with and are able to turn on in a snap. That’s just the case for Hudson Yang.

With just one professional acting job of a small part in an independent film on his resume, Hudson was able to snatch the role of ‘Eddie’ on ABC’s hit comedy series, “Fresh Off the Boat”.

However, acting wasn’t always in the cards for him, but rather sudden.

“Well, it kind of started out a little weird,” Hudson explains. “I was watching TV, and some of my friends were acting, and I was like, ‘Oh hey! I want to do that!’ Then, I saw that Sandra Bullock got $80 million for a movie. I was like, ‘Oh man, this is going to be the best job in the world if I get $80 million!’”

Hudson says that at first, his dad laughed off the idea of him wanted to act until he realized that Hudson was serious. “[My dad] talked to some of his friends and they got me an audition for an independent film, but I didn’t get it. I got really far, I was on the last audition, and the only reason I didn’t get the role was because I wasn’t experienced enough.”

He explains how the casting directors advised him to get an agent, as they thought he was really good. So he did just that and afterwards, landed a small role in the independent film, ‘The Sisterhood of the Night.’

Following the movie, Hudson says that he was still a regular kid. “I thought it’d just be a hobby or something to do. And it worked out, so I’m really happy about that!”

A few months after, Hudson auditioned for the role of ‘Emery’ on “Fresh Off the Boat.”

“I auditioned and Eddie called my dad personally to say, ‘Your kid is not right for that role!’” Hudson explains that his father thought it was due to his lack of experience but Eddie Huang, whose life the show is loosely based off of, had actually wanted Hudson to play the young Eddie. “I went to the chemistry read and everything worked out!” he says.

Hudson says that he is really similar to his character Eddie, who he claims is a “daring soul.” Hudson says, “[Eddie will] do what he wants to do and he’ll say what he wants to say! And I think of myself doing that stuff too. He’s a crazy soul. I feel that after I started the show, I have to live up to him, be a little more YOLO.”

“Age and wisdom,” is what he explains is the biggest difference between himself and his character. “He’s a lot smarter than I am in so many ways. He’s older than me. He travels a lot more.”

Since “Fresh Off the Boat” is based off of the life and memoir of Eddie Huang, a famous chef, Hudson hopes that fans get to see character cooking more in the future. “I really hope that Eddie starts taking cooking a little more serious. I hope it starts developing more and I get to use the pans and get to cook, like make stuff for the family. Because Eddie, in real life, is a really popular chef, so I want to be like him.”

It’s a good thing that Hudson isn’t nervous about the attention anymore as he has become quite noticeable. “People recognize me more,” Hudson explains as one of the biggest life changes he’s experienced since the show started. “Before the show, the only people I really knew and talked to were people inside my friends circle at my school. Now, a lot of that has changed because now people come up to me on the streets like, ‘Oh hey! You’re Hudson Yang! I love your show!’ It’s cool.”

Being on a nationally televised hit comedy series can get to some people’s heads but not Hudson. “When I see myself on television, I don’t see it as being anything special. I kind of see it as I’m doing a YouTube video but for more people.”

The family you see on television is a family off-screen as well. “Before, I would have said all the cool things we get to do but the truth is, my real favorite part is hanging with everybody’s on set,” Hudson says. “They’re so nice and they’re so fun – we do so many things together. For Christmas, we all did a Secret Santa with everyone. It was so much fun.”

However, don’t ask Hudson to pick a favorite memory from set as he can’t choose just one! “There’s so many memories that we’ve made on set that are really meaningful to me.”

It’s much easier for Hudson to pick an episode he’s really excited for fans to see, although he says they were all so much fun to film, which is the Chinese New Year’s episode, airing soon.

Acting was more of a sudden happening for Hudson, and whether or not he’ll continue it after “Fresh Off the Boat” is up for grabs. “Depends on how my life turns,” Hudson says. “If this show lasts a long time, I’ll keep with it. And maybe after the show, if I get another offer, I’ll do that too. But I think around the time of college, I’m going to stop acting for a little bit, go to college, then come back and continue on if I can. If not, I want to get a Masters degree and start a different job, start a new life kind of.”

Although it’s early to say what his degree would be in, Hudson is leaning towards physics. He explains that his dad and he always have conversations about quantum physics and reality. He says he finds it fun and something he’s really interested in.

For the time being however, he’s going to enjoy his time playing ‘Eddie’ on “Fresh Off the Boat”. He says to fans, “Keep watching! Thank you for acknowledging me and all of the other people on the show. Thanks for supporting us!”