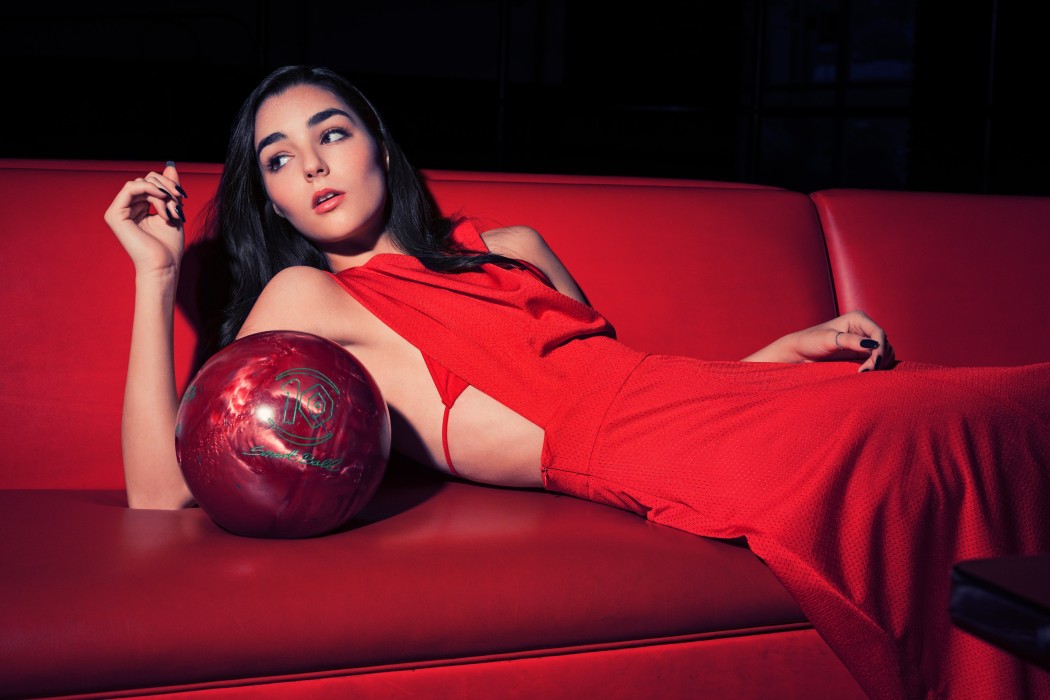 The first thing your eye goes to when you look through Indiana Massara’s main pages on social media is the color red. A dominant color both in color theory and in the universe, it’s energy can be read as something as emotionally significant as passion as well as something as resilient as strength.

For Indiana, this color becoming the palette of her life (at least publicly) was unintentional, but something she embraces. “I think it’s because it’s such a bright and intense color it made me feel stronger and happier when I was wearing it,” Indiana explains about how the color has given her power. “I seemed to always have a good day when I wore it and the pictures on Instagram got a great response whenever I wore that color, so it became a thing!”

With her latest project, “Run You Down” she slightly veers away adapting a darker, more midnight color scheme while still rocking a bold, red lip. This new single serves as the theme song for the new Brat Productions vampire series Red Ruby. To get a visual inspiration while songwriting, Indiana and her team had The Originals and The Vampire Diaries playing in the background. In order to ground it a little more and keep from the song being strictly about vampires, they focused on centering the song around an emotional aspect. More specifically, “Run You Down” is meant to be a revival/comeback from being at the lowest point because of someone else to rising to the top and reclaiming that worth.

“Feelings are feelings for everybody, so we just used metaphors to work it in the vampire element. For example, ‘my turn to take a bite’ actually is about someone rising up and having their cake and eating it too, not about an actual vampire biting,” she gives insight to writing from that perspective.

Getting this opportunity came from her ongoing partnership with Brat Productions which started about two years ago with their show Chicken Girls, where she plays the role of Rooney. “Seeing her character evolve has been amazing. She was kind of stand-offish right in the beginning, but quickly she became the cool, edgy character who was independent and sure of herself. She is still all of these things, but the writers have given her a softer side,” Indiana talks about the character. “There are times when we see her vulnerable to love and going through all the same things girls do at my age and also being loving when she puts her step-sister Quinn first after she fell for Rooney’s boyfriend Hamilton.”

Rooney doesn’t back down easily and she’s taught me that it’s ok to mess up and do things that you think are right even if it’s unpopular or hard.

Her excitement over the character getting to evolve and grow also stems from learning about herself through the character. “Rooney doesn’t back down easily and she’s taught me that it’s ok to mess up and do things that you think are right even if it’s unpopular or hard,” she says. For the upcoming episodes of the show, Indiana teases that Rooney will be working on “finding her feet with love and developing friendships” and a lot more in store than people realize.

“Brat has been life-changing for me,” Indiana reflects. “I started with them and I only had four thousand followers, so working with them has given me an audience for my projects. They allow me to be creative where possible and that’s something that is unique about them and I love them for it.” Indiana explains that having worked with Brat Productions in the capacity she has and gaining her following has opened a dynamic between her and her followers where she learns and is inspired by them and hopes they feel the same, “I’m usually going through the same things as they are, so it’s nice to know I’m not alone and if I write about whatever it is, I hope it makes everything more relatable.”

Along with the relatability, Indiana is also aware that honesty–flaws and all–are evident in what she shows. “I am definitely not perfect so people looking up to me makes me uncomfortable, but it comes with what I do, so it’s a responsibility that is always on the back of my mind,” she says. “Rather than ‘use’ my platform I just stay genuine for my followers. If I’m having a bad day, I share it online, just like I share the good days.”

Social media–more specifically Youtube–has opened doors for Indiana and others with a similar path as her. But, Indiana points out that sometimes this can lead to pushback from others once they notice the person branching out to do other things. “The most common misconception I see is that people assume I am only just starting music now. I was singing from the age of about seven or eight in choirs and that was long before I ever considered acting as a career. It’s just that most people came to know me by my acting projects first, that’s all,” Indiana simply states.

I’m usually going through the same things as [my followers] are, so it’s nice to know I’m not alone and if I write about whatever it is, I hope it makes everything more relatable.

“There was an issue for a long time about ‘influencers’ breaking into music and unfortunately it wasn’t helped by the diss tracks that were put out. That barrier is slowly being broken down now and people are finally getting the message that it’s 2019: people can choose whatever career path they like and they can change their minds and try something new whenever the heck they like.” She continues adding, “It doesn’t mean they’ll succeed or be good at it, but who cares? Let them live their best life. We should be celebrating diversity in what we do, not just in people.”

Even if someone was to assume that Indiana’s interest in creativity professionally happened overnight, as Indiana mentioned, she sang in choirs when she was younger, but she also has a foundation in musical theatre. Something that she says hasn’t influenced her current work and ambitions, at least not by a significant amount, but that she does still enjoy. “My parents would play everything from so many different genres including foreign songs. We traveled a lot, so I think having exposure to so many different worlds is still my biggest inspiration creatively,” she gives insight to her musical background and upbringing.

One recent example of how being exposed to different genres and worlds influenced the way she creates and what she creates is her cover of the Tommy James and the Shondells original, “I Think We’re Alone Now” which was repopularized by pop artist Tiffany in the 80s. “I heard it on the show Umbrella Academy and I thought it would be cool to bring the song back to life for my generation in a different way,” she talks about how making her version came about. “When I researched the song, I listened to the 1967 version and loved it. I also loved Tiffany’s version, so I tried to take a little bit of each and incorporate them into the song and the visual.”

Aside from that cover, Chicken Girls, and “Run You Down,” Indiana exclaims that she has a ton coming up even though she can’t share much about them. One project that she can share is that she recently did a ten-episode series that airs in the next couple of months, “I really hesitated over the project at first because it was completely different. I wasn’t sure how I felt about the area we were focusing on, but as soon as I started shooting, I got so into everything and I found myself wanting to know more and continued researching after filming finished.”

On her musical side, folks in Wisconsin can see her June 23rd at KISS FM’s Kiss the Summer Hello Milwaukee concert alongside Why Don’t We, Ava Max, and Bryce Vine.

Teenplicity: How do you deal with the hate?
Indiana Massara: I ignore it.  I honestly don’t get very much so I’m lucky I guess.  It’s sad that you have to build up a tolerance to it, but now if I see anything it honestly doesn’t bother me.  At the end of the day I have to be comfortable with who I am and my actions, and I can’t let anyone else define that with their opinions.

T: Did you ever imagine having fans all around the world?
IM: Never.  Not ever.  It’s cool to think that somebody in a country I have never been to knows me and is maybe connecting with my music or watching one of my YouTube videos when they are having a hard time.

it’s not u it’s me – Bea Miller feat. 6LACK
Let’s Fall in Love for the Night – Finneas
Paradise – Bazzi
For You – Paris Lain
Used To – Nbdy

You can get tickets to see Indiana Massara perform at the Kiss the Summer Hello concert here.