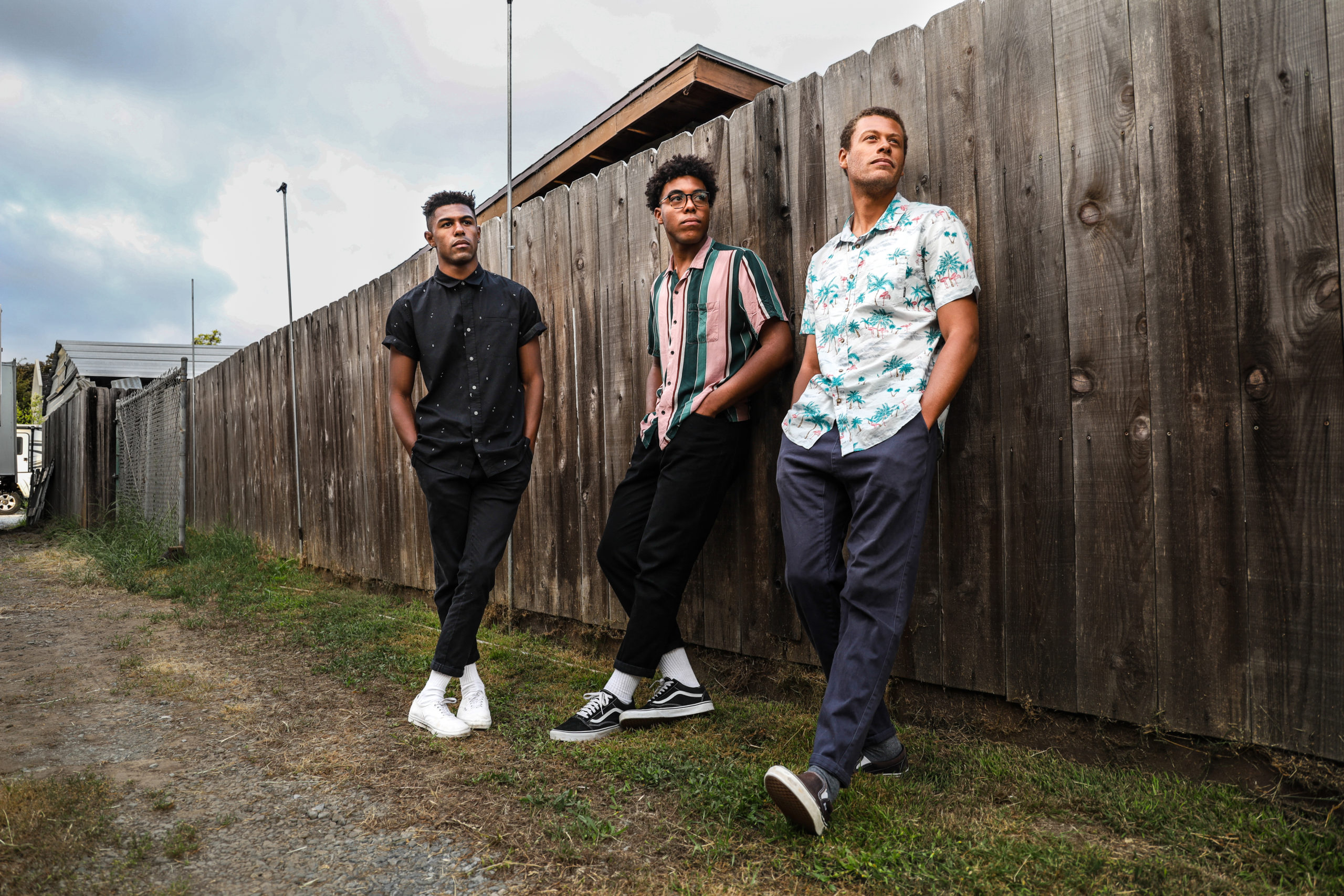 It’s fitting then, that the last name of Carlsbad/San Diego brothers Lenny, Jordy, and Cam would be ‘Comma’. Also known as We The Commas, the band from Southern California aims to bring a new face and name to the visual and musical narrative of beach culture. Having made music their whole lives, they define their musical stylings as “surf alternative R&B” also known as “SARB.” “The coolest thing about us is how incredible it is that we grew up together and all share a common passion for music. We are also best friends,” says the three.

Their love for music grew with the help of their parents who put them on to artists like Stevie Wonder and The Jackson 5 at a young age and when they noticed the way the three gravitated towards music, enrolled them in music lessons to help them hone their craft. Along with lessons, the three found joy in the game Rock Band with the oldest, Lenny, citing “Roxanne” by The Police as his go-to song on the game for guitar while Cam, the youngest, claimed his as “Barracuda” by Heart.

“We all enjoy similar types of music as well as very different genres of music,” Jordy explains sharing that the three coined “SARB” as a way to describe their sound while in music school. “Each of us individually has the freedom to express ourselves and our own musical gifts within our band construct. When we all come together as a band, that’s where absolute magic is created.”  While they allow for individual creative expression, the three prefer to make music together than by themselves.

When we all come together as a band, that’s where absolute magic is created.

In terms of influences, Jordy shares the likes of Young the Giant, Stevie Wonder, and Frank Ocean to name a few. “We also have very different influences too and that brings a unique element to the table and the band. Since we are best friends, we are constantly open and vulnerable with exactly what is it we are experiencing in life and that’s reflected in our songs.” 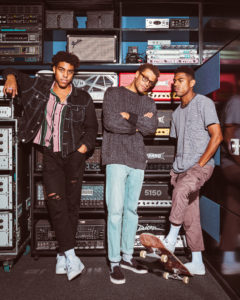 One of the songs from their debut EP SARB, which released at the end of last month, “Pissed Off” found its origins in Lenny’s college years. He describes the way he felt in that moment of his life as feeling lost on the road towards his life’s destination. Something a lot of us feel around that age, the pressure to choose a career path at that moment found Lenny in a fit of confusion and frustration. “Writing ‘Pissed Off’ made me feel like the discomfort I was feeling was actually real. When I acknowledged what was going on in my life through writing the song, I was finally able to address it face on and move forward. Before that, I spent so much time just doing things on impulse and not reflecting on what I want out of life or where I fit in this world,” Lenny explains. “The main thing that needed to be showcased is how real this feeling of aimlessness can be and that it can make you feel helpless, but that it’s okay to not have everything figured out. We all need to make little steps in the right direction and eventually, life will feel fulfilling.”

“I think the beautiful thing about growing through that time in my life that inspired the song, ‘Pissed Off’ is that I’ve learned how to keep myself from getting pissed off for an extended period of time,” Lenny continues about how he’s in a different place from where he was when the band first developed the guitar-heavy track. “Life is hard sometimes and it’s okay to admit that and feel it, but as a band, we try to take what we can from difficult situations and move forward.”

Life is hard sometimes and it’s okay to admit that and feel it, but as a band, we try to take what we can from difficult situations and move forward.

The three prefer to look on the bright side of things embracing the zen vibes of their hometown and their own supportive dynamic. “We have learned that it’s the most incredible feeling when we are doing something we love together. Music is something that bonds us together and it constantly allows us to see how creative each person in the band truly is,” Jordy shares. “Music has taught us how to come together as one and strengthen our relationship as both brothers and friends.” 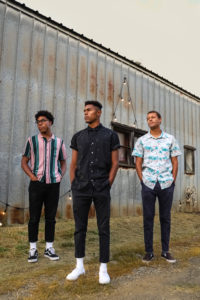 As the middle song of the EP, “Pissed Off” served as one of the leading singles off of SARB bringing to light the alternative energy and musical abilities. Although the songs are all different, they all fit cohesively within the story of the three brothers. Their hope with their use of playing around with their sound is to show their diversity as a band. “From the love songs on the beach to hard rock in the desert, we have an appreciation for so many different types of music. We love lacing all of it with that feel-good surf guitar as a through-line. The people have only scratched the surface of what our music has to offer and we are so excited to keep surprising everyone,” the trio says.

“We want to make music that has a lasting impact on people’s lives and maybe gets them to see life through different lenses than they’re used to. It would be awesome to have our music trigger good memories of someone’s experiences later in life after having been introduced to it earlier,” Lenny explains about the place they want to have in music.

Another song on their EP, “Custom Made” is a merge of 50s pop, R&B, and classic jazz. In line with their other dream-like love songs, the song imagines a love story where the two were custom made for each other. The music video takes it a step further with the guys doing a photoshoot where they take on different variations of boy bands/trio’s as they perform the song. “Reinventing being a boy band is something we’ve never put effort into or actively pursued. We’ve never even thought of it actually,” Cam admits when I ask them about it. “We’re just three brothers who happen to love playing music together. It’s not a very calculated thing, rather just doing what comes naturally. Being ourselves, being brothers, and being a band is all we’ve known since we were little.”

Making SARB and officially putting out a body of work that defined the sound they developed for themselves, they worked hard to make sure the project was just right. “We have so many songs that we have written,” the three explain. “We really wanted our first EP to slowly introduce us and our musical scope. Slowly dipping your toe in the pool to check it out before jumping in. Where it has evolved to now where we are revealing a bit more of our scope than we initially intended within the first EP,” they say.

“But it’s a good thing,” they add after a pause. “People won’t have to wait till our second album to feel the current of our waves. They get to put their whole leg in the water.”

With Lenny having studied film in college while Jordy is currently majoring in psychology, their music and their videos are both sensory and story-driven as they aim to be the most authentic versions of themselves and go against any stereotypical assumptions they were expected to uphold both as people and artists. “We are all definitely heavily inspired by movies and tv,” the band says. “Writing skits or brainstorming short film ideas is something we really enjoy doing when we aren’t creating music. This creative outlet comes into play heavily within the music when we are making music videos,” they explain prioritizing wanting to make sure they deliver something fresh that people haven’t seen before.

Our main objective is to show people through our music and lifestyle that they can be whoever they really are and do whatever it is they are passionate about.

“In the midst of everything going on, we have been really focused on who we are as humans, young men, and brothers. We have been super focused on our music and we don’t have many distractions,” Lenny begins when I ask the band what’s been the most fulfilling part about working on music right now. “Though it would be great to go out a lot and do a million things, it’s been really fulfilling to go inward instead with our passion which is our music and our family. We also still surf almost every morning.” 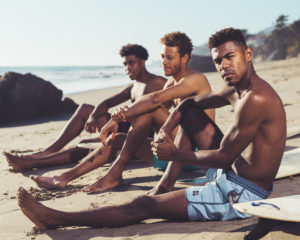 In their interview with Pop-Culturist in June, the band mentioned that in the midst of fighting social injustice and dealing with the pandemic, they found themselves, “reading the ocean and picking our waves.”

“We find solace in the fact that a majority of our country—and the world—feels like they are finally seeing social constructs and injustices for what they are. Three hundred and fifty cities in the US are filled with people standing together for change. We as young black men need this change,” they told the site.

When I ask them what those oceans and waves have looked like lately, the band says it’s pretty much stayed the same. “This pandemic isn’t gone and bands aren’t touring. Life has not gone back to normalcy yet. It’s shifting all around us and like waves in the ocean, we have to keep our eyes open, feel the current, look out for others in the same ocean. We have to adjust, read, and pick and choose. We have been doing just that,” the three say. Like most of us, this has also looked like checking their phones and making connections that way, “We’ve actually spent a lot more time on our own social media, using it to reach more people.”

Closing out our interview, I ask them how they hope that so far they’ve defied any preconceived notions that they may have been given and how they hope to continue, to which Lenny responds, “Our main objective is to show people through our music and lifestyle that they can be whoever they really are and do whatever it is they are passionate about.”

We The Commas Mini-Playlist for Readers

Their debut EP SARB is available wherever you stream music.

When The Fabelmans hits theaters next Friday, it will give audiences an inside look into what sparked the love of filmmaking in Steven Spielberg…