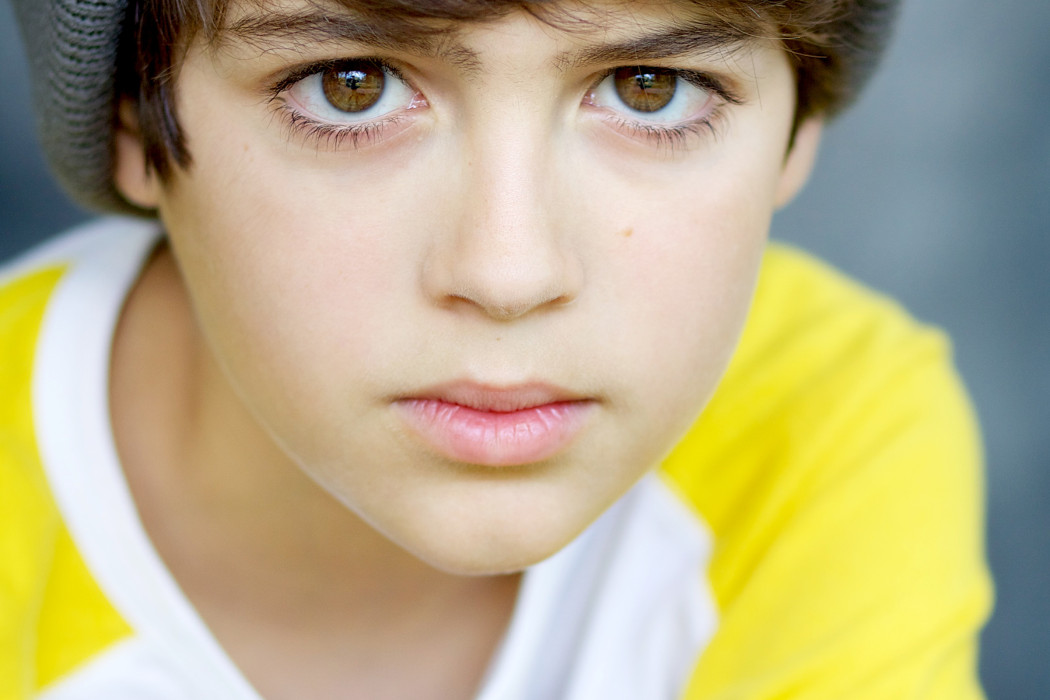 “Break Point” is a story about two estranged brothers that reunite and, with the unlikely help of an 11 year-old-boy, make a run at a grand slam tennis tournament. Joshua Rush plays the 11 year-old-boy named Berry, with great comedic timing and insight for the other characters. In 2014, “Break Point” won “Outstanding Achievement in Filmmaking” at the Newport Beach Film Festival and was nominated for “Narrative Spotlight” at the SXSW Film Festival. It released to theaters earlier this month and is available on iTunes and Video On Demand.

Barry is “this funky, weird kid,” Joshua comments on his character in “Breaking Point”. “He dresses really outrageously, and acts sort of crazy sometimes! He is a fun character to play, and he ends up bringing our two main characters together.” Barry is an easily lovable character for his quirks and blunt honesty at times. As far as time on set, Joshua loved it all. “Does all of it work? Because everything on that set was AWESOME!” he enthused when asked what his favorite memory was.

However, Joshua Rush is no newcomer to the entertainment industry. “My mom really got me in to acting,” he says. “She noticed that I really liked being around the camera at age four or so, and so she got me into modeling, and it just kind of grew from there!” His time in the business so far, though he is still young, has shown his great versatility. From television to film, animation to Netflix, Joshua’s work can be found virtually anywhere! “It has all been really amazing, but I never felt overwhelmed by the projects. They are all different, and they are all really fun to do!”

Finding his favorite part about acting is not as easy as it sounds. “That is really hard!” he tells Teenplicity. “I love being on TV, I love being in movies, and I love doing voice over, so I guess my answer is nope! I love them all equally!” Switching from behind the camera to in front of it is as different as one can imagine. “They are both really different in their own ways,” Joshua says, referring to acting in front of a camera versus voice over work. “Being in front of the camera can be more tiring, but it requires more thought to be in front of the microphone, in my opinion. I have to think about what the animators are going to do with my voice, and though I totally trust the great animators at Disney, DreamWorks, and Cartoon Network, I always want to help them as much as I can.”

And helping animators with his voice over work is going to be a large part of Joshua’s future considering he got the role of ‘Bunga’ for ‘The Lion King’ TV movie sequel and subsequent “The Lion Guard” series. On joining the project which has a deep rooted legacy and connection with fans due to the original “The Lion King” movie, Joshua says, “IT’S TERRIFYING!” He tells himself, “Some people are not going to be so happy with it… until they see it. It is going to be so great, and anyone who thinks that it will not, will be eating their words come November.” Don’t believe him? Joshua adds, “Trust me, I have seen it.”

Also, don’t expect the new TV series to be just like the original film that spawned the franchise. “‘The Lion Guard’ is very different. We have a new storyline, new people, and totally new enemies, but it still has that pizazz that only a ‘Lion King’ storyline can deliver.”

Another project of Joshua’s that is coming out in November is the movie “Sex, Death & Bowling”. Following his father falling ill, Joshua’s character, 11 year-old-boy Eli, must find another teammate to help him fulfill his goal of winning the Fiesta Cup bowling tournament. His new teammate, his uncle with an estranged relationship with Eli’s father, is confronted with old wounds and works with Eli to find positivity and hope. On getting into a character from such an emotional storyline, Joshua says, “‘Sex, Death & Bowling’ is really different from ‘Break Point,’ and took a lot of different preparation. It is not so much hard, as it is more difficult to get in to a character like Eli than Barry.”

In addition to his impressive resume at only the age of thirteen, he has worked with big names such as Billy Crystal, Bette Midler, and Marisa Tomei. “I like to say, ‘You can get a nugget of golf from everyone you meet,’” Joshua explains of their influence and advice. “That means that every person I have met, whether they be as big as Billy Crystal, or someone small, is a person that I can learn from. I cannot particularly remember specifics of knowledge I gained on the set of ‘Parental Guidance’, but I know that I learned a lot.”

In the future, Joshua has big goals he wants to reach. “I want to be James Bond,” he enthuses. “Between the cool cars, the nice suits, and the whole secret agent thing, there is not much downside to him. James Bond is the coolest of the cool.” It makes sense that his dream co-star is Daniel Craig. “I would love to work with Daniel Craig, because, well… he is James Bond.”

With his immense love of science & technology, he wants to let everyone know, “If there is ever a House reboot, then I am totally in!”

However, past that, acting might not be Joshua’s whole future. “To be honest, I am not sure,” he says when asked if he’d want to continue acting in the future. “I love acting, but I think that in the future, I would like to be a doctor or lawyer.”

Being a child actor is not an easy thing to accomplish, especially with as busy of a schedule as Joshua’s! “Being in regular school and still acting has been a really hard one. It is not easy, but I do it because I like the friends that I have at school, and I love acting!” It is easy to say, though, that no matter what Joshua is doing, he is putting his all into it.

Acting, schooling, and keeping positive is definitely aided by the help of his fans, and because of that, Joshua has a special message for all of you.

“You guys are awesome! Keep being cool, and I really appreciate your support!”

Outside, the sun and the warm weather are out in full force with the days being long and the nights expected to be those…