For Cree Cicchino, her start in the acting business was just like her home city of New York – big and in great fashion.

The 14-year-old actress had not been acting very long when she signed on to what is now one of Nickelodeon’s newest hit shows, “Game Shakers”. Headed by Dan Schneider, the mind behind famous Nickelodeon shows like “Drake & Josh”, “Victorious”, and “Zoey 101”, just to name a few, Cree took on the role of Babe, a witty genius and one-half of the brilliant duo behind the world’s hottest new gaming app – Sky Whale.

“I grew up watching all of his shows, that’s pretty much all I watched,” Cree says of working with on a show created by Dan Schneider. “I really hadn’t been acting very long so it was pretty hard to believe that, ‘Oh my gosh, I’m on one of these shows that I grew up to!’” The young actress confirms to Teenplicity that it did add pressure but also says that it added excitement too. “I feel like I could pinch myself. It was a dream.”

Described by Cree as independent, Babe is also strong and tough. However, she is still boy-crazy. “We get to see a lot of that side of her in season two,” Cree says. Audiences already saw Babe’s attempts at wooing Mason [Tanner Buchanan] in one of the very first episodes of the new season. 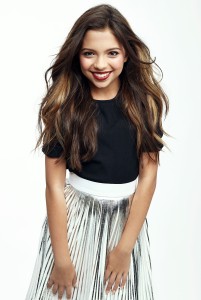 As for if fans will see more of Babe’s crush, Cree didn’t leave anyone wondering.

“We’ll definitely see just a bit more of Mason!” she reveals. “We’ve already done some other boy-crazy things.” That includes some drama involving the supporting cast, which excites Cree. “We haven’t done that yet!” she exclaims with a laugh. “So there’s no shortage of boy drama this season.”

When it comes to Babe though, she’s already tried her dancing skills in order to win Mason’s affections. In real life, Cree has been dancing for over a decade. Considering her knowledgeable past in dancing being incorporated into the show, Teenplicity asked what else she’d like to see make it from off-screen to on.

“I just started to get interested in singing – I dabble with that a little bit,” Cree reveals. “So sometime in the future it’d be fun to maybe do something with that. I really enjoy it so much, but it’s a bit of an insecure side of me so sometime in the future, it’d be great to just go for it! We already have a musical act on the show with Double G being a rapper so that could be interesting.”

With the new season only just starting, Cree is thrilled with the fan response already.

In season two, Cree says that there is more boy drama in store, which, with a laugh, she confesses is really fun to shoot and actually hilarious. She also teases two really iconic moments in future episodes.

“I was totally fangirling over [the scenes] during shooting!” she dishes. Considering how big of a fan Cree is of past Nickelodeon shows and Dan Schneider’s knack for bringing in old stars as guests, one can only hope that this means a former cast reunion is in store! Nothing has been confirmed as of yet, though.

“We definitely get a bit of fighting,” Cree continues, noting that the fighting is occurring between the supporting cast. “We really didn’t get a lot of that. Some girl-fights, some of that. A lot of new sides to a lot of characters.”

However, Cree’s excitement over the iconic scenes cannot be shaken. When asked if there was a particular episode she looked forward to most, she had to gush, “Yes! There’s an extremely – iconic is the only word I can use to describe it – episode.” She stresses that she cannot give any spoilers but, “Fans will definitely know what I’m talking about when they see it. And it’s a treat for the kids and the parents watching so it’s really exciting!”

A treat for Cree came when she got the role of Babe on “Game Shakers”.

“She has this tough New York vibe that I can also relate to because I’m originally from New York,” she says of what attracted her to her character. “She had this sense of home to her, I could relate to her.” This is good, according to Cree, considering she just moved to a new state, started a new job, and was still fairly new to acting. “[Babe] just has a lot of interesting qualities so she just altogether really brought out the crazier side of me.”

Another side of Babe is her genius, which she uses with her best friend Kenzie [Madisyn Shipman] to create one-half of the young and brilliant duo behind Sky-Whale. Throughout the first season of the series, the audience watched as Babe and Kenzie sorted through their problems, all the while creating even more fun gaming apps.

“My favorite so far has been Nasty Goats,” Cree says of her favorite Babe-and-Kenzie gaming app. “I think personally, it’s the most challenging which of course makes it more exciting and addicting. I haven’t quite mastered it yet,” says the actress, laughing as she continues, “but my sister is the master so far.”

If Cree had to create her own gaming app, on the other hand, it would be an app that helps you create a gaming app. She can’t help but laugh at her own comment. 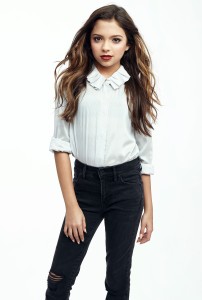 Since the start of “Game Shakers”, Cree does admit that she didn’t realize how hard balancing life and work would be.

“I think I was already used to working hard and staying dedicated with school and dance back home in New York but you really don’t know how hard it is to do acting and do school at the same time,” she says, her voice hinting at her realization. “I definitely learned that it really takes a lot of dedication, a lot of hard work, and a lot of people around you to help you and support you.”

The hard work doesn’t just stop with the actors. “There’s so many people involved with the process of creating a show. It’s not just the actors, it’s not just the creators, the writers – you have your writing team, the props, the makeup, the hair. All of that.”

As Cree wraps up her interview with Teenplicity, she is able to tease a little bit more about season two.

“We definitely, like I said, have some really iconic episodes coming up,” she says. “We have a hair change for Babe coming! Just a little something there, just tweak-age,” teases Cree before laughing. “We have some fighting, maybe even a little more dancing… Who knows, you’ll have to see!”

For her last question, Teenplicity asked Cree if she had anything to say to her fans. Below, the 14-year-old actress expressed her gratitude towards them.

“I just want to say thank you to all my fans. Thank you so much for all the support and dedication, not only in season one but so soon into season two! I mean, genuinely, we could not have gotten this far without you guys. You guys just offer so much support and love, it doesn’t go unnoticed. It’s hard for me to respond to all of you guys but I do notice all of you! I appreciate you so much! I see all of them and you guys are just the best. You’re the best Creetures ever. I just want to say thank you!”

“Game Shakers” airs every Saturday night on Nickelodeon. Be sure to check out their new episodes for season two!

FOR ABOVE PHOTO CREDITS:

When ABC’s mini-series When We Rise premieres on the network tonight at 9PM, it will be the first of four nights that document the…