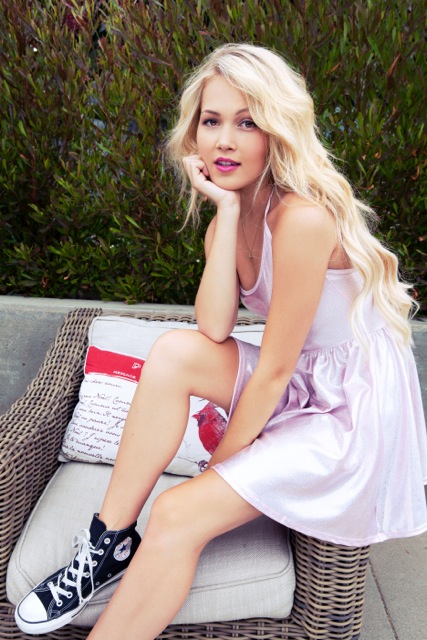 Simply said, Kelli Berglund is mature, passionate, and open. But she is so much more than three words. When she presents herself, you find that you want to completely immerse yourself in whatever character she is playing. When you see her dance, it makes you want to learn the choreography and dance alongside her. Kelli Berglund has a talent that immediately draws you in.

Her rise to fame truly came when she signed on as Bree Davenport on the Disney XD series, Lab Rats. The series has come to be one of the most popular on the network, spawning four seasons, a multitude of specials, and quite a number of familiar faces as guest stars in roles you wouldn’t expect. Lab Rats brought a new aspect to the networks and its sister, Disney Channel, where episodes would air on Saturday nights. It gave the creators and the actors a lot of room to explore this special world with three bionic super-human teenagers and their very normal step-brother.

“It was so fun playing a superhero, but also a genuine teenage girl all at the same time,” Kelli comments on her time as Bree Davenport. The family aspect on the show was very present between the actors in real life as well. “The guys were like brothers I never had, so it’ll be weird not having them by my side every day.” Instagram photos and videos were a constant when the cast filmed together on set.

Having filmed the last season of Lab Rats, Kelli remembers saying goodbye. “It was pretty tough… (Bree’s) become a huge part of me. There were so many tears on the last day of filming, not only because it was the end of an era, but because everyone I’ve worked with on that set is like a family to me. But I hope that Bree continues to live on, and our audience will remember her for all her adorable quirks and moments of triumph.”

On the bright side, it’s not goodbye to Bree Davenport forever. It was just announced that Disney XD will be doing a spinoff series of two of their most popular shows, Lab Rats and Mighty Med, following their strong ratings for the crossover special that aired this past July. The spinoff, named Lab Rats: Elite Force will combine parts of the main cast from each show and merge the storylines together to “assemble a super-sized series that will appeal to fans of both shows,” says Adam Bonnett, EVP, Original Programming, Disney Channels Worldwide.

Although Kelli Berglund will be joined by costar and close friend Billy Unger in the spinoff series, she’ll never forget the memories she had on the set of Lab Rats. “Well, after four years of filming, I have quite the collection of memories,” she states. “We’ve had some insane fight scenes that took so much preparation and hard work; and when you see the finished product, there’s such a sense of accomplishment,” she says with pride. “Any time I’ve celebrated a birthday on set, it’s been a day full of excitement and love… Oh, and the emotional scenes are moments I’ll definitely never forget!”

As with tradition when a series ends, Kelli was able to take some items from set. “I made sure I was able to snag some of Bree’s wardrobe! She had the cutest style by the end of season four, so I took the opportunity to take some home with me!” And surely, no one can blame her for that.

Since wrapping her successful Disney XD series, Kelli has already filmed a movie in Australia, titled “Raising the Bar”. Filming in Australia was “unreal!” Kelli exclaims. “It was my first time outside of North America… plus, I always wanted to go to Australia! The weather was actually way colder than I thought it would be, considering it was winter when I went. But the filming experience was amazing, and I met some girls that will be lifelong friends to me. I was able to see a rough cut of the film before I left, and I’m so thrilled for everyone to watch it!”

Kelli loves Australia but being away from home and her family, who she is extremely close to, was difficult. “At first, I was really optimistic about filming and staying focused on the task at hand,” she states. “Of course, I missed my friends and family back home, but by the end of the trip, I became pretty homesick. I started to realize that home was halfway across the globe, and it made me so anxious to come home!” Quick to add on, 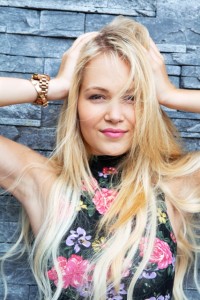 Kelli continues, “Don’t get me wrong, Australia was amazing and it was so fun to explore the country, but six weeks is quite a long time!”

No matter if she is in Australia, on set, or at Coachella, Kelli is seriously always stylish. “Aw, you’re too kind!” she had said when Teenplicity told her such. When it comes to fashion advice for her fans, she has a simple approach. “My advice is to take inspiration from everything,” Kelli begins. “Don’t think you have to stick to one kind of style all the time; mine is certainly changing all the time.” Continuing, she says, “Stay comfortable, but don’t be afraid to step outside the box. Your style is a representation of you – do not let anyone tell you how to dress. It is YOUR body.”

Besides acting, dancing is another talent of Kelli’s. Dancing since she was young, the passion she has for it has not only remained but also flourished through the years. “Dancing is something that gives me an almost indescribable feeling. It has been a part of my life since a very young age, and I’ve always dedicated myself to it completely,” comments Kelli. “It’s always been more than just a hobby. I’ll hear music when I’m in the car or in a grocery store and start making up choreography in my head. It’s a reflection of how I feel, and I can literally move any way I want to whatever kind of music. I want to relieve stress, express happiness, show anger – the list goes on and on.”

Though it may not be as high on her list of passions as dancing, singing is another way that Kelli is able to express how she’s feeling. She has lent her vocals to a special version of “Had Me @ Hello” from Girl vs. Monster when it played on Kickin’ It. Also, in her own DCOM, she shares a track with her costar China Anne McClain. When Disney brought back its “Disney Channel Circle of Stars” and immediately covered “Do You Want to Build a Snowman?”, Kelli’s vocals can be clearly heard during the verse. But don’t expect these to be the only times you’ll hear Kelli’s singing voice.

“I’ve been thinking about covers a lot lately,” Kelli admits. “I do really love to sing, and it’s something I’ve put on the back burner so that I can focus on acting. But I want the fans to hear me sing something that represents me and the singer that I am.” It will be worth the wait when Kelli does decide to release a cover, and the wait might not even be long at all! “I would love to explore music some more, so don’t be surprised if you see a cover posted soon!”

As far as her other projects go, Kelli has been pretty mum about it all.

“Yes, there are several projects in the works, actually! And you’re going to hate me because I can’t spill too many details about any of them,” she jokes. “But what I can tell you is that I recently booked a film that shoots in LA, and the script is absolutely amazing! It’s so cool. There’s another project that I actually can’t say anything about yet, but I know it’s going to surprise everyone and (most likely) make them very happy.” Hm, it seems that Kelli might have been hinting at the reveal of the combined spinoff series Lab Rats: Elite Force which everyone is beyond happy about!

Being a part of the industry is not an easy task at all. When Teenplicity asked Kelli what her biggest obstacle has been in life, she replied with, “This business, period.” Going on to explain, she says, “You will not find more rejection and “no’s” than in this town of Los Angeles. I started acting when I was nine years old, and being told “No” over a hundred times for a hundred different auditions isn’t the easiest thing to process at first. But as I became older, it helped me grow. There’s a reason behind everything, and all I could do was my best. I’m still told “No” all the time for auditions, but when you finally get that “Yes,” it’s just as exciting as it was when I got that “Yes” at nine years old.”

“I control who I am,” Kelli says, thinking about what she has learned over the past year. “There are so many external forces that attempt to influence me and tell me who to be, but frankly, I’m so sick of it.” Continuing on, she comments, “I have one life, and what I choose to do should not be questioned, because I’m looking out for myself! I want to pursue the things I want to pursue, and reach goals that I want to reach, and nothing is going to stop me. Self-love is so important; and not in a selfish way, but in a spiritual, humble way.”

The support system from her fans, KellBells, helps her out in a multitude of ways. Coming up with the name herself, Kelli remembers, “I wanted something creative! Plus, my nickname growing up was always Kellbell, so it’s like each and every one of them is a little piece of me.” She calls her support from KellBells “unreal.” Kelli states, “It’s a strange thing, having a big fan base of people who are so excited for everything you do and are constantly showing unconditional love and support. It’s like, how did this happen?” she asks, in awe. “It makes me stop and think about what my show has been able to do for teens everywhere – and now, what they’ve been able to do for me. I love them so much, and I couldn’t be more thankful for them. It’s also my favorite thing ever when I get to meet them in person; it’s like seeing your best friend.”

As a parting message, Kelli has this to say to her KellBells:

“YOU are the reason I do what I do. I hope we continue on this journey together, because I am always here for you, no matter what. We’re all one giant team. I love you guys from the bottom of my heart.”

Peyton Stilling on ‘Healing’ and 2021

Interviewing Peyton Still is like chatting with a friend. She’s casual and honest with her answers, bringing levity and jokes where she can and…