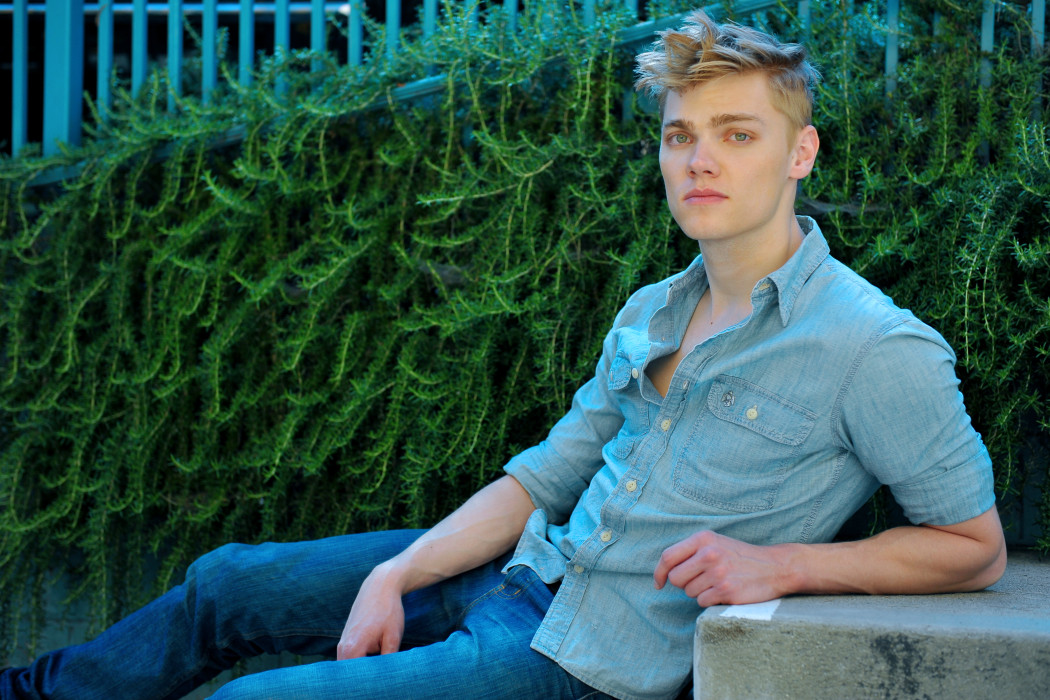 A Calgary native, actor Levi Meaden is just one more example proving that there must be something in the water in Canada creating so much talent. Even though as he got older Levi started to take focus in more behind the scenes camera work, his interest in acting essentially became his career, “I went to school in Prague and due to a lack of English speaking talent I found myself focusing on acting a lot. When I returned home, I began pursuing it full time. I had to forgo a lot of comfort in order to pursue it, working late hours to keep my days free and living close to broke.” Levi didn’t have to face the struggles of pursuing acting alone, however, he credited his friends and family because of their support of him and his dreams.

Since then, Levi has starred in hit shows such as The Killing, The 100, iZombie, Almost Human, and now Syfy’s Olympus. Typically leaning more towards darker roles, Levi commented on his preference choices by saying, “My interests seem to have always skewed that way. I love comedy too, but even the comedy I like tends to have a darker undercurrent.” He then added, “Not sure why that is… I should probably look into it.”

His new character Kimon on Olympus isn’t too far from the darkness either. Kimon starts off as Prince Lykos (Wayne Burns) scriber, meant to document Lykos important words. While Levi’s favorite thing about Kimon as a character is his loneliness, stating, “He wants so bad to be accepted. He strives to get to a place where he can garner some form of respect and when he finds it he will do anything to hold on to it. It is what drives him and it is what makes him dangerous,” Kimon appears to find companionship in Lykos. From the get go the two guys hit it off (spoiler alert: they kiss their first meeting) and immediately fans all across the web have found themselves worried about the fate of their ship considering Levi’s arc is only lasting six-episodes.

Olympus plays around with the classic Syfy formula of refusing to let concepts like reality interfere with their production. The show uses a great deal of special effects to bring the fantasy world to life. “It is a great exercise in concentration,” Levi said about acting with such conditions, “You have to be aware of where the camera is and the objects that will eventually be rendered on screen, but you also need to spur your imagination to evoke an emotional response.” Levi finds a fun in this challenge though looking at it more like an adventure than a chore, “It becomes a great test in your ability to meld the technical and the artistic together. I think, like myself, most actors enjoy the challenge.” He then went on to add,” However it can be difficult if the scene requires an opposing emotional force to play off of.”

Still, having a role on Olympus must have been a dream come true for Levi, who found himself lost in the world of Greek mythology as a child. Some of his favorites being classics such as 12 Labors of Hercules and Pandora’s Box. Levi mentioned how working on the show took him out of his falling out with it and brought him back to his love of Greek mythology, “The great thing about working on the show is that I got to delve back into the myths.” Aside from just the script, in general, he mentioned that just simply walking on set made him feel like he was transported back to the time period the story is set in.

Aside from Olympus, Levi is also starring in Alice in the Attic, an indie thriller coming out later this year. The movie tells the story about Levi’s character Jack when he goes to visit his aunt and discovers she has his cousin, Alice, prisoner in the attic because she’s suspected of having a mental illness. Playing around with the psychological aspects (and perhaps the dangers) of innocence, “The script has elements of ambiguity, which I always enjoy,” Levi admitted was his favorite thing about the story itself. “The characters are constantly called on to make tough decisions, sometimes these decisions work out, a lot of the time they do not. When the film ends, I think people will debate a lot about the morality behind it.”

With the amount of complexity that appears to come with the film, the challenges Levi revealed came while working on the movie adds to the dedication and determination of the cast and crew. With the film being shot on a tight budget, the cast not only had to be clever financially, they had to be clever with the way they used their time. “We slept and lived in the house the film took place in” he revealed, “and shot long days for the better part of a month. It was an extremely challenging shoot for everybody involved, but I personally discovered a lot during the process and I am super proud of all the work the rest of the cast and crew did.”

Levi’s discoveries are nothing to be missed. Levi described working with Alice in the Attic’s producer/director Jordan Anthony Greer as, “a very collaborative process.” Noting that even after calling cut on set, they’re still in communication. Although Levi has continued to pursue his career in acting, he’s not abandoning his love for being behind a camera like Greer, “I did train in writing and directing. I have also had a small hand in producing. It is something I see myself returning to, hopefully, sooner rather than later, but I want to feel absolutely confident in my ability before I do.”

Similar to the roles and projects Levi finds interest in, Levi looks at acting as a journey. “I hope to discover something new about myself through another person,” he said about what he hoped to get out of all of his roles, “ Acting tends to offer a bridge to understanding other people. Regardless of how distant they are to you or how horrible they seem, there is an essence of yourself you can find in them.” Whether his acting gives him a self-discovery or the role itself is about a journey, we look forward to going along for the ride.

Along with the interview, Levi gave us a few movie recs to check out (in no particular order):

You can keep up to date with all things Levi Meaden by checking out his Twitter accounts.

You can view the trailer for Alice in the Attic here and check out the movies BTS clips here.

Set in a dystopian near-future Los Angeles, Colony focuses on a family struggling to survive when their city is taken over under a new regime…