The young actress explores what fans can expect as she appears on the new seasons of Lifetime’s “Mary Kills People”, Freeform’s “Shadowhunters”, and The CW’s “The 100”.

At the age of 12, Lola Flanery is beginning to cement herself as a solid performer with a large spectrum of capabilities. Having already appeared in multiple episodes of “The Mist” on SpikeTV, she continues to expand her horizon as a new character on “The 100” while rejoining the casts of “Mary Kills People” and “Shadowhunters” in their new seasons.

Working with so many adults, Reese Witherspoon having been one as her mother in Home Again, Lola finds it a little weird at times to switch from working in an “adult world” and returning to school.

“My tutors on set are great and the discipline I need to have for working and learning lines helps me at school,” she explains of how she finds a balance between the two.

There is no doubt that school and on-set tutors offer a dose of normalcy and lightness to her day when the shows she appears on can deal with dark or difficult subject matter. One show in particular is Lifetime’s “Mary Kills People”. The series follows an ER doctor who, along with a colleague, participates in assisted suicides for patients who wish to leave on their own terms.

“The subject matter of the show, euthanasia and the right to die was something I wasn’t that familiar with,” says Lola. “Not sure I have all the answers on that, but it certainly made for some interesting discussions with my mom at the dinner table.”

In the upcoming second season, viewers will watch as a mysterious woman sets off an unforeseen chain of events in Mary’s life as she dives deeper in her illegal acts.

“Season two has a darker feeling to it,” adds the young actress. “I think we question Mary’s motives more than ever.”

Her motives may get a little more skewed as her youngest daughter – Lola’s Cambie – is now threatened by the woman who has popped into her mother’s life. “Cambie is Mary’s youngest daughter, so more than anyone, she is protected from everything going on,” says Lola on if her character’s life gets altered by the events taking place with her mother. “Her life is affected only so much in that her mom is mostly absent, but I feel like she is used to it. She takes comfort in her poetry and the cat.”

Following the premiere of “Mary Kills People” on March 12th, Lola’s next show “Shadowhunters” returns to Freeform on March 20th.

Dedicated fans of the series last saw Lola’s character of the Seelie Queen as she made a secret deal with Simon. As for what fans can expect when the show comes back, Lola isn’t giving much away. “Luckily,” she says, “I only play a Seelie, so I don’t have to tell the truth. You’ll have to watch and see!”

She stays tight-lipped on whether there will be consequences to her actions of season two or that deal with Simon. “Great question!” exclaims Lola. “All I can confirm is that those things get addressed in season three.” Another thing that fans can look to is more scenes between the Seelie Queen and Meliorn. “Yes! Which I love because Jade is awesome.”

One unique aspect of her character on the series is that she adopts an English accent once the cameras start rolling. This, according to Lola, was an idea since the audition process.

“When I auditioned for the role, they had me do both my normal accent and an English one, or my best version of.” She didn’t find out the final decision, however, until she walked in for the table read. “I’m glad they picked [the English accent] though, because it really helps me become the Seelie Queen.”

Behind the scenes, Lola is having too much fun with the cast to think about accents or Seelie Court politics. “Everyone is super professional but between takes or set ups we like to goof around,” she spills. “I honestly love shooting with everyone,” she continues. “One of my last scenes in season two had the Seelie Queen holding a meeting with Downworlders and Shadowhunters so everyone was there and that was one of my favorite scenes.” She already has a favorite scene in mind for season three but she reveals nothing. “I can’t tell you who with just yet.” 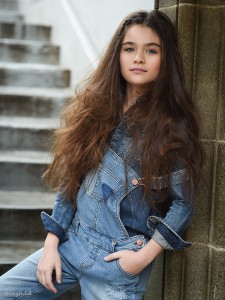 A month following the return of “Shadowhunters”, Lola joins the cast of “The 100” as Madi when season five premieres on April 24th.

Switching between filming for the two shows was natural for the actress. “I feel like it’s part of my job to hopefully be able to portray all sorts of characters.” She uses the similarities between characters to connect with them. “As different as Madi and the Seelie Queen are, I also see the similarities in how strong they are in their own ways.”

The sci-fi show with a loyal and passionate fanbase can expect more of what they’ve loved over the past few seasons of the show, but in new and interesting ways, according to Lola.

“People can change a lot in six years and to see how people have grown over the six years is going to be really cool for the fans,” she enthuses. “Like always on ‘The 100’, everyone is fighting for what they love and what they believe in, to survive.”

At the time of her audition, there was not much revealed about Madi yet. “Wanting to play the part came from watching the show and becoming a fan,” admits Lola. “Learning more about her as the season went on just became the most awesome icing on the cake.”

What intrigues fans is how her young character will fit into the new world. Where Grounders had been taught from birth to fight and obey their commander, Ark survivors found themselves defenseless and struggling to survive as their main purpose was to teach and live until the next generation could go to Earth.

“Madi is a kid, much younger than the 100 were when they came to the ground, so she has a different perspective,” says the actress of her character in comparison to others on the series. “As to whether she is the light in the darkness, this is ‘The 100’ – nothing is ever just black and white.”

Focusing on the fact that Madi really is a kid and had been raised by Clarke following Praimfaya, the teaser for season five released at San Diego Comic Con showed that Clarke would tell the younger girl stories of her friends. “Madi has heard about these people her whole life from Clarke’s stories, and from those stories, she envisions them a certain way,” explains Lola. “They’re not always going to live up to that picture she has created in her head, for better or worse.”

Lola teases, “Like the rest of the people important to Clarke, Madi knows about Bellamy. What she has been told will inform her opinion. Ultimately, how they meet and the circumstances that follow will really define whatever relationship they have.”

With more in-depth knowledge of the characters after all they have been through, Lola thinks over who she would want with her if she were suddenly thrust into the world of “The 100”.

“I’m sticking with Clarke,” she begins, “because she is Wanheda!”

However, don’t expect her to pick a favorite character other than her own. “Can I just say Madi?” she asks with a smile.

It comes as no surprise as, when asked which role of hers overall is her favorite, she says she feels like a mother being asked who her favorite child is. She does add that for prep with each character, “I just ask a lot of questions!”

Her fans took a note from her book as they prepared dozens of questions for her to answer, which she couldn’t help but gush over.

“The biggest THANK YOU in the whole wide world!” she exclaims to her wonderful fans. “I feel the love and I send it right back!”

Don’t forget to catch Lola in these shows as they return to your television screens!

-“Shadowhunters” returns to Freeform on Tuesday, March 20th at 8pm.

***ABOVE PHOTO CREDIT TO Erwin Loewen