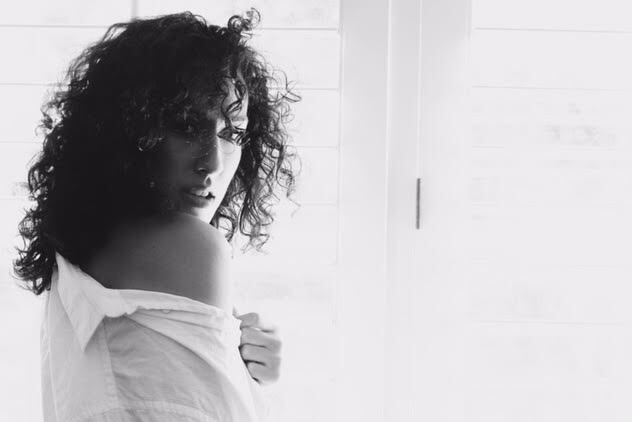 When she started playing piano at the age of six, Marga Lane was hooked. A graduate of Berklee College of Music in college, her love for music stook with her as she made the move from New York to Los Angeles to pursue her dream of being a singer/songwriter. In 2013, Marga released her first EP, Expressions, a seven track extended play. Earlier this month, Marga showed a different side of her when she released her second EP, Undressed, which consists of five acoutic guitar and sultry vocal driven tracks.

“Oh, I’ve grown so much,”  Marga reflects on the differences between Expressions and Undressed. While Undressed offers a more chill, folk approach to music (or country-ish as Marga describes it), Expressions is more upbeat and pop centric, “I know more of who I am, where I want to go musically and what I want to express musically. I finally found My Sound. My voice has matured as well, if you compare the 2013 EP to the “Undressed” you’ll see the growth in my songwriter and vocal abilities.”

While there are differences in her sound, they both share a recurring theme that Marga says she finds herself going back to naturally, “I love, love and I love heartache, those are two emotions that are so universal and I enjoy finding new ways to write about love as a theme.” On another note, however, Marga acknowledges “pure, unconditional love” as a surprising theme she’s written about on Undressed. “I’ve written love songs before, but when I wrote, ‘Mine’ and ‘The Way I Know How’, it was a different feeling,” she explained. “I guess because they are about someone I love very much. I still get choked up when I play the songs live sometimes.”

Marga shares that the effort that has gone into her music has been a work in progress for awhile. “I had everything planned to a T when I was in high school, but things never go as planned,” Marga answered when I asked her how to got to where she is and what kept her motivated. “It has been a very tough path, but I’ve grown and learned so much from doing it on my own. Music and the fans have kept me motivate. Every time I felt like I wanted to quit, I got a message from someone in Europe, or someone here in the states that reminded me why I do what I do.” This reminder is what helps keep her going, “I’m meant to share my talents with the world, and if I only get to share it with a few people, that’s more than enough.”

She has also found inspiration from other artists stating The Spice Girls as the first artist that made her want to pursue music, “I think subconsciously though, it was Michael Jackson. My parents have videos of me dancing and singing to ‘Thriller’ when I was 2 years old. But definitely The Spice Girls. I wanted to be Scary Spice and perform all over the world for millions of people.”

Looking back on her lyrics, Marga describes her most autobiographical lyric to come from her Undressed EP out of the song “Forgiven” but not in the same context as the song. The lyric goes, “And the road to where this led, I paved with good intent.” She states that the lyric is autobiographical to her moreso careerwise, “I paved this career path for myself with honesty and talent and open-heartedness and ‘good intent’ and I have met so many challenges and walls along the way, but I’m still here, still going.”

“Forgiven,” tells the story of a heartbreak from the perspective of the guilty person in the relationship. “Originally, it was going to be, ‘You don’t deserve to be forgiven,’ but I decided to switch it up and say, ‘I don’t deserve to be forgiven’ taking on the role of the guilty person. The idea came from a real life experience, except I wasn’t the guily person,” Marga explains about how the song formed. “I already had so many songs about heartbreak where I wrote about being the ‘victim,’ if you will, that I wanted to change it around and try something new. I personally feel like it gives the song more life and emotion instead of being accusatory or another angry chick singer.”

Hoping that listeners hear talent and are entranced with the emotion, be that happiness or sadness, when they hear Undressed, Marga addresses the deeper meaning and reasoning for why she titled her EP, Undressed. “It means who you are at your core,” she begins. “You can dress yourself up with the fancciest clothes and best make-up but that doesn’t make you who you are, they are just accessories. My music on this EP is stripped down or rather, ‘undressed’ for a reason; I wanted the listener to hear the lyrics and the emotion through my voice, not all the extra. I love listening to acoustic performances of my favorite songs, there’s so much emotion behind them that sometimes doesn’t get accounted for when you hear a heavily produced version.”

As we prepare to close out our interview, Marga offers words of advice, including advice to young artists for what they should do as they prepare to graduate. “Learn as much as you can, filter it out and take what you need and enjoy life before the, ‘real world,'” she says. “Also, hone your skills and your craft. Some people will tell you it doesn’t matter how talented you are, but I always say, I’d rather be talented at something and have three followers than untalented with nothing to offer the world and a million followers.”

She notes the importance of not ony being an artist, but of caring about the art that you put out into the world. “I think the power of art is that it can heal, it builds meaning from this [out of] air. The power of the artist is that they can make a positive change and stand up for whatever it is they believe in. I work with Musicians On Call and I can see how much healing power music has on these patients I go and play for. It brings laughter and smiles to their faces, makes them forget about their current situation and live in the moment.”

Aside from her work with Musicians on Call, Marga says that she’s currently working on booking gigs over the next couple of months and that she hopes that during the meantime, she hopes that the world stays knowlegable, open-minded, and spreads love.

These are a few of the songs I’ve been listening to recently….

Say You Love Me – Jesse Ware

Hymn For The Weekend – Coldplay