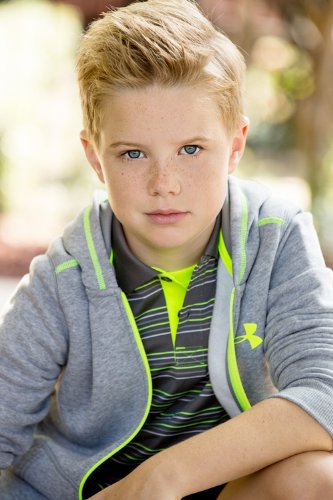 For a young actor, landing their first major role is one of the greatest feelings in the world. In the case of Matthew McCann, landing the role of Teddy Burns on CBS’s newest show “Man With A Plan”, it made him feel like the luckiest kid in the world.

Starring opposite of Matt LeBlanc [‘Friends’], Matthew plays one of the Golden Globe Award winner’s three children. The series focuses on LeBlanc’s character Adam who suddenly realizes his children aren’t as angelic as he believes when he spends more time with them after his wife [Liza Snyder, ‘Yes, Dear’] returns to work.

“Well of course he was on ‘Friends’ and I watched it,” Matthew says, noting one of LeBlanc’s most famous roles. Having completed nine episodes so far, the young actor says that he, Grace Kaufman [‘The Last Ship], and Hala Finley [Letters from a Father] haven’t looked at LeBlanc and freaked out. In his best high pitched voice, Matthew demonstrates, “Oh my gosh, it’s Joey from ‘Friends’!” Instead, he says, “We’ve been thinking of him as our dad because from all the times that we have had our connecting moments, it’s made him feel like a real dad for us so we think of him as a real dad.”

“I’m in a family of five and on the show, there’s a family of five,” he begins and mentions that he has two siblings in real life too. “My sister, she is the middle child and surrounded by two boys but in the show, I’m the middle child surrounded by two girls. I’m kind of putting on my sister’s shoes.” In addition, he says he and his two on-screen sisters have to think together to get things done. “In real life, if [he and his siblings] put our minds together, we can get anything done.”

A laugh breaks through Matthew’s answer of ‘Yes!’ when asked if his role has made him go easier on his sister now that he knows what it’s like. “At times, having the younger sibling can get surprisingly annoying,” he observes. “Since I’m the youngest child, at times I’m like, ‘Okay, I’ll go do this,’ and give her some time to herself because that’s basically what happens on the show. I’m like surrounded and I just have to squeeze in because I have no other guys except for my dad. I have to go do my own thing.”

Doing what he wants to do faces an obstacle in the form of LeBlac’s character. While their mom has been their main parental supervision while their dad worked, the children’s ways of life are about to drastically change.

“They have two different ways of parenting,” Matthew explains. “Our mom is more of ‘You guys go do whatever you want, I’ll pick up your stuff!’ Dad’s more of a ‘Get this done! We’re not going to let you put all this stuff on the floor. I’m going to teach you right!’ So [the kids have] got to get with his process and get out of our mom’s.”

Their dad, according to Matthew, is a bit stricter which causes the siblings to work together a bit more. “He’s thinking up strategies to get us to do what he wants and we have to think up strategies to get out of those things.” With a laugh, he explains, “That’s kind of why it helps to have two other sisters so we can always work together.” His smile is evident through the laughter as he manages to say, “We have the youngest one that can be like the pouty face and then we have the older one who can be like, ‘I’m gonna go and run off!’ And then you have me, and I’m going to sit back and watch.”

Matthew calls landing his role on “Man With A Plan” as one of his best moments of 2016. “I’ve had a lot of amazing moments in 2016,” he says with a small laugh, “but so far, my favorite part has been getting the show and meeting everybody and filming all these episodes. It’s just been a lot of fun.”

Part of that fun can definitely be attributed to filming in front of a live audience. He recalls the experiences in front of them as enhancing the process.

“Even though most of the jokes are for adults, they’re really funny,” he giggles. “And when the audience laughs, that makes us do better. And with the audience there, that helps us so much because they get to tell us what we need to change with the amount of laughter that they’re giving us or what we need to keep the same.” He tells Teenplicity that this happens when it’s felt that more laughs can be gotten out of a particular joke. “Then we change that line and make it a lot more funny. The audience always helps us so much with having them there, letting us feed off their energy.  That’s just always great. I love having the audience there.”

Describing the show as funny, entertaining, and like a real family, Matthew expresses that if he could have anyone guest star on the show, he would go with someone from his TV Dad’s past.

“There’s a lot of people that are amazing actors that would be amazing to have guest star,” he says before pausing to think. “It would be really fun to have another member from ‘Friends’,” Matthew decides – sort of. He couldn’t pick which one he’d prefer most but says, “It would be really funny since Matt and them [are close]. They could have an episode [together]!”

And if an episode were to just focus on Teddy? Well, the young actor quickly decides upon it taking place at a gaming convention.

Off-screen, Matthew loves to volunteer. Through his father’s company and school, he helps raise money for different organizations, like the Wounded Warrior Project. “We’ve also helped feed people that need the food,” he says. “We’ve helped kids have a nice Christmas. It’s been amazing. I love volunteering.”

Not only does Matthew hope that his growing fan-base starts to help out more too but he hopes that they stay true to who they are.

“Be yourself,” says the actor confidently and proudly. “If anybody judges you – who cares! Be yourself.”

Be sure to catch Matthew McCann on his new show “Man With A Plan” premiering tonight on CBS at 8:30PM!

YaYa Gosselin Shares How ‘We Can Be Heroes’

On Christmas Day, Netflix dropped the highly-anticipated We Can Be Heroes directed by Robert Rodriguez. Created as both a stand-alone and a sequel to The…