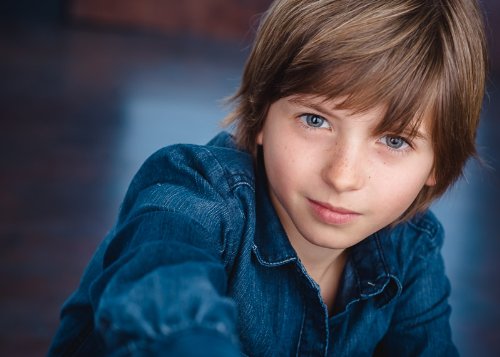 “Safe” is not a word that commonly describes acting. The trials and tribulations of auditions, with more ‘No’s than an actor can shake a stick at, and the status of some projects flatlining from critic and public response, the entertainment industry is mostly associated with the word “risky”. Yet for the family of 12-year-old Oliver Bell, “safe” is the first synonym that comes to mind.

The young actor hails from a family of British World Champion racecar drivers. Though he admits thinking briefly about joining the family business, acting took his interest. “I never intended on being an actor,” Oliver admits. “I was starting to lose my self-confidence one day in school because of this kid who was pushing me around. My mum found me an acting coach and it really helped me regain my self-confidence and I just decided to try a few more sessions and then I was off!” He explains how once he started doing it, he really enjoyed it.

Was his family disappointed with the news that acting took his heart? “No, not at all,” he says with a laugh. “Not at all. I think they’re happy – a lot more happy because it’s a lot more safe.”

One of Oliver’s most notable roles is the dark character of ‘Little John’/’The Dark Lord’ on WGN America’s hit series “Salem”. The end of season two saw the death of his mother, the only one who could really stop him as he becomes a vessel of the devil.

“Over the course of the seasons, he’s definitely evolved into a stronger, more powerful character,” Oliver describes of his character’s growth. “He’s really, really evil,” he says, laughing softly. Quick to add, he says, “But in a clever way! He’s evil-smart. There’s a lot of moments like that. He doesn’t have a lot of sympathy.”

Oliver explains of ‘Little John’/‘The Dark One’ in season three, “He’s definitely more in control now. There’s not a lot of enemies or people that can really get in his way so he’s pretty powerful. There’s speedbumps along the way but mainly he’s pretty in control.”

“I’m filming it so it doesn’t really get to me when I’m actually filming it,” he says of some of the scenes that have creeped and scared others. “But when I watch it back, definitely, it kind of creeps me out a bit.”

With a small laugh, Oliver is able to reassure that things are much lighter and happier behind the scenes. “My costars and everyone is amazing, they’re so nice to me,” he says. “We all work together as a team and it’s not at all what it is on the screen.”

What is on the screen this season is more of Oliver’s character as he plays an instrumental part in terrorizing the town and its people to reach his goal.

Oliver admits, “I’m most excited for fans to see the Dark Lord’s way of accomplishing his plan and making it flawless and getting everything out of the way that might be a distraction or a flaw in the plan.”

The 12-year-old actor also finds himself on the set of HBO’s newest hit show, “Westworld”. He describes it as a “Western meets Sci-Fi action packed drama series” that is set in a theme park for wealthy tourists. The 2016 series was created by Jonathan Nolan [“Person of Interest”, The Dark Knight] and Lisa Joy [“Burn Notice”], with big-name Sci-Fi producers like J.J. Abrams [Star Wars: The Force Awakens, Super 8] involved with the show. It is inspired by the 1973 film of the same title written by Michael Crichton.

“I quite like doing my dramatic, Sci-Fi thrillers!” Oliver says excitedly when Teenplicity asked if he’d like to explore other genres. “I mean, it’s kind of how I am,” he explains. “But I would definitely like to try a bit of comedy, that sort of side as well. And doing what I do.”

As Oliver continues to work on his craft and grow, personally and professionally, the young actor thinks for a moment when he is asked about future opportunities. He comes to the conclusion that he’d like to try out some comedic roles. “Outside of acting, I also enjoy rock climbing and surfing, stuff like that. So I’d like to eventually get a big film that involves any of [those] things that I like to do and explore different genres.”

One genre in particular might include action as Oliver reveals that he really likes that genre of film and calls himself a “bit of a nerd” for comic books. “I quite like The Dark Knight series so I’d probably be Batman. [The series is] so action-packed and clever.”

Oliver even picks Christian Bale, the star of DC’s The Dark Knight film trilogy as an actor he’d love to work with as he gets older.

“I’ve really enjoyed working with Anthony Hopkins [The Silence of the Lambs]and Ed Harris [A Beautiful Mind], everyone that I’ve worked with on ‘Westworld’. I definitely would like to do something with Christian Bale, because as I said before – The Dark Knight,” he says in pure joy, like it’s the most obvious thing in the world. The 12-year-old even explains that he’s watched some of Bale’s other films, making him a big fan, “Maybe Robert Downey Jr.,” he adds.

Teenplicity mentions that maybe in the future, Oliver can star in a brand new superhero film with both stars, to which he excitedly exclaims, “Yes!”

In the meantime, Oliver will be auditioning on top of his current work. His excitement about both is constant and never ending, perfectly demonstrating the joy he has for what he does.

For Cree Cicchino, her start in the acting business was just like her home city of New York – big and in great fashion….