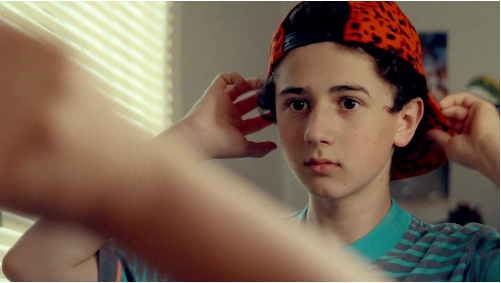 Inspired by Manson’s upbringing, the character of Daniel is played by David Bloom. “He’s a wonderful director and it was a great experience having him on set,” Bloom commented when asked about playing a character based on the director/writer. “He definitely helped a lot with shaping the character because it was him so he knew what choices should be made and how the character should act and react. It was a wonderful and helpful experience.”

The title of Wannabe stems from Daniel’s struggle with deciding his identity, “…my character, Daniel, kinda wants to be someone he’s not to impress and make this girl like him, so he tries to be this really cool kid when he’s really not.” Although David hasn’t gone through the same things as his character, he admitted that he would probably make the same choices if he were in that situation. He also saw himself in Daniel, “I like who this character is, I find him very similar to me and I can relate to a lot of what the character is going through and it’s a really, really good part.”

“Even though it took place back in the 90s, I feel like it’s a very true concept that we have even in today’s world, it’s a very true story,” David commented on why he believed Wannabe was an important story to tell in the current day. “I hope they enjoy it and I hope that they realize what happened in society both, back in the 1990s and today, and I really hope that they take away to push who we are aside and we should all just get along.”

David Bloom also starred in the Netflix series Wet Hot American Summer: First Day of Camp as Kevin, a shy and awkward kid struggling to fit in with his other campmates. “I don’t see myself similar in kind of like the nerdy sense,” he answered about playing those characters, “but in these last two roles, I do feel similar in like how they grew up. Well, not really how they grew up, but who they are, what their values are. I guess I’m just really drawn to that role.”

“It’s a pretty big transition because you’re going from this much smaller community and much smaller campus to this big, giant, more independent high school,” he spoke to me about how it is for him to go from middle school to high school. “And it’s definitely different with working on shows because I still have to check with my teachers about homework, but there’s more independence with this now. Like I have to do more my own because it’s no longer middle school, it’s now high school.”

He’s not the only one in his family who is an actor. His younger sister, Rebecca Bloom, recently starred in the latest Peanuts movie. “We both kind of, like, taught each other. She’s done shows I like and I’ve done some shows she likes.” He added, “Me, being the older the sibling, she learns more from me, but I still learn a lot from her.”

The feature film Wannabe is scheduled to shoot this Summer in New York City.

For the youth of today, YouTube has become a means of self-expression. Whether it’s through musical posts, comedy sketches, fashion and beauty tips, or…