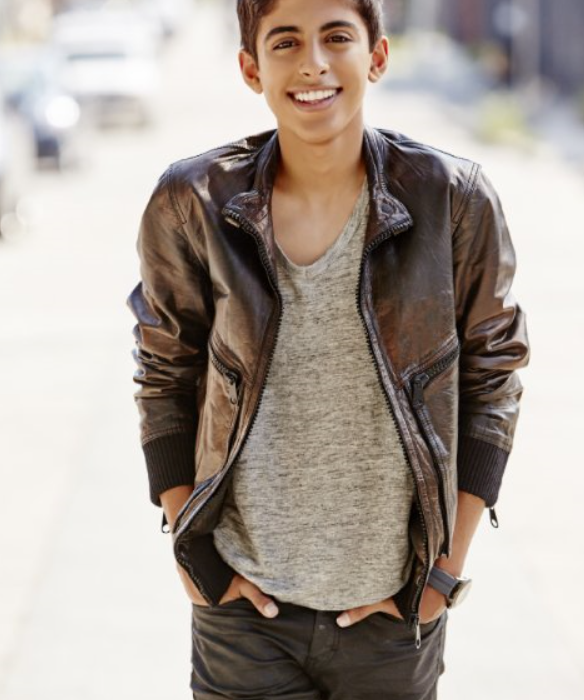 Landing a role on the Disney Channel is practically every child’s dream. The young stars on the network are being given a once in a lifetime opportunity to join a world renowned company that is sure to give their career the firm foundation needed to continue on in Hollywood. How could Disney possibly one-up even themselves? For Karan Brar, it was like this: landing a role and finding out that he’s the first-ever Indian American actor to star on a primetime show on Disney Channel.

Admitting that he didn’t realize that he was the first Indian American actor to claim such a title until he had gotten pretty far into the first season of Jessie, Karan doesn’t feel any added pressure.

“I feel the opposite actually!” he exclaims. “I think it’s both cool and exciting to be able to help further introduce my culture on Disney Channel as well as be able to expand the audiences’ cultural boundaries.”

Not only is Karan helping to introduce his culture to a widespread audience but he’s also giving other Indian American children the ability to connect to a show that regularly represents them through one of its lead characters, something Disney had not done prior with the Indian American culture.

“A few times families have told me how they really appreciate the Indian culture and community being represented on Disney Channel,” Karan says. “It means a lot to parents and their kids that they can watch the channel and have a character to relate to.” It’s probably one of the best parts of being on Disney Channel as Karan goes on to say, “Hearing these stories makes my job ten times better.”

He is able to see the hard work that goes into properly representing the Indian community in a manner that is best for both the show and the people it represents. “What’s great about the project I’ve work/worked on is that even though they’re predominately comedy, we always make sure the Indian community and culture is represented in a positive, respectful light.”

Following the completion of his first Disney Channel series Jessie, Karan was one of three main cast members to join the spin-off show Bunk’d. Nearing the premiere of the season one finale, Karan looks back on the growth of his character Ravi.

“Ravi is an amazing character,” Karan says, and opts not to change a thing about him if he were ever given the chance. “Though he can be a bit weird and goofy at times, I think that’s what makes him so special.”

Karan acknowledges that Ravi has grown in multiple ways since his first introduction years ago. “When we first met him, he was this curious, eager, new kid but now on Bunk’d, he’s evolved into this smart, confident, mature young guy. I really can’t wait to see where we take him this next season.”

Though not much has been said about what’s to come on the second season, Karan has a few ideas up his sleeve of what he hopes to see.

“I want to get even wilder this time around,” he says. “We did some amazing episodes with a fake lake and fake skydiving this past season so I’m hoping we can do something just as crazy this time around.”

For more than five years, the main focus of Karan’s career has been around his Disney Channel shows. During that time, however, he was also able to star in the series of movies focused around the books “Diary of a Wimpy Kid” as well as the Disney Channel Original Movie Invisible Sister.

“I have to say I gained a lot of experience about the work space. Since we have such a great crew and cast, I’ve been able to learn a lot about how to be professional on a set as well as how to be more comfortable on one,” Karan says of his time with Disney so far.

When Bunk’d finishes in the hopefully far off future, don’t expect Karan to sit back and relax for a while. A self-proclaimed workaholic, he says that he would definitely want to go back into movies so he could switch things up! “Working on a sitcom is amazing but I also wanna dabble around a bit,” Karan says.

As for what kind of projects he’d be interested in, Karan says, “At the moment I’m really interested in doing drama for a future project. I’ve been doing comedy for a bit now so I think it would be nice to change it up and work on drama for a while.”

Karan points out that spending most of his young career in Hollywood as a comedy actor can get him type-casted at auditions. However, he takes it in stride and uses it to his advantage. “Sometimes in auditions there can tend to be a stereotype that I’m only good at comedy or I can only play the nerd but regardless I think it’s fun to sometimes go into that casting room and prove them completely wrong.”

When he’s not starring on his second hit Disney Channel show or playing video games, Karan is passionate about his position as ambassador to charities like The School Fund and The Thirst Project.

Having gotten involved with both in similar ways, he hopes that his involvement with these charities will inspire his fans and their friends and families to make a change.

“I talked with both of the charities CEOs and immediately [wanted] to help out with their causes,” he says of how his involvement began. “Though both [of their] work is predominately overseas I do what I can to spread the word over here.”

And he does so constantly. “I think it’s easy to get lost in all the negatives of the world but working with these charities has shown me how much good is out there. It amazes me to see how many people out there are selfless and constantly wanting to give back to those in need.”

Through everything he has experienced over the past few years, Karan says he learned that he is capable of whatever he puts his mind to. “In the past I tended to doubt myself but I learned that if I put in the work, I can do anything.”

Hard work and determination has helped bring Karan to where he is now, as well as his passionate fans, to whom he dedicated this message to:

I love you guys. I truly can’t thank you guys enough for all you’ve done for me and I can’t wait to see what we accomplish together in the future!

New episodes of Bunk’d air on Friday nights at 8PM on Disney Channel!

**Above photo credit to Wes Klain

‘Before I Fall’ Movie Review

The newest YA adaptation finds itself as an interesting mix between Mean Girls and Groundhog Day, with a stirring performance by Zoey Deutch and…