For the youth of today, YouTube has become a means of self-expression. Whether it’s through musical posts, comedy sketches, fashion and beauty tips, or even just a daily vlog, millennials have found their spot to thrive – the Internet.

Niki and Gabi DeMartino, twin sisters from Bethlehem, Pennsylvania, were not new to making videos when their first one went live on YouTube in September 2012, having done homemade music videos with their friends since they were in eighth grade. However, their first post on YouTube was a “Demi Lovato Inspired Curls” hair tutorial that was done by Niki.

“We would say [to our younger selves] to start YouTube as a passion and hobby. We started not knowing what would come of it, solely doing it for fun. To this day, making videos doesn’t seem like a job. It’s such a blessing to be able to say this is what we do for a living!” Niki and Gabi say. As they think back to their older videos, the duo admits with a laugh that there are always things that they would change, though nothing huge. “We’re perfectionists but sometimes we notice things subscribers wouldn’t even notice and they probably wouldn’t even care about.”

Showcasing in one of their posts “REACTING TO OLD VIDEOS”, the girls watch and comment on old home videos they had made from middle school through high school, before joining the streaming site. They critique things like their use of a fan in every video as well as dance moves that they realize now were questionable at the time.

With both girls having different styles, it allows them to create videos that subscribers can pick and choose from like what kind of beauty video they want, whether they prefer more of a girly-girl look or a hipster one. Since their first videos, the duo has been able to branch out with the content they publish, while still staying true to how they started.

“We love music video covers!” the girls reveal, when asked what type of video they prefer to record. “Out of all the types we do, we always wanted to break back into singing. Before this channel started, we had another channel called ‘00remakegirls’ where we did covers but then this channel kind of blew up and we lost track of the singing. So [we’re] ecstatic to be able to do this on our main channel and have amazing feedback from our subscribers!”

Amazing feedback from their subscribers comes in more than one way, whether it’s through the comments section on a video or hitting the goal of a certain number of likes on a post in one week. Most recently, feedback from fans blew up their comments as the girls and their friends took on the personalities of favorites celebrities in their parody video, “Celebrities at Prom 2016!”

The comedy sketch is all about what would happen if famous celebrities like Miley Cyrus, Kylie Jenner, Ariana Grande, Taylor Swift, and more went to prom together.

“As for me, I made sure I didn’t spray tan for two weeks ahead of time so I was the actual skin tone of Taylor!” Niki says of preparing to step in the shoes of Taylor Swift for the video. While Niki took on the role of the country singer, Gabi portrayed Ariana Grande to no surprise, as she is a big fan of the Dangerous Woman songstress and is often thought to look just like her.

“I am a huge Ariana fan, and [I] love her style so much already that it was very easy for me to impersonate her!” Gabi recalls. “I already have a lot of similar clothing pieces she already has, so it was easy! But I did have to watch a few videos to study her expressions.”

The 21-year-olds have yet to receive any feedback from the celebrities parodied in the video though they intend to keep trying. “We won’t give up!” they exclaim.

If they had the chance to take any celebrity to prom, Niki would pick Justin Bieber, though Gabi had some trouble choosing just one. “Adam Levine or Shawn Mendes,” she says.

“Dancing for sure,” Niki mentions as her favorite part of prom. “I remember my junior year I had a mermaid dress with this crazy floral pattern all over it. Now I look back and wonder what I was thinking.”

Gabi looks back on her prom dress with fonder memories. After telling Teenplicity that getting ready was her favorite part of the prom experience, she says about her dress, “I remember I had this coral dress with side cut outs and it’s still my favorite! Friends still ask to borrow!”

For fans whose proms are coming up, Niki and Gabi offered a piece of advice.

“Don’t stress!” they say. “It’s a night you should look back on and remember what a great night it was. Don’t let the little things ruin it.”

With prom practically signifying the end of the school year and the beginning of summer, new fashion trends are on the horizon, or some trends are reemerging. Niki and Gabi are particularly excited for the choker trend that is coming back in style. “We had a bunch in the ‘90s!” they recall.

Creating a career out of YouTube, going to college, and managing a social life is no easy task but the twin sisters seem to conquer it as such. In addition to learning how to have time management and being able to travel, the duo doesn’t see much of a change in their lives. “We still see [YouTube] as something fun and something we love so if anything, our lives have become a little more hectic in an amazing way!” Niki and Gabi express happily. “Not many people can say they do what they love.”

Coming up next weekend for the girls are two meet & greets and performances for fans in California – their first events on the West Coast.

“We’re most excited to interact with our subscribers on an intimate level. We feel like we show ourselves online but they don’t see our whole selves until they meet us in person or see us perform live.”

Niki and Gabi are tight-lipped as to what is coming for the rest of 2016, saying, “[It’s] top secret stuff which is super exciting and no one is ready for it!!!”

While fans are left waiting for the news to drop of what exactly Niki and Gabi are working on, they can rewatch their favorite YouTube videos of the twins on their channel NikiandGabi. 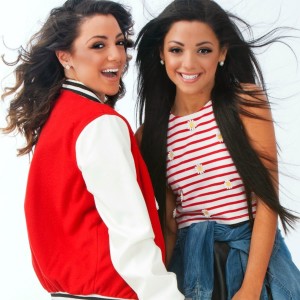 If you haven’t already, be sure to check out Niki and Gabi’s parody, “Celebrities at Prom 2016!” above!