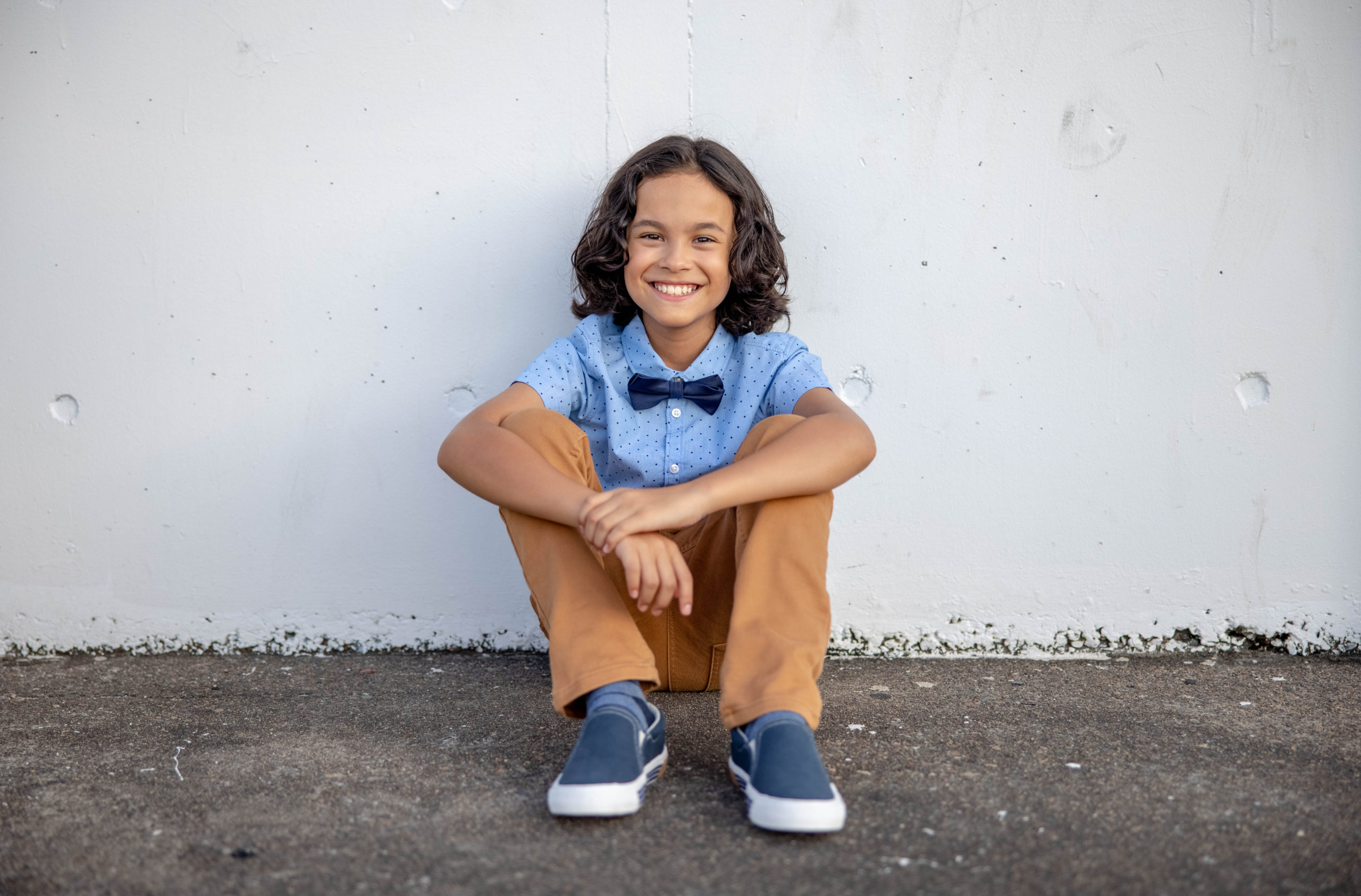 If 2020 gave the world a reminder of anything, it is the importance of family. To have the love and support from family as one goes through life’s challenges, whether one’s family is biological or one that they found and nurtured, is so important.

Focusing on title character Punky all grown up with a family of her own, the new take on the 1980s series Punky Brewster harnesses that familial focus once again.

“It’s really all about family,” says Oliver De Los Santos of the new series with the same new. He plays Daniel, one of Punky’s two adopted sons. “In the original, it’s Punky and Henry, and they become family. This time it’s Punky as an adult with her own family, but it’s not the sort of family that we see on TV.”

The young actor explains how in addition to Daniel, Punky has an older daughter and a second, older adopted son. Their family keeps growing, though. “We meet Izzy who reminds Punky a lot of herself when she was young. She joins the family, and the show talks about lots of important issues that happen in real families. I think it’s really heartwarming and fun to watch.”

Punky Brewster will also once again bring the spotlight to discussions on fostering. While most shows introduce fostering or adoption when the child is a newborn or toddler, this series rings true of the original in that its focus is on older children in the foster care system. “I hope [Punky Brewster] makes kids that are being fostered realize they’re not alone. There are so many foster kids all over the world so I think it’s important for TV shows to show that it’s a normal part of life and that lots of kids need a family to love them, and that it’s not their fault that they’re in that situation,” Oliver says of the impact he hopes the show has on viewers.

“It’s similar in a lot of ways, but obviously it’s a modern version,” he says of how the show compares to its predecessor. “Both have a different storyline or lesson in every episode. To me, it still has that same nice feeling when you watch the show. I think it’s a great show for the whole family and I can’t wait for the world to see it.”

While he finds it cool now to see references made to the original series in the new Punky Brewster, Oliver initially didn’t know much about the 1980s hit. “My mom told me about it, but the original isn’t available here in Australia so I couldn’t watch it until I went back to America to film the rest of season one.”

The young actor laughs as he recalls watching the original show on Peacock once he returned for filming and expresses, “I loved it!” 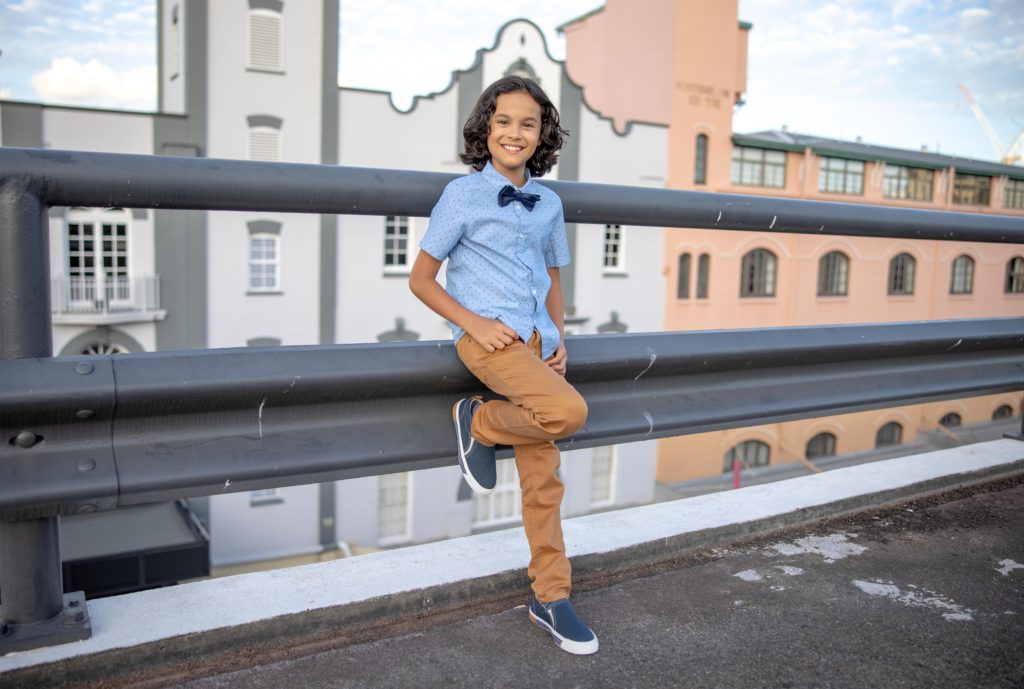 When TEENPLICITY spoke with Oliver earlier this week ahead of NBCUniversal’s Peacock streaming platform debuting the series today, he wasn’t nervous in the slightest.

“Honestly, I’m so excited I could scream,” he says with a twinge of laughter in his voice. “It’s hard to believe that our show is about to come out for every to watch. I don’t really feel nervous, but definitely excited.” Asked to pick what he’s most excited for audiences to see, he laughs as he declares, “I can’t pick one thing! I’m just so excited for the whole show and for everyone to see Punky coming back again and for new people to see how great it is.”

While Oliver hopes everyone loves the show, he’s focused on enjoying having the series premiere and all the cast and crew’s hard work being out for the world to see. “I hope they like it, of course, I know there are a lot of fans of the original show who are waiting to see what the new one is like. So I really hope they love it when they see it; I think they will.” He shares wisdom beyond his 11 years of age as he continues, “There will always be some people who don’t like things and that’s okay. That’s the same for everything.”

With Oliver’s mind set on the excitement of the series premiering, he eagerly discusses his character Daniel.

“He’s neat, clean, tidy, and really smart,” he begins to say of his character. “The exact opposite of Diego [Daniel’s brother], and they share a room so you can imagine that gets interesting.” The young actor laughs for a moment as he thinks of the shenanigans that ensue before growing more serious. “What makes [Daniel] different is that he sometimes does things that people think are too girly for boys like wearing eyeliner or painting his nails. But what I love about him is that he doesn’t care what people think and he just does what feels right for him.”

There’s a hint of pride in the young actor’s voice as he thinks of his character, saying, “You wouldn’t think so, but Daniel’s actually a really strong kid and I feel really honored to be able to play him.”

It is also interesting for him to play a character so unlike himself. Relaying that he and Daniel aren’t very similar, Oliver jokes, “His room is way cleaner than mine for a start.” He then goes further, describing, “[Daniel] likes to wear more formal clothes a lot of the time but I prefer more casual stuff like band t-shirts and my bellbottom jeans. Even though we’re different, I still think he’s a cool kid and I’d probably be friends with him if he were real. Differences are what make us interesting.”

The differences in personalities in Daniel’s family really becomes apparent with the addition of Izzy, a foster child that reminds Punky of herself. “Izzy makes Daniel the middle child and he starts to feel like Punky doesn’t notice him anymore, but she really does,” he says of how his character reacts to the family’s new addition. He adds, teasing, “There’s also the issue of where Izzy goes to seep and that gets interesting for a while.” 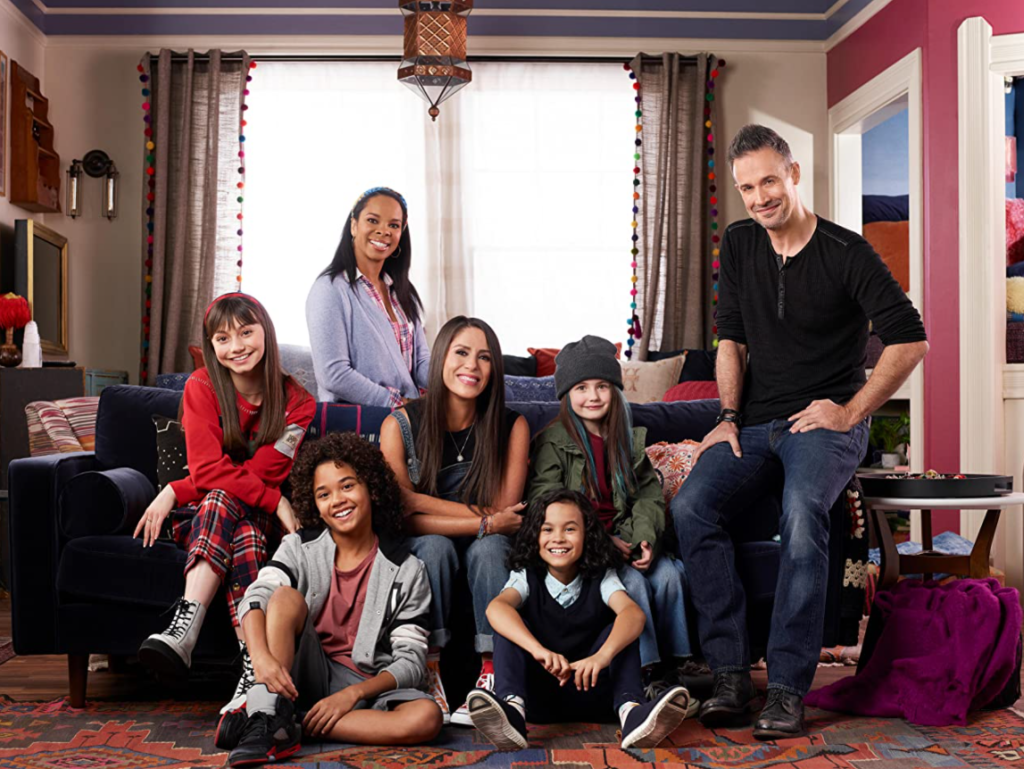 Izzy joining the family is just one of a few big changes in Daniel’s life, his parents’ divorce another though his character seems more understanding of the divorce than Izzy. “I think the biggest change for Daniel is that he goes from being the youngest and getting a lot of attention to being a middle child, and he’s not really sure how he feels about that. He’s pretty mature for his age, so even though I’m sure it’s a big change for him with his parents being divorced, I think he probably understands why it has to be that way.”

A family on-screen, the cast became close off-screen as well. Discussing his favorite memories from set, Oliver laughs as he feels cannot choose just one. “Just hanging out with everyone, really,” he says. “I love our Punky family, and I can’t wait to see them all again.”

That Punky family includes the original Punky Brewster herself Soleil Moon Frye as well as Freddie Prinze Jr., both having long careers in Hollywood.

“Soleil is such a nice person. She really is just so kind and generous and such an amazing person. We used to sit on set and talk about bands and our favorite music and stuff, and that was so cool. We both love ‘70s and ‘80s rock, so we connected with that!” the young actor recalls. “Her and Freddie are both such awesome actors so it was great to be able to watch them and learn from them. And Freddie – he used to let us play with his kendo sticks on our breaks, which was really fun.”

There is one member of the Punky family who is unfortunately absent from the show – George Gaynes who played Henry in the original series. After picking George as the one actor, past or present, he’d love to have guest star on the show, Oliver hints, “He does feature, though. He’s still very much part of the show.”

Filming Punky Brewster was not only a joy for the actor but also a major learning experience. He recalls, “I was a bit worried about whether I’d be able to remember all my lines, but actually it wasn’t as hard as I thought it would be! I was pretty happy about that.

Oliver continues, “I definitely learned a lot about every part of making the show because I’d never done a multi-cam before. I really learned a lot from watching the other cast as well. They’re all so talented and I feel so lucky to work with them.”

The ten episode first season of Punky Brewster is available to stream on Peacock now!