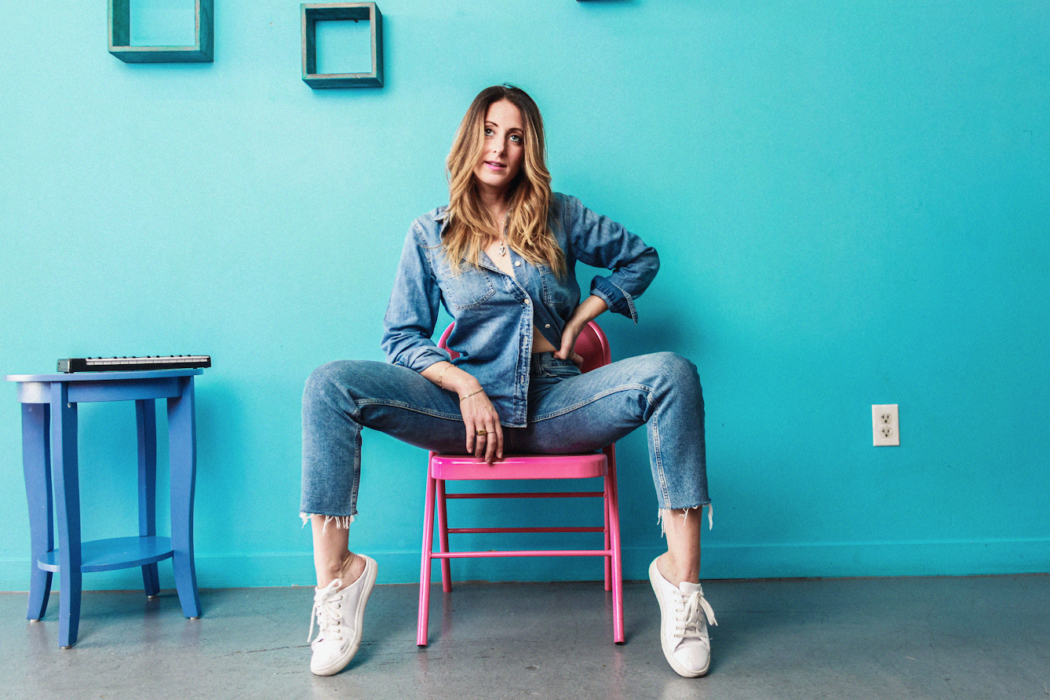 Writers know that they cannot control when inspiration hits them. Sometimes it strikes at the most opportune moment and other times it hits at the same instant that shampoo gets in your eye. Songwriting is much the same.

For Rebecca Perl, ideas for her songs can come at any time or place.

“I can be driving on the highway and a melody comes to me. I can be out to dinner with friends and a concept comes to me. The ideas roll in whenever they want to,” she says.

The singer-songwriter explains that she doesn’t have just one process, especially when managing an idea can be out of her control. However, once she has a grasp on what she wants to write about, she tends to have a system in place.

“When I sit and start to dissect everything, I typically dive into the lyrical content first because that’s what drives me the most,” Rebecca begins. “After I have a good concept and where the story will go is when I can sit and start creating the hook and the melodies.”

Love of all things, according to her, is where most of her songwriting inspiration comes from. “Anything that makes you feel something,” she adds. “I’m really passionate about solving the problem of a feeling or why you have a feeling, and if I can do that, I’m hooked.”

Rebecca’s recent single ‘Blame You’ stems from that very idea.

Break-ups, no matter how civil some may be, are never easy. Sometimes one or both parties are left wondering, questioning why things took a turn and play a game of ‘What if?’ about the relationship. Could they have done something different and salvaged the relationship? Why is it not worth fighting for anymore?

Rebecca is no different.

Citing it as fitting in the genre of emotional break-up songs, the singer-songwriter says, “[‘Blame You’ is] about the battle of the blame. Sometimes it’s hard to figure out why a relationship goes downhill and blaming the other person is the easiest way to find closure. That’s what I tried to convey in this song.”

The song itself was inspired by her own heartache a few years back.

“I went through a really tough break-up that I never thought would fall apart,” she says. “For a long time, it lingered in me and it was really hard to move on. I’d gone over it in my head how we could have fixed it or made it work and I wrote this song with that in mind. Although there was never really a solid answer, it was easier for me to not blame myself.”

With the release of the song also came a new music video, shot on the California coast. The video follows as Rebecca goes through the motions of trying to work through the break-up – through a drive, through sitting in silence, and through writing her feelings down.

The video is far from her first though there was a brief break on her YouTube channel before releasing ‘Blame You’.

“I’ve been releasing albums since I was about 21 but this song feels like a new chapter and I wanted it to feel that way for anyone listening that knew me back then,” Rebecca says.

Nerves usually creep in before sharing her music with the world but not this time. “I’m always nervous for a reaction! Will they like it? Will they not?” she states with a laugh. “This one felt right though, no matter the reaction.”

The singer-songwriter goes on to confess, “I didn’t think twice about if someone wouldn’t receive it well or something – probably for the first time in my life.”

However, that doesn’t make releasing a personal song easy. When asked if she is ever hesitant or insecure about sharing her vulnerability through her songs, Rebecca responds, “Always.” She continues, “Being vulnerable has been the hardest and most rewarding thing. Sometimes I let it just be an out of body experience so I don’t think about it too much – as if Rebecca Perl is just this other person that sings songs about her feelings and I’m just listening to it.”

Being able to do this is something that came with time. “I never thought I’d be able to be so vulnerable out in the open. It’s rewarding.”

Rebecca has been singing for most of her life. In fact, her musical journey began when she was just a kid.

“From a young age I knew I loved music,” she recalls. “At the time, I don’t think I realized the impact and the growth it would have on me as a person. But when I started writing, I understood that this wasn’t just something I loved to do, but something I needed to do, and I threw myself into learning what the industry was all about.”

It helped that she had the support of her family along the way, musicians themselves who understand the complexities of such a career. “I was a really shy kid growing up! When I told my parents I wrote a song and wanted to perform it, they almost fainted,” she laughs. “They were always so supportive of my passions and it’s a huge reason why I felt like I should pursue it.”

Her family and industry peers all shared similar advice that’s stuck with her throughout her career.

“Keep going and stay positive,” Rebecca repeats the advice. She admits, “Sounds so cliché but it’s the hardest thing to do when you don’t see as much of a return as you put in. So many times I’ve felt like giving up and doing something else.” She cites the support from her family and friends as playing a huge factor in keeping her going.

Thinking back to her 12-year-old self that had just picked up the guitar, she offers some words of wisdom that she’d bestow on her if she could. “Speaking your mind and vulnerability is one of the most powerful things in the world. Don’t be afraid of it.”

Born in New York and currently living in Los Angeles, Rebecca has had the privilege of dipping her toes in both music scenes. The two of which for all their similarities are also strikingly different.

I didn’t think twice about if someone wouldn’t receive it well or something – probably for the first time in my life.

Examining their differences, the singer-songwriter says, “For me, New York was always more of a live scene than LA. Both have such amazing bands and musicians. When I moved to LA, I shifted my focus from being a performer to being a songwriter. It was the perfect move for what I was doing.”

Rebecca shares how she never focused on co-writing in New York the way she does in LA. “When I moved here, I found it so easy to meet the most talented writers and artists that I now work with on a weekly basis. I’ve learned so much over the last few years.”

Experiencing both music scenes has left an impact on herself and her music. “New York made me want to experiment with my sound as an artist,” she explains. “I’ve gone through so many different sounds, genres, and bands – I think New York made me feel like I can and should do that.” On the other hand, LA gave Rebecca the opportunity to explore and write more pop music.

“I felt like I had to find my place instead of sitting in a few places,” she says of her sound. “But I’ve always loved pop music and felt like that’s where I fit.”

When asked how her music has evolved over the years, Rebecca first goes back to her initial influences like Dave Matthews Band, John Mayer, Michelle Branch, and Colbie Caillat. “I definitely experimented with different instruments and formed bands that went from having an acoustic guitar and a sax player, to a violin player, to an electric guitar player,” she says of the journey to find her sound. “Now, I feel more pop than ever before. Conceptually I’ve always written about love, life, and self-discovery, so that hasn’t changed so much – but lyrically I’ve found a great space for myself.”

Though there isn’t a concrete answer on when listeners can expect more music releases from Rebecca, she is keeping busy.

“I’m working on a few more songs for myself, which I didn’t even plan for! When you find songs that make your heart beat out of your chest because you feel like it’s you speaking, you just have to take it and put it out there,” she says. “That’s my rule for myself now.”

In addition to that, Rebecca adds, “I’m writing with a bunch of artists that I truly believe in and I’m super excited about their projects.”

Looking to the future, she is keeping her dreams alive and reaching for the stars. When asked who she’d love to collaborate with in time, the singer-songwriter answers, “Maybe Ed Sheeran? Julia Michaels? Sasha Sloane? John Mayer? Dan and Shay? There’s too many to choose!”

Of the artists listed, there is one in particular that Rebecca would love to share the stage with.

“John Mayer because he’s lyrically had such an impact on me. I would die to feel what he gives me up on a stage.”

Be sure to watch Rebecca’s new music video for ‘Blame You’ above and listen to it on Spotify and Apple Music!

Celina Smith is every bit as bubbly and electric as you’d imagine she’d be after watching her play Rebecca on Tyler Perry’s Young Dylan. Even…