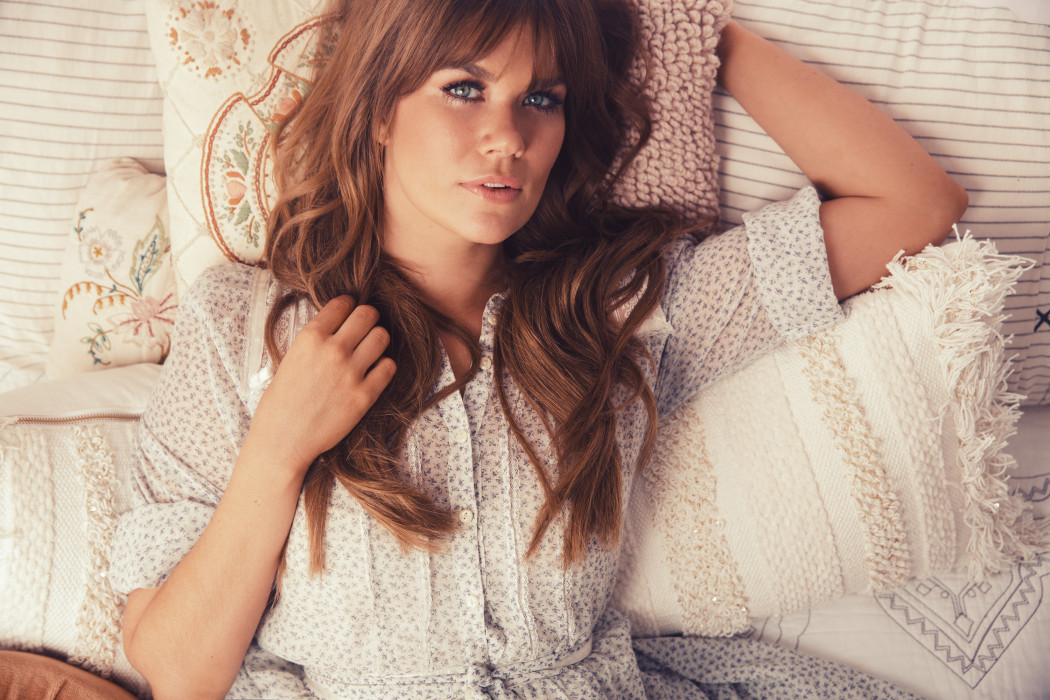 Prior to her recent album release, singer-songwriter Ruthie Collins spoke with Teenplicity to reflect on her journey in music and personal projects.

A sweet, soft voice to match her welcoming demeanor, Ruthie Collins invites listeners into her world once more with the release of her new album ‘Get Drunk and Cry’.

A follow-up to her self-titled 2014 EP, the singer describes her album to be pure country music. She enthusiastically exclaims that she co-wrote all ten tracks.

“They are all personal truths that I lived,” says Ruthie, adding a layer of depth and vulnerability to her album. Continuing to speak of the songs, she says, “They are so special to me.”

It was something I was always around and always loved.

Interested in music since a young age, Ruthie began singing and playing instruments at three. Starting with piano and violin, her talents have since expanded to include even more instruments and, undoubtedly, a greater vocal range. “My mom was a church organist/choir director/piano teacher,” she explains of her start, “so I would be in my little car seat hanging at choir rehearsal.” Those moments brought music close to her heart. “It was something I was always around and always loved.”

While the title track of her album ‘Get Drunk and Cry’ had originally been featured on her debut EP, it is given a new perspective as it sits amongst songs like “Mockingbird” and “You Don’t”. The vulnerability she showcases shines through and is easily able to work its way into all listener’s hearts.

“That was a very tough call!” Ruthie says of when it came down to deciding whether to publish the title song. “When I wrote that song, I remember thinking, ‘Wow I love this, but I don’t think I’ll ever play it for anyone.’ I’m so glad I got the nerve up though because after the first show I played it at, about ten different girls came up to talk to me about it,” she recalls of the experience. “They were all like, ‘Have you been reading my diary?’ That’s when I knew I had something special and very relatable.”

The relatability she maintains in ‘Get Drunk and Cry’ carries on throughout her album like on the track ‘Boys and Beaches’, which gives both sides of being in a relationship – falling in and out of love.

At the time of the interview, only half of the album was available for fans to listen to. Declaring the record as one that has been six years in the making, Ruthie reveals that there’s a part of her that, excitedly, can’t believe it’s finally happening!

The most challenging thing ended up being a blessing in disguise!

“Honestly, it’s a little bit of disbelief and a whole lot of grateful,” says the singer at the time before the album’s release. “I think this industry can break your heart over and over and over that you kind of have to become numb to it and put your head down and keep pushing and keep fighting.” Ruthie explores the fact that as helpful as that can be to overcome doubts and haters, it can dim the accomplishments a bit too.

“But the problem with that is sometimes you numb yourself to the highs as well. I try to always think of myself as a middle schooler when I’m going through something big and exciting in my career.” She explains, “I like to say to myself, “Think about that little middle school girl. She would’ve never believed that your debut record is going out to country radio, or that your video is on CMT, or that you just opened for that huge band!’ That way I can celebrate just how far I’ve really come.”

Hailing from a town in upstate New York just southwest of Buffalo, Ruthie found herself settling in across the country as she began in her music career. From the Berklee College of Music in Boston to musical director at a San Antonio church, her heart called her to Nashville. It was on this move that Ruthie found herself unveiling another passion.

Purchasing a house in the Tennessee city known to be the heart of country music, Ruthie knew that to make it her own and to make it cute, some renovations would be underway. What had started as a side project while she focused on her music became something so much bigger than she anticipated.

Some of these DIYs that these people do come out soooo perfect and also are a little intimidating!

“The most challenging thing ended up being a blessing in disguise!” says the musician of her home renovation. “I had a lot of little jobs here and there,” she describes of the house, “I call them $100 jobs. But Nashville is growing so fast and there are so many big renovations going on, I was having a really hard time getting handymen or contractors to come to work because they were so busy doing the million-dollar job down the street that they couldn’t make time for my $100.”

Ruthie’s solution was to get her hands dirty. She bought power tools and took a few lessons from her friend and sometimes drummer Danny Young and started doing everything herself. “It was definitely a learning work-in-progress but so much fun and so rewarding!”

Since, the multitalented artist has found herself hosting A&E’s vignette series “Home.Made” and her own “Pinterest Pass or Fail” YouTube series.

“I got a call from my agent that A&E was looking for a duo to host a show called ‘Home.Made,’” recalls Ruthie of the Saturday morning vignette show. “They were looking for people with big goofy personalities and I was like, ‘I know just the guy!’” She once again recruited her friend Danny as she knew he’d be perfect. “We sent an audition tape in and got the gig!”

Showcasing easy and simple DIY projects for around the house in just a few minutes, Ruthie describes a lot of the projects to be really cool and even revealed that herself and Danny helped the team decide on a lot of them. “Some of my favorites were the shiplap headboard and also the chalk painted chandelier… I have one of those in master bedroom!”

Incorporating the projects into her own life isn’t limited to just “Home.Made”. A lover of Pinterest, Ruthie calls the site inspiring and explains that she could lose hours of her life falling down a “Pinterest vortex”. It is because of this passion that she wanted to do a little series that made light of the idea that your DIYs have to be perfect. “They don’t!” she exclaims. “Some of these DIYs that these people do come out soooo perfect and also are a little intimidating!” She hopes with the series that she case show they’re just supposed to be fun.

“Some were projects I legit wanted to do for my own home,” she says of how she decides which attempts to showcase on YouTube. “And some I just thought were destined for failure and would be funny!”

That’s what it’s all about – learning to be happy with you as you are, and not trying to be like anyone else.

One of those failures in particular might be the chair fabric paint. While she showed she was doubtful in the beginning of its success, Ruthie kept her mind open and still tried her best to make it work. “That was a close call on that one because it looked SO pretty but felt a little crunchy!” she recalls of this Pinterest attempt. Also noted as one of her attempts that made her saddest to fail, she looks hopeful for the future. “Maybe there’d be a way to water the paint down more and do more coats?” she theorizes. “I don’t know but I was definitely bummed that that one failed.”

A favorite from Pinterest that succeeded was the DIY mason jar citronella lanterns. For Ruthie, she expresses that she thought they were so cool! “I make those every summer.” She enthuses, “They’re so easy to make and so pretty.”

The DIY bug didn’t just bite Ruthie. She reveals that her girlfriends call her all the time. “[They] are like, ‘I NEED that crate you just made on ‘Home.Made’!’ Or I’ll go over to their house and help them chalk paint their furniture or hang reclaimed wood wall or something.” With a smile, she says, “It definitely became a thing.”

Through everything that Ruthie has accomplished, both musically and with her DIY projects and series’, she says that she learned to stop worrying about the cool kids. It’s apparent in her music, as she immerses herself in whatever song is being performed and forgets about all else. It’s also apparent in her DIY videos, where she is carefree and having the time of her life.

“I don’t know that crafting or DIYing is considered cool… but I think it is!” she exclaims. “My buds call my ‘Granny Chic’ and I embrace it. That’s what it’s all about – learning to be happy with you as you are, and not trying to be like anyone else.”

As Ruthie’s fans continue to divulge themselves in repeatedly playing her long-awaited album, she reveals that she’s still writing songs “like a crazy person!”

“I went through A LOT this year and I love where I’m at, but I process and find therapy in songwriting,” explains the singer-songwriter. When discussing what’s to come in the remainder of 2017, she says, “Probably a lot of red wine, a lot of guitars and a lot of truth telling. But hopefully not as much crying!”

Ruthie Collins’ album “Get Drunk and Cry” is available on iTunes and Spotify now!

Be sure to catch her on A&E Saturday mornings from 9AM – 12PM or watch her YouTube series “Pinterest Pass or Fail”.