Animated films aimed towards children have proved time and time again that they can not only deliver beautiful storytelling but offer perspectives that’ll teach them valuable life lessons in the end. Cartoon Saloon’s latest film The Breadwinner is a wonderful example of that. Based on the book written by Deborah Ellis, The Breadwinner is about a young girl named Parvana who lives in Kabul, Afganistan under Taliban rule and must disguise herself as a boy in order to provide for her family.

Having roles in Degrassi: The Next Generation, Max & Shred, Dino Dana, and a production of Les Miserables, 13-year-old Saara Chaudry now got to take on one of her dream roles getting to be the voice of Parvana. “I have been inspired by Parvana since I was 9 years old,” she exclaims. “That’s when I read the book over March break. She was and still is my fictional character hero.” Explaining what it was about Parvana that stood out to her she says, “Parvana struck me as a strong and brave girl who would do anything for her family.” 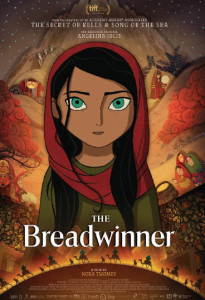 “Growing up in Canada, it is sometimes hard to relate to events and people who live halfway across the world. However, I think the film touches people in many different ways and I hope most people have a new perspective on what people, especially women and girls, in war-torn countries have to endure and go through,” Saara says about what she hopes people can walk away with. Western media very rarely give their viewers the opportunities to see other countries in either an honest light or (in some cases) a humane light which prevents viewers not from those places from realizing what is happening. “This film does a fantastic job of giving a very real perspective of the trials that people, and especially women and girls, face in war-torn countries. I hope this film starts a conversation that will, in turn, lead to changes to improve the condition for women and girls.”

[The Breadwinner] does a fantastic job of giving a very real perspective of the trials that people, especially women and girls, face in war-torn countries.

In The Breadwinner, Parvana’s father is imprisoned after it’s discovered that he taught Parvana how to read and encourages her to be educated despite the rule banning girls from learning. The book originally came out in 2000 and aside from growing up admiring Parvana, Saara also shares that she looked to a few other activists when portraying her, “I was inspired by Malala (Yousafzai) and her journey before and after being shot by the Taliban. I also find Nelson Mandela inspiring. My mother was born in South Africa and a few years ago we visited South Africa. I learned about Nelson Mandela’s struggle for equal rights for all South Africans and also had the opportunity to visit the prison that Nelson Mandela was in on Robin Island. He never gave up and became President after more than 20 years in prison under the harshest of conditions.”

“As a very lucky child growing up in Canada with every opportunity and one of the best educations in the world, it is hard to fully understand what other kids/girls just like me have to endure in other parts of the world. Deborah Ellis and The Breadwinner helped me to understand just how lucky I am and to raise my awareness about gender equality issues and to make me passionate about helping girls and helping them get an education,” Saara says once I ask how she thinks this story will help continue the conversation about gender inequality and the fight for girls to exercise their human right to an education.  “The Breadwinner is a very realistic story of the angst and suffering of women and girls in Afganistan but at the same time it is a story of hope, determination, and survival that everyone can relate to; Parvana is hopeful despite her dire circumstances.”

She continues, “It’s a story of millions of girls and women all over the world who do not have equality and are denied an education. I remember Deborah Ellis talking about all the potential we are missing out on. One of those girls may hold the answer to solve global warming or a cure for cancer, but their potential is being wasted by war and ignorance. When you educate a boy, you educate a man. When you educate a girl, you educate her family, her community, her country and the entire world.”

An advocate for girls education, herself, Saara passionately speaks about how much that point stuck with her and how easy it is for lack of opportunity to restrict what a person is allowed/can do. “I am very hopeful that this film will raise awareness and start conversations about the issues and that more people will be inspired to make a difference and hopefully change will follow,” she reflects.

Watching The Breadwinner, it’s easy to be amazed by how visually stunning it is and how the animators incorporated the countries culture in order to establish the work. “I know it sounds like a cliche, but I find the whole film visually exciting. I was amazed at how my voice was used in the film,” Saara admits. She mentions the first time that Parvana sees herself in the mirror as a boy as the moment that she really looked forward to seeing when she first watched it.

When you educate a girl, you educate her family, her community, her country, and the entire world.

As Saara said, the use of animation offers a relatability, but it also invites young people into the story. This is evident when Saara recalls a reaction she received from a young girl who saw the film, “One of the biggest surprises was when a 7-year-old girl came up to me after a public screening and said that she wanted to be just like Parvana! I asked her in what way, she replied, ‘I want to be brave and help people!’ The fact that other young girls are recognizing values and characteristics that they want to emulate in their lives is incredible.” She reiterates that for her, The Breadwinner is supposed to create awareness and start a conversation and the fact that the girl was able to do that means a lot to her.

Talking a little more about the content of the film, I ask Saara what was one of the most challenging moments in the film for her to do and she brings up the moment when Parvana is trying to get her father out of prison. “[The director] Nora Twomey made me cry (in a good way). This was one of the hardest scenes to do emotionally for me,” she reflects. “Nora was brilliant in extracting my emotions and pushing me to feel Parvana’s pain and suffering. I could feel Parvana’s anxiety and fear for her father and how desperately she wanted to rescue him,” Saara describes the powerful scene.

[The Breadwinner is] a story of millions for girls and women all over the world who do not have equality and are denied an education.

Another powerful part of the story is Parvana’s friendship with another young girl named Shauzia (Soma Chhaya). Similar to Parvana, Shauzia disguises herself as a boy in order to provide for her family. Having done this longer and been more on her own, Shauzia is tough with a bunch of street smarts and is willing to help Parvana out while Parvana offers Shauzia hope by telling her stories. 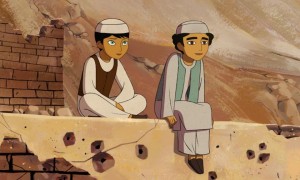 “The relationship between Parvana and Shauzia is very special and one of my favourites. It is also very relatable,” Saara says. For both her and Soma, these characters and this story meant a lot to them and as such, Parvana and Shauzia’s roles did too. “I think it was important for both of us to really show how they looked out for each other. But also that they both were just 11-year-old little girls. Although they were in a difficult situation, they still had time to get up to mischief and have fun and just be kids.”

While Saara isn’t sure on if any of the other books in the trilogy is in the works to be adapted into films, Saara shares that she’d love to see them be. Especially with all of the positive responses coming from viewers and critics alike that the film has received including a 2018 Golden Globe nomination for Best Animated Feature that was just announced today. One of the people Saara thanks for the impact The Breadwinner currently has is Angelina Jolie who executive produced it. “I have admired Angelina for many years for her acting and her humanitarian work. Her connection as executive producer of the film has helped in giving it more exposure than it may otherwise have had,” she says. Having met Angelina a few times now, Saara describes her as inspiring yet very down to earth. “The work that Angelina does for the UN and has done for girls and women in Afghanistan is incredible. I am very grateful for her involvement with The Breadwinner and that I have had the opportunity to meet and work with her.”

Closing out our interview, the two of us reflected on how significant a character that Parvana is and as such, how Saara would hope to use her platform and strength to make a difference as well. “As I have previously said, Parvana is my hero so those are very big shoes to fill. I hope I can use any influence and platform that I have through acting and through my involvement with The Breadwinner to encourage the conversation about the millions of girls and women all over the world who do not have equality and who are denied an education. We really have to just keep the topic alive and at the forefront,” she passionately explains. “I always go back in my mind to hearing Deborah Ellis talk about all the potential that we are missing out on,” she repeats: “One of the girls may hold the answer to global warming or a cure for cancer, but their potential is being wasted by war and ignorance. When you educate a boy you educate a man. When you educate a girl, she educates her family, her community, her country and the entire world ends up benefitting. That is what has stuck with me and motivates me to do whatever I can in my own small way.”