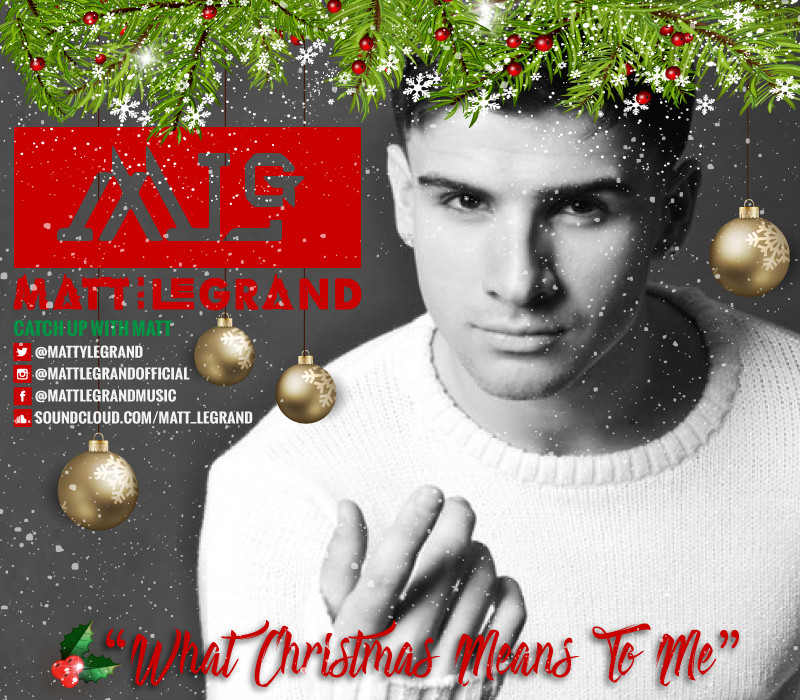 Emerging artist Matt LeGrand discusses how he got into music, his Christmas cover, and his favorite holiday memories.

Music has integrated its way into Matt LeGrand’s life in every place imaginable since he was a boy. From discovering the passion he has, to learning guitar, music has become like the other half of his soul. He recalls the moment that music took hold of his heart in such a way.

When he was eleven, his mother brought him to his first concert. The performance happened to be for one of his favorite bands and biggest influences, the Rolling Stones. “I listen to them almost every day,” Matt reveals.

What struck him most about the concert was the presence the group maintained while on stage. “Just seeing Mick Jagger and Keith [Richards] command the stage – command the whole entire stadium – that’s really what ignited me to really start doing music,” says the artist. “Ever since then, [my mom] got me my first guitar at eleven [and] it’s been music all the way.”

At the end of the day, I’m developing a sound of my own.

Matt looked to the many groups and bands he has loved as he began to learn guitar. He can’t help but enthuse over Green Day, in awe at how they’re still creating and performing, celebrating a wonderful career thus far. “I learned ‘When I Come Around’ by Green Day,” he says of the first song he could play on guitar. “They were my first love on guitar.”

Through performing, Matt relishes in the connection he can make with those around him. “From something I made that’s a song that I wrote or somebody else’s song – if I could just have that connection with somebody, basically, there is really no better feeling than that.” The singer reveals that this connection, every single time, reminds him of why he pursues music. “It’s just really a surreal feeling and I’m so happy to have the opportunity to do it every single day. I love it so much.”

For those unfamiliar with Matt’s sound, he describes it to definitely be pop. “I would describe it almost like going into a ‘Drake’ and ‘Justin Bieber’ lane.” However, it won’t be just generic music that sounds like those artists. “At the end of the day, I’m developing a sound of my own.” Matt exclaims, “I can’t wait for you guys to see what’s in store!”

Until then, fans will be able to enjoy his special musical cover for the holidays.

Taking on Stevie Wonder’s classic “What Christmas Means To Me,” Matt splashes with his own spin on the joyous song. The idea to cover this song stems from his lifelong love of the legend, having been a fan since he was little. “[The song] just really stuck with me,” says Matt, revealing that he would hear it in many holiday films growing up, that he knew the words, and he was digging the high energy it presented. “I was kind of thinking of doing something slower like ‘Have Yourself A Merry Little Christmas,’” admits the singer, though he ultimately stayed with the high, contagious energy that comes with “What Christmas Means To Me”.

“I watched a lot of Stevie’s live performances of ‘What Christmas Means To Me’ and I wanted to bring that same kind of energy, but with my own flavor.”

Matt stayed adamant that he would not imitate Stevie Wonder but instead, just put his own mark on the song. “All the credits go to him,” he says.

“There’s certain legends, icons, that if you cover [their music], you better get it right,” the singer reveals. “Hopefully I did get it right – I think I did. I love my cover,” he says confidently. “Of course, it’s nerve-wrecking; it’s getting put out to the public, I’m putting myself out there to be judged, and I’m okay with that.” He says that despite the nerves, he thinks he did great.

[To me, it means] spending time with those you love and just being in the moment with them.

“I recorded it in Atlanta,” begins Matt as he recalls the process to create his cover. “I knew the song so well that really the session only took maybe four hours.” He explains that usually due to other recordings, like the background vocals, a session could last at least a day, about a ten to twelve hour session. “It went so smooth,” he gushes about his time in the recording booth. “The team that I worked with in Atlanta were amazing and I couldn’t ask for a better team. It went really, really well.”

At the time of recording, it was October, which meant that the team had to bring the Christmas vibe to the studio a little early. “It was a little hard to get in the spirit but they did a wonderful job at [bringing] it in the studio and making it feel like it’s twenty degrees and snowing outside,” he praises with a laugh. “It was a really, really fun time.”

The song talks of things that remind the singer of Christmas and what it means to him, from decorations to being with the one they love. For Matt, Christmas means family. “[To me, it means] spending time with those you love and just being in the moment with them.”

One of Matt’s favorite holiday memories involves a special moment in his life. Last Christmas, him and his grandmother went to London to visit his mother. “It was kind of my first Christmas experience in her new home and it’s really special,” he explains. “We celebrated New Years as well. I brought my guitar, and everybody told me to play something and we were all having fun. They were singing words back to me.” Matt played other Christmas songs for everyone, enjoying the atmosphere that had been created and the connection he held with those around him. “Just the festivities were incredible and the energy! Meeting all my mom’s new friends, her new home – just experiencing it, it was wonderful.” He even reveals that he’ll be returning to London once more this year.

His mother was also on the receiving end of one of the best gifts he ever gave someone, the gift being a “stunning” necklace. Matt remembers exactly how the super secret mission for her gift went down two years prior.

“We were in Houston at the time that I got it. We were both in the mall and I had to sneak away from her.” He recounts how his mother had tried it on and everyone complimented how perfect it looked on her. Afterwards, Matt had to sneak away, go behind her back, and buy it. “Then she saw it two months later at Christmas – that was really special too and it looks really good on her!”

I just hope that it can bring that love and energy, and it be completely honest and true. That’s what I strive for.

Another great gift he gave someone is actually what he has planned this year. However, the idea came from a gift he received from a good friend of his, one of the best he’s ever gotten.

“It’s from a good organization I volunteer with at least once a week. It’s called Feed My Starving Children.” The organization’s goal is to be able to send specially crafted nutritious meals to malnourished children. “You can make Christmas donations,” Matt begins to explain. “You can either make an $80 donation and feed one kid for a whole entire year, or however much you want. But I got an $80 donation in my name to feed one kid for a whole entire year [as the gift].” Some of the benefits of donating, according to the artist, is a Christmas ornament to put on your tree as well as a picture of the kid that the donation helps feed. “I think that was by far the best gift I’ve ever gotten in my life.”

It inspired him it pass it on.

“I got it last year so this year, I’m getting everybody that!” he reveals. He goes on to joke, though the smile and sincerity is still clear in his voice, “So nobody can come to me and ask me for something materialistic. You’re all getting donations.”

Looking forward to the future, Matt contemplates his New Year’s resolutions. “Let’s see… isn’t the common one just hit the gym more?” he asks with a laugh. After momentarily adding that to his list, he reveals what he really hopes for 2018. “My New Year’s resolution is to keep on developing myself as an artist. Myself, personally, just strive for a more balanced life, more balanced career. Strive for more positivity and success. That’s my resolution.”

Discussing more of his hopes, the artist confesses, “There’s been talks that this coming up year is Matt LeGrand’s year. It’s going to be a very life changing year, my team and I are already feeling.”

He says that he hopes people will see him for who he truly is and not for somebody that he isn’t. “I hope my music can connect me with people and can help somebody’s day,” he fantasizes of 2018. “Whether turn someone’s day from a bad one to a good one or a great one to an amazing one… I just hope that it can bring that love and energy, and it be completely honest and true. That’s what I strive for,” he reveals. “I can only hope my music shows that.”

Be sure to watch Matt LeGrand’s music video for “What Christmas Means To Me” here!

Sometimes, life gives you a curve ball (or curve balls) and regardless of whether or not you know what to do, you have to…