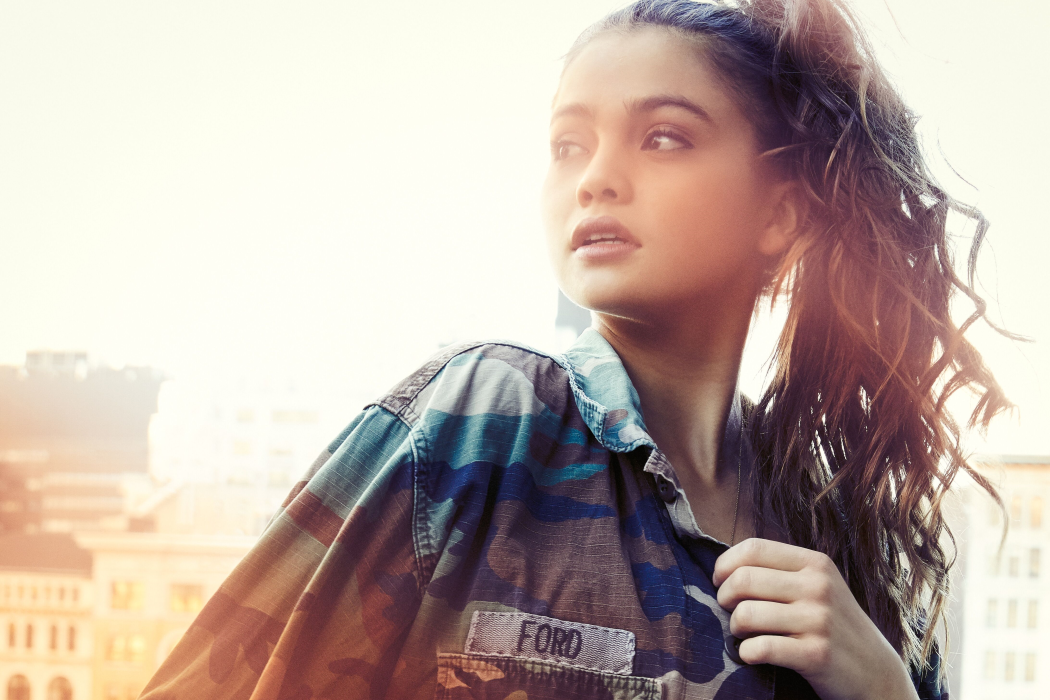 There is a buzzing of excitement that fills the air immediately. One can only imagine the smile that graces Siena Agudong’s features when the topic of No Good Nick comes up.

The first mention comes at the fact a billboard for the show went up in Times Square prior to the premiere. Her awe over the moment is still evident as she reflects on the moment when she saw it.

“Oh my gosh!” she exclaims. Trying to convey her feelings, she recalls the memory to be crazy. “It felt so amazing. I cannot believe it. It hasn’t even registered,” she says, the grin obvious in her voice as she continues on. “I just can’t believe that’s happening!”

The new Netflix show the billboard is for – No Good Nick – follows young teen Nick, portrayed by Siena, as she finagles her way into the lives of the Thompson family, set on getting revenge. Calling her character mischievous, the actress points out the “awesome” aspect that the Thompson family has no idea that Nick is conning them.

“She’s very sneaky and smart – she’s quick-witted,” the actress describes her character to be. “An old soul, sarcastic, very manipulative, and charming. She’s layered and there’s a lot of different things about her.” It’s important for her character to utilize all of these facets of her personality to accomplish what she needs to.

“[Nick] does all of these crazy cons and pulls all of these scams without anyone noticing,” continues Siena. The grin that slips onto her face is brief but noticeable in her voice as she can’t help but gush, “I think that’s so cool that I get to play all those different things.”

Then she always tries to find a way.

Though Nick may have succeeded unnoticed in her cons before, she finds herself up against many obstacles in various forms. Most prominently, those happen to be the constant suspicions of Jeremy Thompson, the eldest of the two Thompson children, and also the incredibly welcoming and loving nature of the rest of the family.

“Nick goes on a journey of coming into this family and her original plan is, ‘I’m going to get revenge on the Thompsons’!’ Things start to go a little bit south when she starts to get to know the family and they get to know her,” explains Siena. However, there are a lot of different problems that come up, causing Nick to rethink a few things, according to the actress. “Then she always tries to find a way.”

One of the problems that Nick runs into throughout the first part of season one is her conscious and her good heart. Every time she gets close to a completing a con and getting closer to accomplishing her goal, a conversation or situation within the Thompson family will cause her to change her ways momentarily. She backs out of a couple of cons at the last minute due to the love, support, and sentimentality of the Thompson family. Still, she moves right back on track, approaching the situation from a different perspective and with a different target in mind.

“She does go through some ups and downs of feelings,” says Siena. “She gets to know them and it’s hard for her to go through some things but then all of a sudden, there’s like a switch in her attitude.” Although it may be a hard pill to swallow, Nick realizes that some things must be done in order to help the other people in her life that she loves. “She’ll have to continue doing it even if she doesn’t want to do it.”

Though fans are still left in the dark about different aspects of Nick’s story, like why her father went to jail or why the Thompson family was chosen for revenge, there were some things that Siena and the cast didn’t know at first either.

According to the actress, the cast was told what would happen about halfway through the season. It didn’t stop them from theorizing about the ‘What ifs?’ of the show. 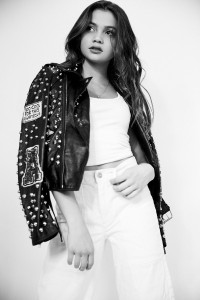 “The cast and I would try to figure it out and yeah, we definitely did [try]! We went through a lot of scenarios of, ‘Oh my gosh, what if this happens and we get to do this?’ But what turned out to be was even much better than what we expected.”

Giggling when she hears that Teenplicity has quite a few theories too, the actress enthuses, “That’s what’s so awesome! We’ve tried to figure it out and say, ‘Oh! This is going to happen! I guarantee it!’ But what’s so special is that you can never be certain of something because in the show, it’s like once you think you know what’s going on, new information is introduced to you that changes your whole [mindset].” With a smile she thinks, “Like, ‘Oh, man! Now I have to rethink this all!’”

Knowing parts of Nick’s story from the showrunners giving her a rundown of the character during auditions, Siena could immediately tell it was going to be something special. “I was so happy and so anxious, like, ‘Oh my gosh! I want to book this so bad!’” Even with the limited information provided to her, she says that she still didn’t expect anything that has happened. “It is so intense, but [the writers] also draw [those comedic], heartfelt moments in. It’s very intriguing and there’s a lot of moments that they touch on that I’m surprised and happy that they do.”

Those moments come in some highly emotional scenes where Siena continues to give her all in her performance. Balancing a delicate line between underselling and overselling the emotional turmoil her character is going through, she perfectly conveys Nick’s struggle and inner battle between what she wants to do and what she needs to do.

Exploring different emotions is one of the hardest and one of the most fun parts of filming for Siena. “It’s difficult to portray but it’s really awesome when it turns out because it’s very hard to go into that moment and experience these different things that I’m blessed enough to not have to go through.” Though it was hard, the young actress is grateful to have that because then, according to her, she grows as an actor.

Not just as an actor but as a growing teenager, they tell me things that they wish they had known when they were little and it helps me.

On the other hand, getting to know and work with the cast is one of the easiest aspects of filming, “Our chemistry is awesome and not just the cast – the crew as well. We’re such a family and we’re so close. I think that’s what makes it a whole lot easier.” That wonderful environment makes her “so happy”.

The cast is made up of budding teen stars like Kalama Epstein [Freeform’s The Fosters] and Lauren Lindsey Donzis [Disney Channel’s Liv and Maddie] and well-known veterans like Sean Astin [Lord of the Rings; The Goonies] and Melissa Joan Hart [Sabrina, the Teenage Witch; ABC Family/Freeform’s Melissa and Joey]. While she has valuable knowledge from her time with the whole cast, working alongside the latter two has been incomparable for the actress.

“I’ve learned so much from not only being able to watch them and watch what they do and how they carry themselves on set so professionally, they’ve helped me with [acting],” Siena says. She goes on to explain, “Mr. Sean helps me with drama and emotional scenes and Melissa helps me a lot with comedy. [She’ll be] telling me to try things this way or ‘Maybe this will work for you!’ or ‘Maybe think about this?’ or ‘Speed this up!’ It really helps me because I am so inspired by them.”

Looking up to the two as role models, she adds, “Seeing them and receiving so many tips from them is pretty awesome. Not just as an actor but as a growing teenager, they tell me things that they wish they had known when they were little and it helps me.”

Working together and bonding on set is something that Siena is used to for the many projects she’s worked on already. “It’s so lovely,” she says. She also points out how close the cast gets. “I think on every project, everyone just bonds as a family.” What makes No Good Nick stand out against the crowd is the role she gets to play as a con-artist. “You don’t get to really do [the cons] on the other shows. But cons really have to be thought through because the writers and the props and everyone has to think like a con-artist in order to pull off scams that legitimately would work and are so complex that even the readers won’t catch up on it!”

The twists and turns of the show are what makes Siena so excited for audiences to watch it. “I know for me, I love watching shows that are binge-worthy and keep you on your toes and make you want to click the next episode, so I think that’s something that’s pretty awesome!” she exclaims. In fact, nearly each episode picks up directly where the last one left off, continuing the minor cliff-hangers that audiences will journey on until the major one that is discovered at the end of part one.

Another aspect that has her so excited is the cast of characters everyone will meet. “You get to see so many different, diverse characters that all have something to them. Just seeing them go through this journey and all of the different, mysterious situations and cliff-hangers – I think that’s really exciting.”

Surprisingly, “exciting” isn’t one of the three words that Siena would use to describe season one (though it definitely does fit). Instead she gasps when asked to pick three words and takes a moment to collect her thoughts, the joy and passion thrumming under each word she chooses. “Unpredictable, heartfelt… and mysterious!”

The journey of filming has also been unpredictable as it caused Siena to learn quite a bit about herself.

“Me personally – like I said before about how Nick does go through a lot of situations that I’m grateful that I haven’t had to experience – I think it’s brought me a lot of gratefulness and a realization of how blessed I am that I don’t go through these situations because I see how much Nick struggles and how much people in real life going through these things do struggle with,” she says of what she’s learned. “And it’s brought me more of a maturity to be on set with everybody and grow up and learn from so many different people.”

“I think that’s the two things I’ve really grown… not only confidence in myself with acting,” Siena says, the pride in her voice evident as she reaffirms that she does feel more confident now, before continuing, “but also gratefulness and maturity.”

Siena: [Gasps, laughing] Oh my gosh! Well, definitely Nick! Then probably Liz [Melissa Joan Hart] because Liz is very strong-willed and I think she can fight her way in something. Like if someone catches her, then she can fight her way and use her authority to dig herself a hole and then get out of it.

No Good Nick is available for streaming on Netflix now!

***ABOVE PHOTO CREDIT TO NATHAN JOHNSON