Having roots in Oklahoma and branching out to New York and Los Angeles, Taylor Mosby knew she dreamed of being an artist. Previously, she has worked on projects that range from the drama of Criminal Minds, Grey’s Anatomy, Snowfall, and season 2 of A Girl Named Jo to the multi-cam sitcom Nicky, Ricky, Dicky, and Dawn.  Now, she’s working on the John Carcieri and Jordan Peele comedy, The Last OG.

The Last OG, now in its second season, follows Tray (Tracy Morgan) a recently released convict who returns to a gentrified Brooklyn and the discovery that his ex-girlfriend Shay (Tiffany Haddish) is married and raising their twins (Mosby and Dante Hoagland). “The Last OG shows the ups and downs of the adjustment process the family has to go through,” Taylor explains when I bring up the shows ability to use comedy as a way to shed light on families affected by mass incarceration and the after effect of it. “There are times when it feels extremely hard, especially for the mother in this case, and there are times when it feels like it is getting easier to adjust. It shows how the incarceration of a family member can take a toll on everyone.”

The premise of the show was essentially what made her interested in the first place, along with the talented names tied to the project. “When I found out that it was going to be about Tracy Morgan coming out of prison after 15 years, I immediately knew it was going to be hilarious. Not only that, but it was written by THE Jordan Peele? Oh yeah. This was definitely the show for me,” Taylor praises. Working with so many talented and well-established people in the industry, she’s gained and grown so much on set, “I’ve learned that confidence is key. Whenever you feel nervous in front of the camera, shake it off, be yourself, and you will always succeed in the end.” It also helps that Taylor gets the pleasure of playing the daughter of Tiffany Haddish and Tracy Morgan where she credits the writers for making the character of Amira the perfect mix of the two.

Whenever you feel nervous in front of the camera, shake it off, be yourself, and you will always succeed in the end. 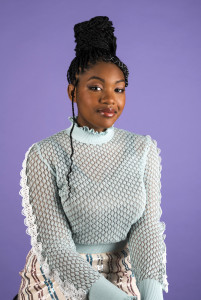 “Amira and her mom [Shay] have a great relationship. They have lots of funny moments together and they go to each other when everyone else irritates them,” she shares about her favorite dynamic to play with. The two are very often in sync and they always have each others backs which is definitely one of the shining moments of the show. “Even though her mother can get on her nerves sometimes, Amira appreciates everything her mother does for her because she knows how hard she had to work in order to provide a life for her and [Shazad].”

In this new season, Taylor ensures that we’ll get to see more of Amira and Shay together in their mother-daughter moments while Tray and Shazad get to shine too in some father-son moments. “We learn more about Tray and his life before jail and Shay learns a lot about herself this season. Amira and Shazad are adjusting to all of the new changes in their lives, and we might just meet some new characters,” Taylor hints adding that’s the general sense of all she can say about what’s to come this season.

She does further delve in on how this new season adds new depth to the story, “This season, the family has to take risks with Tray, often crossing their fingers in hope for a good outcome. Shay starts to open up a little in order for the kids to get to know their father because they never got the chance.”

As for the focus on Amira within a personal level, last season, we saw her having an interest in documentary and filmmaking through documenting Tray’s contribution to the neighborhood by serving food to the community. “I feel like Amira is interested in filmmaking because she enjoys looking at people’s stories from a bigger picture,” Taylor explains. “This season she does some writing here and there and we learn more about her other interests as well!”

I feel like Amira is interested in filmmaking because she enjoys looking at people’s stories from a bigger picture.

Besides The Last OG, Taylor can also be seen in Breakthrough releasing this Friday (April 19th) alongside Chrissy Metz (This is Us), Marcel Ruiz (One Day at a Time), Topher Grace (That 70s Show, BlackkKlansman), and Mike Coulter (Luke Cage). Based on the true story of 14-year-old John Smith who, in 2015, fell through ice on Lake Sainte Louise and ended up in a coma that he was not expected to recover from. “The miraculous story behind the movie Breakthrough is a great example of how faith, community, family, and love can come together no matter the situation and circumstances,” Taylor says. “I was so honored to be chosen to play Chayla in this movie and it was a different experience for me than any other role I’ve played because I was playing a real person and I was acting out their real experiences.”

“Chayla is a smart and funny girl who loves being with her friends. When she finds out about John and his chances of survival, she does not give up there. Chayla continued to pray and do everything she could for John because deep down she knew that God could do what man could not,” she talks about the role she has in the film. While the story mostly follows John’s adoptive parents (Metz and Josh Lucas), the community coming together to support the family and believe in John making a recovery is also there.

For Taylor’s hope about what the movie can bring, she hopes that viewers can feel inspired by the movie’s use of faith. “God truly can do anything and everything. When you stand strong in your beliefs and you don’t let anything shake you, amazing things can happen through faith,” Taylor passionately shares. “Even when it feels like all odds are against you, he can do the impossible.”

Taylor was also able to channel this energy into working with Kirk Franklin for “Oceans,” the main song for the project. “When I auditioned for Chayla, they asked me to sing ‘Oceans.’ I was never aware that I would be singing in the movie or on the soundtrack.  When I was singing this song, my goal was to make people feel what Chayla was feeling through her music. For them to feel her emotions through her notes. Making people feel something is always my goal when it comes to music,” she says about the song and the opportunity.

Making people feel something is always my goal when it comes to music.

“Music has been in my blood since I was little. As a matter of fact, I knew I wanted to sing before I knew I wanted to act. Music has always been second nature to me just like acting has and I’m so glad I get to mix the two in Breakthrough,” Taylor speaks on her love of music and her want to incorporate that into her career more. I follow up asking if she has any plans to release original music which she gives an excited yes to sharing to stay tuned for what’s to come.

While she doesn’t go into detail about the sound that we could expect from her (while you can find Youtube cover videos of her amazing vocals) she does share her inspirations which shows her love of multiple genres, sound, and creativity. “…Mine range from Sam Cooke to Ariana Grande. Some of my personal favorite artists are Tori Kelly, Boyz II Men, John Legend, Janelle Monáe, Michael Jackson, and Chloe x Halle. The list goes on and on really,” she says, “I always have a hard time choosing.”

Just like her music taste, her interest in acting projects vary. She shares her love for comedies while adding that the joy of dramas is the challenge. “I look for meaningful projects and ones that require a range of acting skills,” Taylor sums it up. Having an interest in working on projects where she gets to put her acting skills to work and be challenged with her role and defining characters while also loving music, it’s no question why she’d also be interested in a musical theater project.

“My dream role is to be in a movie like La La Land because it perfectly incorporated musical theater and film,” Taylor raves about the critically acclaimed film about highs and (mostly) lows about being struggling artists in LA. “It would be amazing to combine all my skills on screen and I could hopefully even get a chance to tap dance.”

You can stay up to date on all things Taylor Mosby by following her Instagram and Youtube accounts.

New episodes of The Last OG air Tuesday 10:30/9:30 pm central on TBS. You can stay up to date on all things The Last OG by following their Twitter account.

*Major season 3 spoilers below* Everything old can become new again. It’s a quote that has found itself being reinvented and taking on new…