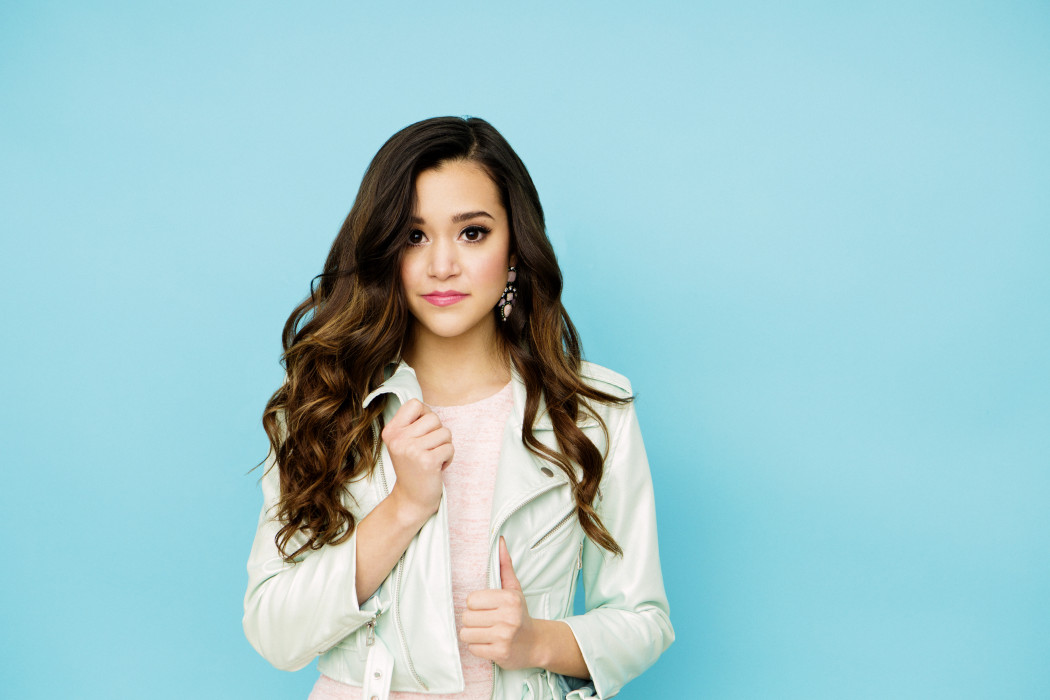 In 2009, when she was about 15 or 16 years old, Megan Nicole uploaded a cover of the Kings of Leon’s song, “Use Somebody.” Two years later, she released her first original song, “B-e-a-utiful.” Now, at the age of 21, Megan Nicole has her first EP, “Escape,” a mini-Youtube series called Let’s Be Friends (featuring Ashley Tisdale, Maddie Taylor, and Began Batoon), a new film coming out August 1st titled Summer Forever, on top of that her Sweet Dreams Tour begins August 26th.

In all of the excitement, we got the chance to ask the doe-eyed and uniquely dressed talent what we should get excited about with her tour and what her favorite part of shooting Summer Forever was.

When Megan Nicole surprised her fans with her North American tour dates, her fans couldn’t hold in their excitement. With emerging artist Sammi Sanchez as her opening act, Megan hinted that she’s looking forward to, “bringing a little glitter, some new music, and unicorns to each city.”

Teenplicity: What is the story behind your tour being called the “Sweet Dreams” tour?

Megan Nicole: One thing I love about music is that it is can take you away to another place for a moment. When people come to the show I hope it’s a place they can come to sing, to laugh, to dance, and feel inspired. I want to welcome them into my world for a night where I’ll share my stories and dreams with them through music. The “Sweet Dreams” tour is all about stepping out, doing the impossible and bringing the audience into my little fantasyland complete with unicorns.

T: Where do you get the inspiration from when it comes to planning your performances on tour? Do you have any surprises?

MN: I’ve been working on a lot of surprises for this tour. I really want to create a show unlike any I’ve done before, starting with the music. I want my fans to be able to hear versions of my songs that they can only experience live. I want to keep things exciting for the band and I, by changing up some of the set each night to make it unique. I’ll do this through cover songs; because a lot of people discovered me by listening to me sing the songs of many artists that I admire.

T: What are you most looking forward to seeing while traveling?

MN: One of my favorite things to do, when I’m in a different country or city, is to sit and people watch. I love seeing people interacting with each other, the way they greet one another and experiencing what creates the heartbeat of that city. I also love to try new foods! There are certain foods I haven’t opened myself up to experience yet, because some can be intimidating (like belute), but I’ve come a long way in allowing my self to try them. I mean, I lived on a strict diet of PB&J and Mac and Cheese as a kid and didn’t enjoy any green veggies until I was an adult! So, I’d say I’ve come a long way haha. 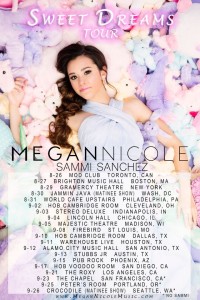 In Summer Forever, Megan Nicole plays the role of Sydney who must decide between the opportunity of a lifetime starting a music career, or continuing her path of going to college in Boston. Along with making that decision, her two best friends Chloe (Anna Grace) and Liv (Alyson Stoner) find themselves struggling with deciding the paths they want to take in life while all three of them attempt to keep their friendship in tact despite going their separate ways.

T: What was one of your favorite moments from filming Summer Forever?

MN: It was just such a pleasure to get to know some of the cast and crew. This was my first feature, and first anything to act in. The experience allowed me to learn so much by being surrounded by so many talented and hard working people. Not to mention, we laughed constantly on set. Some days, when Alyson, Anna Grace, and I would be doing a scene, we’d be having so much fun with it, we weren’t even sure if we got the shot we needed. But those are some of the genuine moments that made the final cut and the ones that will resonate with the viewers. The friendship between our characters (Sydney, Liv, and Chloe) really comes through in those scenes.

T: Why do you think people will love the movie?

MN: I think people will love this movie because not only is it relatable, sweet, and funny, but also, they’ll walk out singing the tunes from the film. This is a musical unlike any I’ve seen.

You can stay up to date on all things Summer Forever by following their Website and Twitter accounts.

Loss is never easy, especially when you’re told to bottle it up or risk retaliation. It’s not unlike a fairytale, to then find solace…