When Apple TV+ dropped the first three episodes of their latest series Invasion, audiences expected to tune in and see a show about aliens invading Earth. In a way, they did. But they were also quick to realize that the series is about so much more.

The invading aliens act more as a secondary character in the series. While their presence is being acknowledged, the focus is on how this state of uncertainty and panic heightens tense emotions and intimate situations in the characters’ lives.

Tara Moayedi portrays Sarah Malik in the series, the daughter of a women who suspects her husband is having an affair. She says of the show, “Invasion is not a typical sci-fi series. It is actually an intense drama, set on a backdrop of aliens invading the earth. The focus is the reactions and behaviors of the humans, rather than aliens.”

To have a show called Invasion yet not have the aliens as a leading character is a bold and daring choice. Instead, the show uses these newcomers to help drive the strained or complicated dynamics of the characters.

Discussing what it is like to be a part of such a character-driven science-fiction series, Tara says, “The experience was incredible because every character’s story in Invasion could be anybody else’s story. How the people will handle the complications when it gets magnified by something extraordinary and unpredictable. This character-driven show will make you pause and think, ‘What would I do if something similar happens to me!?’”

In fact, she believes that the audience expectations will be on seeing how the characters react to complicated situations – not what aliens are doing to humanity. “Invasion emphasizes that human alienation could be worse than aliens invading Earth and there will be no survival if we don’t trust each other.”

When it comes to Tara’s character Sarah, she says, “Sarah is very sensitive. She leans toward her family for support and survival but is aware of the crumbling relationship between her parents.” Going on the describe her character, the actress says, “Sarah is an intuitive, playful, and sweet kid. She understands situations beyond her age. Sarah faces the new reality of her life and the world upside down by aliens invading Earth.”

Sarah’s reality includes her relationships with her parents and her brother. The on-screen family works well together, creating dynamics that feel natural in the face of an incredible event.

“From the first moment I met the other Malik family members, I felt really comfortable. This helped me to imagine them as my real family.” Tara says of building the connection to her costars, “Each one of them is unique in a specific way and I was able to have a perfect bonding with them. We used to spend so much quality time together off camera. We still contact each other regularly every few days.” 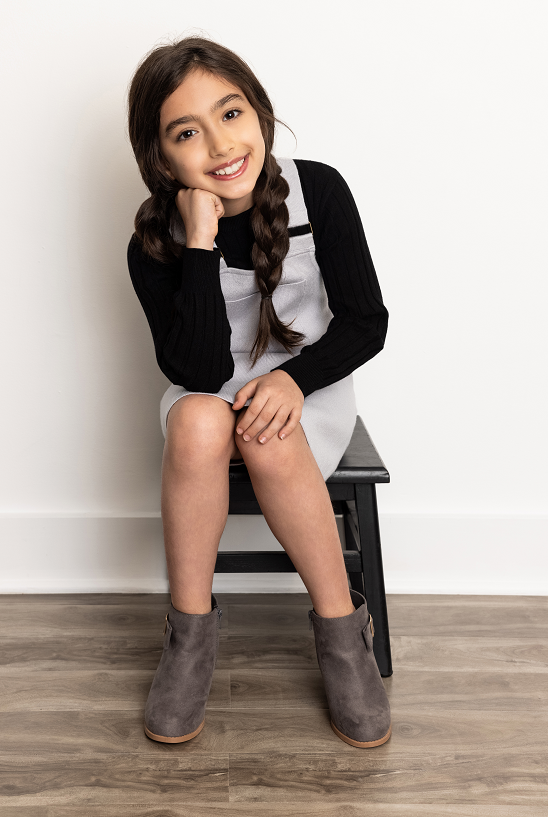 Invasion emphasizes that human alienation could be worse than aliens invading Earth and there will be no survival if we don’t trust each other.

The time spent filming Invasion had been an incredible experience for the young actress, one she still gushes about. “Every single moment was a beautiful memory for me,” she says of filming the series. “My most favorite one is the incredible experience I had working with the stunt team in episode six.”

Audiences will have to wait until next Friday see what exactly Tara is talking about. To assuage the wait, she does tease three words to describe the rest of season one. “Thrill. Surprises. Survival.”

A surprise in her own life happened when Tara saw the billboard for Invasion in Times Square. “When I started this show I knew it was be a big and important project, but I did not even imagine there would be a poster of the show with me on it, let alone on massive billboards in Times Square and other places. That was the most surprising part.”

When Tara isn’t seeing her face on a billboard in one of the busiest cities in the world, she likes to travel with her family. She’s been to Italy, Spain, Switzerland, and Iran, just to name a few.

“I love all the places I have visited but since I am a nature lover, my most favorite ones are: Swiss Alps, Banff National Park in Canada, and of course, Niagara Falls.” With so many places crossed off of her bucket list, there’s still many more she hopes to travel to. “Alaska, Japan, China, and the Maldives,” she shares as places she hopes to visit soon. “Life is too short and our planet has so many beautiful places to see.”

The pictures on the Instagram account dedicated to her travels are a great look at where she explores, but she takes so much more than snapshots when she goes somewhere. “I love to explore nature and meet new people from different cultures. I also try to find the similarities and major differences between different places,” the actress says.

When it comes to venturing in acting, Tara is just as open-minded. “I’d like to explore different genres, especially comedy,” she says of her future career plans. Those plans also include hopefully starring alongside Scarlett Johansson and Matthew McConaughey, her dream costars.

That only begs one question – what could her dream role be, with so much to look forward to next in her career? “My dream role is to be a superhero one day, like an Avenger.”

Jessica Morale Will ‘Never Be the Same’

When Jessica Morale released “Hunter” last year, the South Florida artist was looking to reclaim her agency and personhood with the hopes of inspiring…