About eight years ago, Nia Imani Hunter took the stage as young Nala in the Tony Award-winning musical The Lion King at the Minskoff Theatre on Broadway. Since then, she also appeared in Queen Latifah and Dolly Parton’s movie, Joyful Noise, as a choir member and more recently, provided her vocal ability to the Nina Simone biopic, Nina.

Falling in love with singing and writing at a young age, Nia Imani was born and raised in Atlanta, Georgia. And while she says that Atlanta music is far from what her style is, she feels like coming from Atlanta could receive some credit for the “urban sound it has”.

At the age of ten, she signed to SESAC, the Society of European Stage Authors and Composers, as an affiliate songwriter and music publisher. Now, she’s preparing to take on the voice of her generation with her debut EP, Luv, Drugs, & Other Stuff, where she offers her observations and experiences on the millennial mindset, starting with her recently released single, “Ruthless”.

A piano driven song, “Ruthless,” tells the story of a dysfunctional relationship that seems to have more faults than pros, but the narrator still tries to make it work regardless. “It was crazy amazing,” Nia Imani exclaimed about releasing the soulful song as her first single. “I got such great feedback from fans and industry people and now I’m even more excited to release the rest of my music. It only gets better from here!”

Named after two of the seven principles of Kwanzaa, the fifth day/principle, ‘Nia,’ meaning purpose and the final day/principle, ‘Imani,’ meaning faith, Nia Imani’s drive and dedication seemed, to begin with, her parents hope for her. “It’s something very powerful in African culture,” she said about her parents decision to give her, her name. “And I’m always working on living up to my name.”

“It honestly depends on my mood or what I’m doing in that moment,” Nia Imani commented on how she develops her music as both a songwriter and a producer. “Sometimes I’ll start humming what I want the instrumentation to sound like or sometimes I’ll have bits and pieces of the lyrics come to my head and then I’ll build from there.”

From her song, “Ruthless,” you can hear Nia Imani’s ability to tell a story through her lyrics. You can also tell that she puts a lot of thought into her songs and sound. “The most surprising theme or emotion would have to be love,” she admitted about her music. “I’ve written a few romantic songs in the past, but there’s one on the EP that sounded so pure to me when I wrote it. I guess certain things you have to live through to get the most genuine result.” 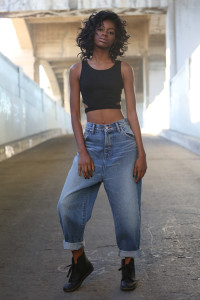 Her music is appropriately described as reminiscent of P!NK and the late, princess of R&B, Aaliyah. Put under the combo genre of ‘refreshing edginess and moody urban-alternative,’ Nia Imani admitted that she feels like her sound decided itself as opposed to her necessarily deciding her own sound. “That’s just the way my music evolved over time and I really enjoy the sound,” she said after letting out a little laugh.

“In my song ‘Luv, Drugs, & Other Stuff,’ there’s a lyric that says “…cause my heart is not in sync with my mind”, and that is 100% me,” she responded about what lyric of hers she felt was autobiographical. “A lot of times my heart will tell me to do one thing while my mind doesn’t agree. It’s almost like having the cartoon Angel & Devil on your shoulders always bickering about the best decision.”

Coming up with the title for her EP came through that song which, Nia Imani says, came to her after coming home from a friend’s birthday party, “Being there in that specific environment kind of got me thinking about the thought processes of our generation and what we enjoy talking about.”

Introducing Nia Imani as an artist, she says that the sound of the EP succeeds as an introduction to her as an artist and person, “I feel like Luv, Drugs, & Other Stuff has a slightly different sound from other music being released recently. It’s not necessarily following the “Trap Music Epidemic” that we’re having right now. As well as the topics that the EP is discussing, not many people are tackling things like that and it’s a major gateway for my future music.”

Continuing on with the discussion of the Millennial generation and her thought process, I asked what she thought of the strengths and weaknesses of our generation. “I believe curiosity is a major strength and weakness of our generation,” she began. “We love getting into new things and figuring it out as we go along, but it doesn’t always end up the way we planned.”

Counting songwriting, recording, and filming the music videos, the entire project, according to Nia Imani, took a little less than a year with the official release date for Nia Imani’s Luv, Drugs, & Other Stuff EP set for September 23rd. And while there are no official plans yet, she admits that she’s getting in preparation for a tour with her crew. 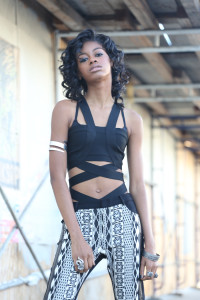 “I love the way my music works because it’s speaking from a teenager/young adult’s perspective,” Nia Imani began about how she hopes her music inspires listeners. “I’m approaching from a way that says, “This is what we’re experiencing” and letting others know that it’s okay.” Taking a similar page from the recently deceased, innovative singer-songwriter, Prince, she says, “We’re all going through the motions of figuring this crazy thing called life out. We all experiment, and it’s silly to expect us not to, but we just have to remember to learn and grow from it.”

Before closing out the interview, we talked a little about her time on Broadway, “I think Broadway gets you used to hard work. Having to work twelve hour days and being onstage non-stop, plus all the chaos happening backstage, really prepares you for everything else.”

I asked her if there was anything she missed about Broadway or The Lion King which she exclaimed, “All of it!” “I miss being on stage all the time, I miss the amazing cast and crew, the beautiful costumes, and I miss ordering food backstage,” she laughed.

“I would LOVE to go back for the role of the older Nala in The Lion King,” she began about any roles she’d love to play. “I love that part so much and I used to love watching the actress on stage during the second act,” she says referring to Broadway actress Kissy Simmons. “I’d also really like to play Velma Kelly in Chicago. I love the movie, haven’t been so fortunate to see the play yet, but Velma is amazing and I’d be honored to play her.”

Finally, I asked her if there was something that readers would probably be surprised to know about her, “I LOVE stuffed animals. I used to have tons of them on my bed but I got rid of them because of my allergies. I’m always looking for new ones, though!”

Luv, Drugs, and Other Stuff releases this year on September 23rd.