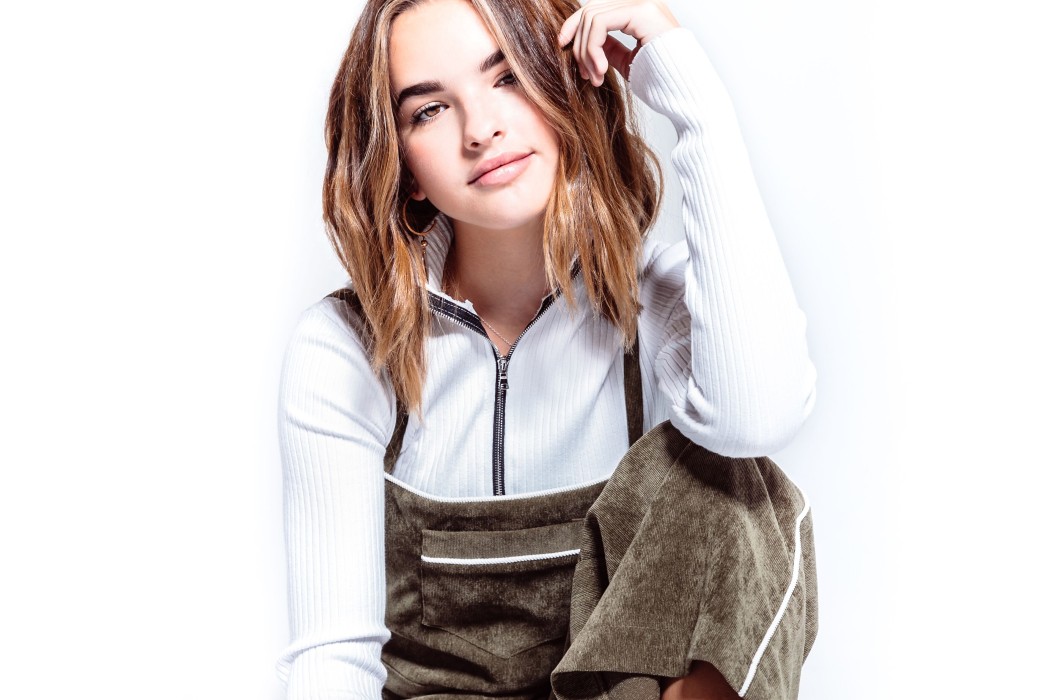 Already on the rise, Jenna Raine is ready to take the pop world by storm. Her debut EP is creating that foundation for her with its ear-catching tunes and smooth vocals.

But what really grabs listeners is her passion and confidence through every note.

“As a kid, I always had a passion for music,” the singer says. “I was singing throughout the house and performing for my family.” The moment when singing turned from a hobby into a potential career choice came early on.

“In third grade, I performed at the talent show and sang ‘Rolling in the Deep’ by Adele! After that, my parents realized I had true talent and I started singing lessons.”

I sat by the clock just waiting ‘til it turned midnight. I was nervous wreck.

It’s easy to tell in just the opening notes of any song from her new EP Nen just how incredible that talent is.

Her vocals coast through each lyric with a breeze, still able to encompass a softer tone in tracks like “Nen” while also able to take the power of her capabilities in a pop anthem like “A Letter to Me”. “Them” continues to showcase the kind of strength and possibilities that her voice holds as she sings about being true to oneself and not conforming to what others want. Each song, while exploring different experiences and topics, still serves the perfect pop formula with catchy lyrics, intoxicating beats, and her vocals hitting a flawless delivery every time.

“I love pop and acoustic so I wanted to include both in my EP,” Jenna says about the sound of her new releases. “Every single song has a piece of guitar in it, so it all blends well no matter what order you listen to it.”

This is a particularly fun aspect to think about as, when she embarks on her London tour with Max & Harvey tomorrow, Jenna dishes that she’ll be playing a couple instruments live. “I will be playing piano and acoustic guitar!” she says. So it comes as no surprise that she looks to Taylor Swift and Ed Sheeran when it comes to crafting her stage presence. “Taylor and Ed are amazing with crowd engagement,” she gushes. “They know how to keep a crowd going!”

The difference between this tour and her previous one is that her entire EP is out. “I can’t wait to perform [the songs] for the audience!”

For Jenna, there’s more riding on this than just performing songs. The music delves into a more personal territory for the singer than ever before. She had the chance to write on the songs of her EP with Candice Pillay, who was a writer for Rihanna’s “American Oxygen” and a number of Christina Aguilera songs. “I was really nervous releasing the songs because I wasn’t sure if anyone would like them,” Jenna says of the experience leading up to the release of Nen. “I sat by the clock just waiting ‘til it turned midnight. I was nervous wreck.”

All those nerves were for nothing, it seems, as there have been blasts of overwhelming positivity and support for her EP.

I can really connect with every part of it.

Looking back at the experience of writing for her debut, Jenna calls it absolutely amazing. “The writing process was definitely a journey. I learned a lot about myself through writing.” In fact, working alongside Candice taught her quite a bit too. “I hadn’t written much when I was working with Candice but she helped me with finding catchy melodies and lyrics. I loved working with her – she is amazingly talented.”

She also discovered that she had many things on her mind to sing about. “When writing a song, you would think it’d be hard to think of something to talk about and make the song about, but I had millions of ideas that were waiting to be used.”

Those ideas stemmed from simply growing up, according to the singer. “Sometimes I forget that I don’t quite live a normal life for a typical 15-year-old. My whole EP is about me and what I’ve learned in my life.”

The honesty in her music is what makes it easy for her fans to relate to it. When asked which song she feels resonates the most with fans, she picks “Us”.

“Everyone can relate to friendships and long-lost friendships. It doesn’t matter how old you are, friendship is timeless,” she says of the song which explores growing up and growing apart from someone you once held close.

While she doesn’t want to pick a favorite song off of Nen at first because “every song means something to me,” Jenna would choose “Us” because of its relatability. “I can really connect with every part of it.”

Going forward in 2019, the singer has plenty in store for fans. “I’ve been writing more music!” She adds with a tease and a wink, “Hoping to release some very soon!”

Wanting to say one final thing, Jenna gives a simple, but effective and clever, message to her fans.

“Always be yourself. You don’t gotta do it like them. <3”

FAN QUESTION: What are your musical influences?

You can get the Nen EP on iTunes, Spotify, Apple Music, and Google Play!

Elias Harger and His Excitement for Season Four of “Fuller House”